Noodling for Flatheads by Burkhard Bilger

Source of book: Borrowed from a friend of my brother.

Generally speaking, unless it is a Dirk Pitt book, I tend to take my brother’s book recommendations seriously: he is a devoted reader with a taste for thoughtful and interesting books. When I saw his little Facebook review of this one, I really wanted to read it. Fortunately, his friend (who lent it to him) was gracious enough to let me borrow it too. Since at least two of my kids are interested in reading it now, I suspect it will get a lot of mileage before he gets it back. 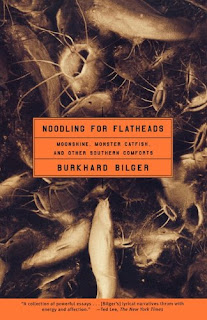 Burkhard Bilger is an interesting character - as interesting as his unusual name. He has written for The New Yorker for a couple decades, as well as a variety of literary and scientific publications. But he was, believe it or not, born and raised in Oklahoma, to German immigrants, in a decidedly non-upper-crust family. He thus combines a deep sympathy and understanding of rural America with a well educated and broad perspective. Since I wasn’t that familiar with him before this book, I looked him up and discovered that he is often compared favorably with John McPhee, who I recently discovered. I would agree that his writing is indeed in the same basic vein as McPhee, although with his own unique and enjoyable voice.

Noodling for Flatheads is a collection of eight long-form essays about interesting facets of Southern culture. Bilger writes, not from the coastal elite perspective of what he calls “southern grotesque,” but from a sympathetic, open-minded viewpoint. And, to that end, he experiences what he writes about. And yes, that includes catching giant catfish with his bare hands….by shoving his arm down their throats. (That’s the title essay, in case it wasn’t obvious.) What results is a series of fascinating looks at interesting people and the things they care about. As my brother put it, the essays are not in the least condescending, but bring a delightful degree of humanity to the people and things he writes about. (Again, definitely in the tradition of McPhee, and something that a lot of writers could learn from.)

The topics are both broad and unusual. I figured I might list them, because they aren’t obvious from the title. First is, of course, catfish hunting. And then there is cock fighting, moonshining, squirrel hunting (including eating the brains…), frog farming, racoon hunting, soul food, and the rolley holers...which is kind of the game of marbles with a heavy dose of “ever so much more so.” It’s an interesting slice, with a bit of diversity too, not just the usual white southern stuff.

I must say, I quite enjoyed this book. Bilger has a real knack for interviewing people, and he brings the characters to life. Also, because he participates in most of the activities he writes about, his essays feel more involved than a dispassionate observation. His writing is also excellent. (Again, I am reminded of McPhee: the prose isn’t flowery, but the command of the language and precise use of words is delightful. Things come alive because of the good writing.)

Bilger essentially writes, as he says, of the difference between the “two Americas.” No, not, as John Edwards observed, the elites and the average person; but of the surface America and the grey market, so to speak, that exists beyond the official laws.

I often felt as though there were two Americas: the one we legislate and the one just down the street, inside and abandoned warehouse or a neighbor’s basement; the one on television and the one where Santeria rituals are performed and snakes handled, where moonshine glimmers and gamecocks fight.

This is in the context of cockfighting (which is actually pretty dang big here in Bakersfield, despite being illegal…), but it could apply to any number of things. I have certainly eaten grey market food, and seen enough stuff in the neighborhoods I have lived in (from chicharones to fireworks) that are not, strictly speaking, legal. Bilger does note, though, that as brutal as cockfighting is, the birds actually live a better life than those raised in factory farms. Morality is often relative…

In the chapter about moonshine, Bilger makes another spot-on observation.

American history, some say, could be written in terms of whiskey as well as wars and wandering tribes, and the result might say more about the American character -- about the perennial battle between liberty and the rule of law.

Booze has been a part of the history of the New World, for better or worse, from the rum trade that fed slavery to the moonshiners in my wife’s ancestry to Prohibition to the modern craft beer movement. There is something uniquely American about our relationship to ethanol. And, this being America, race is inseparably linked to pretty much everything. This bit is enlightening, following a history of moonshining, and the ways that nasty stuff was used to adulterate booze for the out-of-town market.

A few of the moonshiners I talked to said these were nothing but scare stories, passed around by revenuers. But others admitted that there have always been two sorts of moonshine: the decent stuff, which is kept at home and sold to neighbors, and “nigger likker,” as they called it, shipped to anonymous shot houses and nip jounts in the big city. It’s in such areas that moonshine has taken its worst toll. In 1928 sixty died of wood alcohol poisoning in New York alone, and in 1930 authorities estimated that fifteen thousand people had been partially paralyzed by “Jake,” a type of moonshine made with Jamaica ginger.

The chapter on squirrel hunting is likewise filled with fascinating intersections. During the AIDS crisis, “plague porn” really took off, and those wounded by the Southern Baptist horseshit of “AIDS is God’s wrath on gays” latched on to the “eating squirrel brains gives demented hillbillies mad cow disease” bandwagon. Neither was exactly true, of course. AIDS is a threat to humanity, and the victims are often the “innocent,” not the “guilty.” (Women and children in Africa and elsewhere come to mind.) Likewise, it turns out that squirrels most likely do not carry prion disease, and that the clusters in the South were simply genetic. But the comedians certainly took the story and ran with it. Dave Barry, one of my favorites in my teen years, asked the obvious question: “Since when do squirrels have brains?”

I also enjoyed the chapter on frog farming. Which still isn’t a thing. Basically, frogs seem to resist being raised in captivity. Sure, they may breed, but diseases get them. Or any number of other issues. And they don’t make money. Anyway, I have had frog legs. They are delicious. But not easy to find, for reasons this chapter makes clear. (Also, not everyone likes them…) But there is a great line in the book about, well, here’s the whole paragraph.

Ken Holyoak’s fish hatchery, frog farm, and wild hog preserve sits on a small gravel drive guarded by a very large fish. Eight feet long and six feet high, bristling with exotic fins and fluorescent purple-and-yellow scales, the fish looks like a cross between a bluegill and a beetle -- a Volkswagen Beetle, that is, circa 1969 -- and hovers above passing cars as if scanning for minnows. Even Holyoak doesn’t recognize its species. “I just asked this feller that goes to my church to make me a feesh,” he says, “and that’s what he come up with.”

Also excellent is the chapter on Soul Food. Which I rather enjoy eating, although I haven’t had all of the various entrails yet. Bilger opens with a quote from Ralph Ellison’s Invisible Man.

What a group of people we were, I thought. Why, you could cause us the greatest humiliation simply by confronting us with something we liked. Not all of us, but so many. Simply walking up and shaking a set of chitterlings or a well-boiled hog maw at them during the clear light of day!

Bilger notes, again, with great perception, that a lot of people see food as a matter of “purity”: they are pure, and the lower classes eat unclean food. (And yes, this is absolutely tied up with both race and class in our nation.)

The world is full of people who define themselves by what they won’t eat: macrobiotics, vegetarians, weight watchers, and weight lifters. But sometimes the more difficult, more audacious act is to define yourself by what you will eat -- especially if it turns everyone else’s stomach.

Both my wife and I have earned our bona fides by eating fish with the heads on -- and the eyeballs. Personally, I view food as (in part) a means of connecting with other cultures. Which means I will try all kinds of stuff, largely as a connection between others and myself.

There is so much more in this book than the few things I have mentioned in this post. It is fascinating, with well-told stories, and a slice of life unfamiliar to Californians like myself. Bilger’s empathetic and human connection to those he interviews makes this book particularly sweet. It is a good read, worth seeking out.

Posted by Diary of an Autodidact at 9:47 PM