The Merry Wives of Windsor by William Shakespeare

Because of Covid-19, theaters are closed here in California, and the Utah Shakespeare Festival is cancelled. Thus, I doubt I am going to have many chances to see live theater in the near future. We have been getting by with video sources, even though they are not the same. The Globe in London is releasing filmed performances of various plays, including this one.

We first saw this play at Fresno’s “Shakespeare in the Park” a number of years ago. The kids immediately loved it, what with laundry baskets and all. Critics have not been so enthralled with the play, considering it one of Shakespeare’s weaker works. Audiences and opera composers seem to have sided with my kids rather than the critics.

The play features Sir John Falstaff, the debauched and obese knight who steals the show in Henry IV Part I. In fact, Falstaff was so popular that Shakespeare wrote Henry IV Part II in order to cash in on the popularity. (Which proves, by the way, that neither shameless sequels nor cashing in are a new thing.) Eventually, Shakespeare decided to give Sir John his own play.

Despite featuring Falstaff and being ostensibly set in the time of Henry IV, the play is really a spoof of 16th Century middle class society.

Sir John, broke again, decides to mend his fortunes by seducing a wealthy married woman. Well, two of them. He figures he might as well try both and see if he can land one. His buddies refuse to be the messengers, and instead, turn him in to the husbands. One of them laughs it off, but the other takes it all too seriously and is consumed with jealousy. He disguises himself and buddies up to Falstaff, asking him to seduce the wife so that he can have a chance at her after she is already “fallen.”

Meanwhile, the two wives, who are smarter than any of the men of course, simply compare the love letters, laugh, and decide to play tricks on Falstaff.

First, he is forced to hide in a basket of laundry and thrown into the Thames. Then he is disguised as a fat aunt, mistaken for a witch, and beaten soundly. The final humiliation is when he dresses up for a fairy revel in which he is to meet his intended, but is harassed instead by youths paid to give him the business.

It is hard to really feel too sorry for Falstaff. After all, he is trying to seduce married women. And he is a lech, even by Elizabethan standards. Furthermore, the main injuries are to his ego, not his body. But still, one might find a scrap of sympathy for an old man who is treated infamously. (As he claims.)

The secondary plot involves the daughter of one of the women, who is being courted by three men. The one she loves, Fenton, does not meet with the approval of either of her parents. Her mother prefers the French doctor, Caius; while her father prefers the Welsh preacher, Sir Hugh. The two are ludicrous characters, challenging each other to a duel, but are unable to complete it after they are directed to different locations.

This being a comedy, you know it will end in a satisfactory marriage, and a comeuppance for each of the deserving persons.

For the most part, the play is slapstick silliness rather than profound psychological analysis. But I did notice one thing in particular this time. The “merry wives” have complex and interesting motives. On the one hand, it is flattering to be pursued, even if by a silly rake like Falstaff. Thus, they play along to a point...not enough to actually cross the line into adultery, but enough to get off a bit on the fun. It is as if they are able to get some of the emotional gratification of an affair, without cheating. In this version, they make a mild nod to S&M in their flirtation.

Shakespeare also gets a lot of humor out of the class and nationality differences. His Welshman is nearly unintelligible, and his French doctor is so full of botched Latin and worse English that the London audiences of his day must have laughed themselves silly. For American audiences of today, some of the humor is lost perhaps, but at least poking fun at the French and Welsh doesn’t seem mean-spirited like it might have in Shakespeare’s day. Being either French or Welsh in America of the 21st Century doesn’t carry negative social consequences to any significant degree.

The Globe version was set more or less in the 1930s, as far as fashion. In spirit, of course, it could be anywhere - or any place. While in general the acting was good, I particularly liked the interaction between Falstaff and the wives. All three parts were filled by fairly big names. Pierce Quigley (with a long list of stage and screen credits) played Falstaff. My only quibble with him is that he is too thin, even with a fat suit. But he did bring a good vibe to the part, sympathetic, calculating, egotistical, and wounded in turn. (The best Falstaff I have ever seen, though, is still Tom Hanks, at a live performance of the Henry plays in Los Angeles. That was just amazing.) 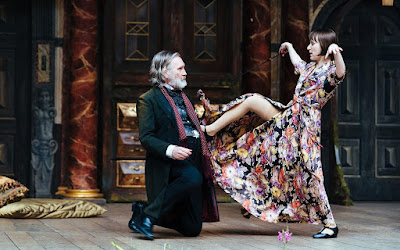 Sarah Finigan and Bryony Hannah, as Mistress Page and Mistress Ford respectively, were hilarious. Their characters were clearly having way too much fun with their tricks, and they were totally believable as co-conspirators. I did not know much about either, but Finigan is also a veteran actor both on stage and screen, while Hannah is best known for her work on Call the Midwife. She is pretty tiny compared to the other actors (who themselves aren’t huge, actually) and looked the part of the little British housewife.

As with all Globe productions, the live music was fun. In this case, mostly Dixieland Jazz from a small ensemble. The dance numbers were definitely old New Orleans, with extravagant Mardi Gras costumes. Overall, it was good fun, and well done.

Posted by Diary of an Autodidact at 9:38 PM