Source of Book: Borrowed from the library

This is my 4th annual installment of reviews for Black History Month. (February, for those who ignore that sort of thing.) I previously discussed the following:

50 Years and Other Poems by James Weldon Johnson
Their Eyes Were Watching God by Zora Neale Hurston
The Souls of Black Folk by W.E.B. DuBois

In the last of these, I noted that there are some gaps in my education, as the 20th Century was largely neglected by the curriculum we used.

I might mention that this is one area in which my education was lacking, though this was not due so much to a hostility toward Black History as to a neglect of the issues of the Twentieth Century. The World Wars and the Cold War took up most of the available textbook space, so many of the cultural issues were given no more than a quick mention. Sure, Martin Luther King Jr. was mentioned, and Du Bois and Malcolm X, but detailed treatments were not provided. I did, however, get a good background in the Civil War. My mom made sure that I read books about the Underground Railroad, lynchings, and the Jim Crow era. I think I fared a little better in Literature in that I was at least exposed to Countee Cullen, James Weldon Johnson, and others of the Harlem Renaissance. However, as in the case of History, little time was given to works after the 1940s.

Whatever the case, it has been enlightening and fascinating to come to this material later in life. The great debates regarding the Race Question still rage today, and the after effects of slavery and segregation continue to be an important facet of our society, whether we admit it or not.

Thus, my plan to fill in some of the gaps as an adult.

I should also mention Alexandre Dumas, as he rarely gets credit as a (French)African author, even though he was descended from slaves. I reviewed The Count of Monte Cristo several years ago.

One initial note: this book should not be confused with The Invisible Man by H. G. Wells. What a difference a simple article makes... 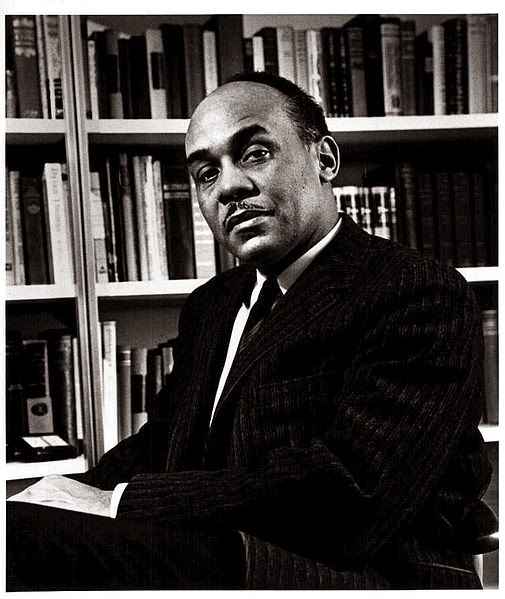 
Invisible Man was written in the 1950s, in the era leading up to the rallies of Martin Luther King Jr., the Civil Rights Movement, and the final passage of Civil Rights legislation. One can certainly see how Ellison’s themes tied in with the Movement. He also explores the uneasy relationship between the Communists and African Americans like Ellison, who felt that he and his fellows were used when convenient and betrayed likewise when they weren’t.

One of the things that struck me while reading was that there were realistic sections, and ones that were completely implausible. In some cases, these wilder flights of fancy seemed disconnected with the narrative, not really fitting with the story, and so different in tone as to form more of a contrast than a cohesion.

As I usually do, I read the book first, before reading about the book. There are exceptions to my rule. I generally look up any literary, historical, and mythological references I don’t recognize. I keep a dictionary at hand. But I try not to come with too many preconceived notions about a book’s themes and meanings. Afterward, I read up on the author and his times, and, in the case of books like this, try to find some ideas about meaning that might enhance my understanding.

In this particular case, it was helpful to think of the book as symbolist, rather than realist. Several scenes then fell into place, particularly the surreal hospital scene, which I couldn’t decide whether to take literally, as a dream, or as a metaphor for the experience of the protagonist. All three at once can make some sort of sense, but the metaphorical use fits best with the thematic arc. Also, the development of the protagonist seemed unnatural. He goes from being callow and naive to an orator in the space of a chapter, and there is little that would prepare one for the shift. His thinking, likewise, seems to make large jumps. Again, though, this makes more sense if he is viewed as a symbol rather than a realistic character.

I’ll admit I am not particularly well versed in the Symbolist movement. I’m probably most familiar with precursors such as William Blake and Edgar Allen Poe. I’ve read some T. S. Eliot (and not just Old Possum’s Book of Practical Cats), and I think that might be the best analogy I can draw to the Symbolist influenced sections of the book.

Eyes I dare not meet in dreams
In death's dream kingdom
These do not appear:
There, the eyes are
Sunlight on a broken column
There, is a tree swinging
And voices are
In the wind's singing
More distant and more solemn
Than a fading star.

Let me be no nearer
In death's dream kingdom
Let me also wear
Such deliberate disguises
Rat's coat, crowskin, crossed staves
In a field
Behaving as the wind behaves
No nearer—

Not that final meeting
In the twilight kingdom

This passage from “The Hollow Men” reminds me of Ellison’s writing, and I wonder if it might have been an influence. Even the titles have something in common. Ellison once said that Eliot’s “The Waste Land” was a “moment of awakening” for him, so this seems plausible.

Another influence which Ellison admitted was that of Dostoevsky’s Notes from Underground. Although Ellison doesn’t delve as much into the dark recesses of the human soul as Dostoevsky, instead looking more outward than inward, there are clear parallels. The eventual life underground, invisible to society. The cynicism from years of crushed opportunity. Even the use of symbolism could be paralleled, as both extrapolate from individual events, realistic or not, to greater issues within society.

Another question I had about the realism arose because of the very nature of the times in which it was written. So much has changed, even in the deep south, so that some of the events described may well have seemed realistic to one who lived through Jim Crow, race riots, and the heady days of Communism before the genocides of Stalin and others came to light. Or, it may not. It’s hard to tell.

Some of the observations ring true today, though. There is still the idea, both a fear and an idol, of uncontrollable Black sexuality. Within the book, the Black man is feared as a rapist, but is also sought for a rape fantasy. The hypocritical preacher/pimp/charlatan may be a stereotype, but plenty of examples exist today. (Hello, Creflo Dollar. Not that slimy preachers out to make a buck are limited to the African American population either.) One other character type struck me particularly, though: the Black man who trades on racist Black prejudice for a laugh and a buck. In this story, one of the characters descends from the role as a community leader to selling “Sambo” dolls. This didn’t go away with Amos and Andy. One of the reasons that I really haven’t been able to get into much of modern hip hop is that it feels like the same sort of thing. Selling Black stereotypes to White audiences. Bitches and bling, a Benz and a fo’five. Some things haven’t changed.

On that note, there was a moment early in the story, when a mentally ill veteran comments to the protagonist that the wealthy, elderly White man he is driving around - a donor to the college for African Americans that the protagonist is attending - that to this rich man, the black student is “a mark on the score-card of your achievement, a thing and not a man…” And that is the crux of the story. When he can be seen at all, he is a mere thing, a statistic, a pawn. Whether to the rich benefactors with their (probably) good intentions, to the Communists with their “greater” goals that justify sacrificing whole neighborhoods, or to the cops who are unable or unwilling to treat those of darker skin with common humanity and dignity.

One final note. After the protagonist is given the shaft in a way he doesn’t realize until the truth is discovered, he is told by the person who just threw him under the bus that he shouldn’t become “bitter,” or that will stand in the way of his inevitable success. I didn’t see that one coming. I touched on this a bit in my post on cancer. As in this book, the word is often used by those who abuse to shed their own responsibility, and make the damage and hurt that they cause the “fault” of the victim. Yet another example of how good literature illuminates real life, whether the technique is realism, symbolism, or outright fantasy.
Posted by Diary of an Autodidact at 9:17 PM