After my post on Douglas Phillips (and related follow-up post), I did get some significant interest in my story about John Thompson. My experience was quite brief, as will be seen. I’ll also note that the events occurred more than 15 years ago, when I was a law school student. The communications took place by e-mail, on computers that still used dial-up modems and ran Windows 3.1, if my memory serves. Add this to the fact that I was still living with my parents at the time, and using their computers, and that explains why the original communications have - as far as I know - long since disappeared. I will have to work from my own memory on this one.

John Thompson, for those who are not intimately familiar with the figures of the Christian Patriarchy movement, was a founder, along with Douglas Phillips, Scott Brown, and several other familiar names, of the Family Integrated Church movement, and also helped develop the most extreme version of the courtship/betrothal model also espoused by Jonathan Lindvall. I discussed that facet here. For more on the FIC movement, my friend and fellow blogger That Mom has written extensively about her own experiences with FIC affiliated churches on her blog.

So anyway, I was in the early stage of law school at the law school originally affiliated with Bill Gothard’s organization (but which has now largely severed ties). I was part of the very first class, so my fellow students and I were both Guinea pigs and celebrities of a sort within the greater ultraconservative home school community, apparently (although I didn’t realise it.) I had just recently met my wife and her family, but it would be over a year before I would ask her out.

One day, out of the blue, my father got a peculiar e-mail from a man named John Thompson. Now, I had never heard of Thompson, but he explained who he was in the e-mail. It appears that it had come to Thompson’s ears that I was not only a law student, but also a violinist. Since his daughters were (and are) talented musicians, this seemed to him to be a natural fit. He asked if my father would be interested in arranging a “courtship” between me and one of his daughters. He described her many virtues. Her housekeeping skills. The things that would make her an excellent wife. I remember the all-important phrase “quiet and submissive spirit” being used. The idea was that if the fathers decided we were suitable, we would begin the “courtship” process. I don’t know if my family quite understood at that time that this young lady and I would have been considered irrevocably engaged - betrothed - from that point onward, even though we had never met.

As I’ve mentioned, my family didn’t get particularly deep into the patriarchy and betrothal portions of the movement at all, so my father decided to forward the e-mail to all the rest of us.

If my memory is correct, before I even had a chance to read the e-mail, another family member, who does not wish that he or she be identified, had already responded.

This person wrote my dad back that it sounded as if Thompson was auctioning his prize milk cow.

When this person hit “reply all,” he or she did not realize that Thompson himself was on the response list.

Thompson’s reply to my father was terse, and it was clear that I was no longer considered a viable candidate for his daughter’s hand.

So, my shot at an arranged marriage died before I even had a chance to respond for myself.

Not that I would have even considered an arranged marriage, of course. The last thing I wanted in a life partner was someone whose father still controlled her like that, and I really don’t find “quiet and submissive spirits” to be much of a turn on. I’m more into the “rapier wit” sort, which is why I am married to my highly intelligent and decidedly irreverent wife. (She has failed to detect any god-like qualities in me, and yet loves and desires me anyway.)

Speaking of the lovely Amanda, soon after we met, but before we were dating, my family told her the story. I told her that when I heard of the proposal, I thought of a certain song. I grabbed a guitar, and sang to my future wife the first song I would sing her. She told me later it won her heart.

It Ain’t Me Babe
(Written by Bob Dylan, but performed in my favorite version by the Turtles, who omit the third verse.)

Go ’way from my window
Leave at your own chosen speed
I’m not the one you want, babe
I’m not the one you need
You say you’re lookin’ for someone
Never weak but always strong
To protect you an’ defend you
Whether you are right or wrong
Someone to open each and every door
But it ain’t me, babe
No, no, no, it ain’t me, babe
It ain’t me you’re lookin’ for, babe

Go lightly from the ledge, babe
Go lightly on the ground
I’m not the one you want, babe
I will only let you down
You say you’re lookin’ for someone
Who will promise never to part
Someone to close his eyes for you
Someone to close his heart
Someone who will die for you an’ more
But it ain’t me, babe
No, no, no, it ain’t me, babe
It ain’t me you’re lookin’ for, babe

Go melt back into the night, babe
Everything inside is made of stone
There’s nothing in here moving
An’ anyway I’m not alone
You say you’re lookin' for someone
Who’ll pick you up each time you fall
To gather flowers constantly
An’ to come each time you call
A lover for your life an’ nothing more
But it ain’t me, babe
No, no, no, it ain’t me, babe
It ain’t me you’re lookin’ for, babe

I know, really romantic. But it worked. Amanda told me that she figured she would never marry, after her experience in Lindvall’s group. If marriage was just about housework, babies, goats, and serving men, she would far rather remain single. By playing her this song, I signaled to her that I did not view marriage as that rigid hierarchy with rigid roles. It took a while before I went ahead and asked her out, but that was, I believe, the point at which she allowed herself to hope.

I have never met John Thompson or any of his daughters. As a matter of fact, I couldn’t pick him out of a lineup. I later found out, though, that my future father-in-law had met him and his daughters at some homeschool conference. He suggested my response should have been, “but how does she look?” (This might be where my wife got her tongue…)

If you want to read more on Thompson’s views on marriage and “courtship,” here is a good place to start. You can follow the links to Thompson’s own writings. 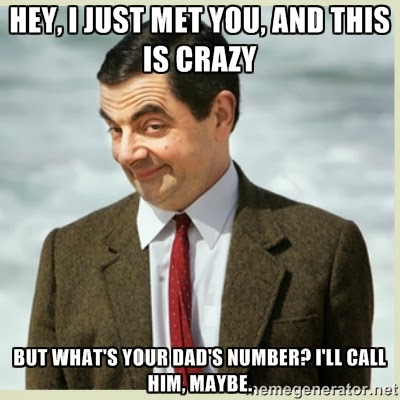 I must admit, I have been curious about what eventually happened to the Thompson girls and their father. Obviously, I never broke his daughter’s heart. I would assume he made the inquiry without telling her anything. Had my father agreed (snort! - it always would have been my choice - our family wasn’t like that), presumably she would have been told that a young man was interested, and she would have had one shot (without meeting me) to say yay or nay. After that, the courtship would have been for practical purposes unbreakable.

I did feel sorry for her, whichever daughter she was (I don’t remember - the oldest would make most sense based on the timing), being trapped in that family.

So, it came as no surprise at all to discover that there was a big blowup in the Thompson family a few years later.
(Some of this information I discovered by accident while researching my Patriarchy and White Supremacy post. The rest was filled in after That Mom re-posted my Doug Phillips article, by people who had stayed in that loop.)

The oldest daughter (the wife that got away?) apparently did marry someone approved by her dad through the “courtship” process. The next two daughters were not so compliant, both eloping against their parents’ wishes. I am completely unsurprised at this, of course. I would be more surprised to see entire families within the movement without at least one child who decided to cut ties with his or her parents and leave forever.

The middle child in this case became an atheist, and remains estranged from her family. Her professional website is here. She is quite talented, and it is good to see that her skills didn’t just get buried so she could serve an approved man. She also, apparently, does a show entitled “From Virgin to Vixen in One Night.”

(This title cracks me up! It encapsulates the whole “courtship” fantasy in seven words. The girl is to go from ZERO emotional entanglement - and limited knowledge of sex if any - before marriage, to the vixen of the man’s dreams, capable of preventing him from even thinking about other women - or she has failed. But no pressure…
There are clips of the show on youtube, and it is pretty witty. Fun use of show tunes.)

Here is the final twist of irony: when Thompson’s daughter rebelled eloped escaped, he himself became a pariah. See, one of the qualifications for leadership the Partriarchists take very seriously is that one’s adult children be “Believers.” Thompson was really close with Phillips before this, and they often lectured together. But afterward, not so much. In fact, Thompson was shunned by Phillips, and was essentially excommunicated from the Vision Forum fold. And lost his place in on the “A List” as a lecturer.

And now, um, Phillips finds himself in a bit of a sticky wicket. You know, not having children who escaped, but sexually abusing a young woman while continuing to lecture.

And yes, it appears that at the exact time that he was essentially ex-communicating Thompson, he was doing a young girl. If I were Thompson, I would be pissed.

Posted by Diary of an Autodidact at 11:22 AM