The Elegance of the Hedgehog by Muriel Barberry

Source of book: Borrowed from the Library
Date originally posted on Facebook: May 7, 2011

I am slowly reposting my old reviews on the blog. This book is responsible for the blog’s name. I recently received the author’s first book, Gourmet Rhapsody, which I hope to read later this year. 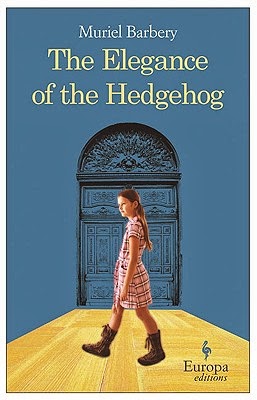 This novel, originally in French, is available in English translation by Alison Anderson.

It seems strange to recommend a novel with a bare-bones plot and an emphasis on philosophy and rigid class roles in France, but this book has a warm heart, well drawn characters, and a fascinating picture of the world it illustrates.

Two characters narrate the story: Renee Michel, the round and unattractive concierge of an upscale apartment building; and Paloma Josse, a precocious twelve-year-old.

Renee is a fine example of the adage that appearances can be deceiving. The true definition of an autodidact, she has trained herself in literature and philosophy while carefully maintaining the façade of a rather dull peasant.

Paloma likewise has concealed her intelligence for social reasons. She finds her family to be self centered and hypocritical and decides to end her life on her thirteenth birthday.

Into this situation comes a new person to upset the status quo – Kakuro Ozu, a wealthy Japanese business man, purchases the floor formerly belonging to a newly deceased tenant. He senses that Renee is not what she seems, and enlists Paloma to help confirm his suspicions. Renee is unable to keep her secret from either Ozu or Paloma for long, and her shell is gradually cracked.

As a plot, this is fairly thin – perhaps best described as a platonic love story. However, Barbery has a nice touch with the characters. While they are certainly types, they also seem real and sympathetic. The philosophy is also handled carefully, being neither overwhelming for a neophyte nor overly simplistic.
Why the philosophy? Barbery is first a philosophy professor, and only second a novelist. In France, apparently, philosophy is still a required course at the high school level, which probably led to the popularity of this book in France, where it sold over one million copies.

This book walks the not often fine line between serious fiction and popular fiction. It avoids the modern and postmodern literary fiction aim to alienate the popular reader as proof of worth, but also refuses to talk down to the reader. Barbery assumes a certain amount of knowledge, and lets her characters take the story from there.

Some particular passages stood out to me as thought provoking, smile inducing, or both. First, I should note that Barbery is clearly a cat person, not a dog person. As such, she and I instantly have a common perspective. For example, her description (by Renee) of poodles as totems: “As we all know, poodles are a type of curly haired dogs preferred by petit bourgeois retirees…Though all poodles bark snappily at the slightest provocation, they are particularly inclined to do so when nothing at all is happening.”
Conversely, Paloma’s description of cats as “mobile decorative objects” serves to show her character. Cats throughout are used as indicators of their owner’s true selves. Paloma’s mother’s cats are named Constitution and Parliament, and reflect their owner’s pretention to education without any true depth of thought. Renee is betrayed to Ozu when he correctly surmises that her cat is named Leo after Tolstoy. She in turn is shaken to discover that his cats are named Kitty and Levin.

Another humorous exchange occurs soon after Renee, Paloma, and Ozu discover each other. Ozu solicits the opinions of the others as to what the English have invented. Renee jokingly says they have invented Habeas Corpus and Lawns. Paloma contributes “ The hat, as a symbol of stubborn resistance to change.)
Paloma’s narration is in the form of a diary she writes as the story progresses, and she is concerned with what I believe is the novel’s theme: Can we escape our fate? Paloma initially believes that she cannot, which is why she despises life. Renee too, believes she cannot escape her fate, so she buries her inner life so that it will not cause her pain. Ozu, on the other hand, represents the idea that fate is not fixed, that each of us can choose to embrace love.

Ultimately, Renee (and I believe the author as well) concludes that the purpose of intelligence is to serve others, not to merely accumulate knowledge. In the words of Saint Paul, knowledge puffs up, but love builds up. As both central characters come to realize the importance of their relationships, the novel reaches its emotional climax.

Without revealing key plot points, Barbery is able to avoid the obvious resolution, make an interesting allusion to a favorite philosopher, and leave (in the best sort of way) a bittersweet taste.

Posted by Diary of an Autodidact at 3:25 PM