A Year Down Yonder by Richard Peck

Source of book: Audiobook from the library (but we also own it)

Richard Peck is one of our favorite authors, and we listen to his stories quite often on our trips. Here are the previous Peck selections: 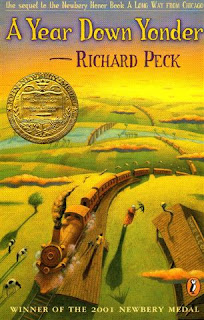 A Year Down Yonder is the sequel to A Long Way From Chicago. While the first was a Newbery Honor book, the second won the medal itself. In the first book, Joey and Mary Alice spend summers (7 in all) in a small Illinois town with Grandma Dowdel, a large and thoroughly eccentric woman. In the second book, Joey is all grown up, and working out west for the CCC during the Great Depression. Their father loses his job, and the best they can do on mom’s wages is a small apartment with no room for a child. Thus, Mary Alice is sent to stay with Grandma Dowdel for the year. She is now 15, and not particularly thrilled to be back in a hick town for the entire school year.

However, Grandma Dowdel, while not exactly warm and effusive, is willing to take her in, and assist her in her new life. Along the way, there are some of the usual adventures involving Grandma: giving bullies their comeuppance, mild theft, stirring up the neighborhood, and generally humorous happenings. There is also a tornado, a WPA artist (whose nude painting session goes badly awry…), and general poking fun of the snootiness of the DAR.

I do want to mention the halloween episode. I come from small town farming stock - my paternal grandparents grew up in eastern Montana and told some similar tales of their escapades. My grandfather told of the pranks they used to play on halloween, including tossing scarecrows in front of speeding cars at dusk. But, like the hooligan boys in this book, they also used to tip over outhouses. At least until the one year they tipped over his parents’ one - with his mother in it. Inga was renowned for her fierce temper, and there was apparently hell to pay. In the book, Grandma Dowdel lies in wait with a trip line and a pot of glue, with delightful (or horrible - depending on your point of view) results.

The tale of the DAR meeting is also grand humor. My ancestors (at least the ones we know of) all came to the United States far too late to qualify for the Daughters of the American Revolution, but my wife has some blue bloods in her background. (Also moonshiners, so it cancels out…) But anyway, the DAR takes itself pretty seriously, particularly in small towns where it can make a difference between the hoi polloi and the “best” kind of people. So, when a bad case of menopause leads to a desperate plea to Grandma Dowdel to provide tarts for the annual meeting, she does not miss the chance to impose her will on the gathering, insisting it be at her house, and inviting some non-members. Which then goes downhill as Grandma Dowdel expected when an ancient lady mentions that the banker’s wife was really a foundling from the least respectable family in town - and the sister of Effie Wilcox, Grandma’s gauchely hick frenemy.

In the end, of course, Mary Alice finds she has enjoyed her time with Grandma, and isn’t eager to leave. She must, but she carries two things with her: the discovery that she wishes to write, which leads to her career, and a promise to write from Royce McNabb, her future husband.

I recommend both of these books. You don’t have to read them in order, but I think it is best if you do. Peck has a wide range of stories, from the mouse tales we first discovered, to ghost stories, and from mid-elementary level (in my opinion) to young adult. He writes both male and female characters with subtlety and believability, which makes for a nice blend of protagonists for my kids, which are as evenly split as five can be. Peck’s settings also vary, from the Victorian Age to modern times, and his period details are always well researched and matched to the stories. If you haven’t discovered Peck, there is no bad place to start, but the Grandma Dowdel books are a fun experience.
Posted by Diary of an Autodidact at 2:25 PM