Peter and the Shadow Thieves by Dave Barry and Ridley Pearson

Source of book: Audiobook from the library.

This is the second in what has become a pretty long (and undoubtedly lucrative) series. I previously reviewed Peter and the Starcatchers here. I recommend reading the other review first, as I will not duplicate much.

As a basic matter, this series is a spinoff of prequels to Peter Pan, based largely on Barrie’s book, but also on the Disney movie, which is much better known. My eldest daughter loves these books, and she is the one who requested we listen to them. We have books one and three (from a library sale) but not this one. 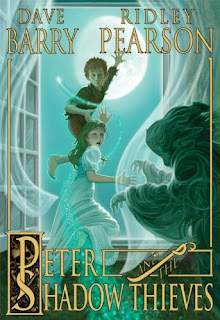 Peter and the Shadow Thieves continues the story from the first book, and reveals some of the mysteries. The “star stuff” that ended up on Mollusk Island (aka Neverland) has been sent back to England under the careful watch of senior starcatcher Leonard Aster, the father of Molly, who was a major character in the first book. It is to be held until the proper time for the “return,” where the stuff goes back to, I guess, where it came from.

However, things go awry. First Mate Slank returns to the island with a new captain (Nerezza) and a mysterious, non-human villain, Lord Ombra. (That this sounds like “Umbra” is not coincidental, although I wonder why the authors didn’t just go with the latter.) He is the “shadow thief” of the title, able to turn creatures into zombies and read their minds if he can just access their shadows. He is, naturally, after the star stuff himself.

After he learns that the star stuff went back to England, he leaves the island. Peter decides to hitch a ride (with Tinkerbell along to help) to warn the Asters, and attempt to prevent the capture of the star stuff before it can be returned.

That’s about as far as I will go with the plot, as this is a plot-driven series.

I had a few thoughts listening to this book in connection with how it compares to the first one. On the positive side, I felt that the action was less of the “set piece” nature than the first book. It read more like a, well, book, and less like an action movie. That’s an improvement. Particularly since it didn’t feel like the action scenes went on too long as it did in the first book. (I think the authors could have cut about half of the last big scene and the book would have been better.) Also good was the idea of Ombra. A nice horror/zombie trope, well executed. Also, Ombra makes a good villain for this sort of book. It isn’t intended to have particularly nuanced characters. There are good ones, and evil ones. And not a lot of gray. So Ombra works well, because he isn’t human, and can thus be unadulterated evil.

The setting of much of the book in England is also rather fun. Nothing against the island, but London is more familiar to me, shall we say, and it also has a better variety of characters.

Another thing I liked was that Tinkerbell becomes more of a major character, and one that does have some complexity. She is insanely jealous of other females, but usually does the right thing anyways. She is also resourceful and intelligent, and thus a strong female character.

On the other hand, though, Molly is a total disappointment in this book. It is hard to believe she is the same character. In the first one, she was a real match for Peter - even better than he, actually. She generally shows sound judgment, thinks clearly, and contributes to the good result at the end. Peter is the hero, of course, and must be because of the source material. But Molly was a good counterpart. In this book, however, Tink takes the role as competent female and Molly ends up making bad decision after bad decision. Despite Leonard’s claim at the end that she saved him, it is pretty clear she did her level best to mess everything up, leaving Peter to bail her out. It’s pretty clear why, too. In this book, she is too emotional and worried about her mother to actually use her brain. It would have been one thing if she had been written that way from the beginning, but she was such a good character in the first book that this was a real disappointment.

I will also note one odd thing about the plot. For much of the first half, there is a second parallel plot involving the Lost Boys back on the island. Then, in the second half, this plot just disappears, leaving things in suspense. While I am sure it will eventually be picked up in a later book, it was weird that it just disappeared, rather than being teased. (The Wikipedia article is inaccurate in this sense - at least about the audiobook. The book clearly ends before the actual return to the island.)

The audiobook was, like the first, narrated by Jim Dale, who does a fine job. These books are meant to be suspenseful, and that quality makes them a bit nerve wracking as driving books (although they ARE effective at keeping one awake and alert). Dale maintains the suspense while also dialing the tension back to a reasonable degree, the way an effective storyteller does. The words create the suspense, not the edge of the reader’s voice.

Posted by Diary of an Autodidact at 3:14 PM