The Evolution of Calpurnia Tate by Jacqueline Kelly

Source of book: Audiobook from the Library


This is another book in our not-particularly-methodical trek through the Newbery award books. This one missed out on the award, which went to When You Reach Me by Rebecca Stead, which we listened to earlier this year, but it did get an honorable mention. It could easily have won, in my opinion. (2010 was a good year. We also enjoyed Where the Mountain Meets the Moon by Grace Lin.) 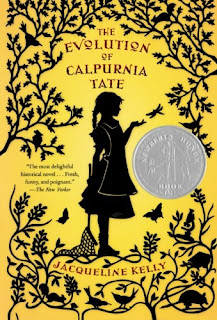 The book is historical fiction, set at the turn of the 20th Century, in post-Civil War Texas. Calpurnia is an 11 year old tomboy in an upper-middle class family. You know, the kind that has a cook and a housekeeper. But she definitely doesn’t fit in well. Her mother missed out on the debutante experience due to the war, and is determined that Calpurnia “come out” and eventually get married. But Calpurnia isn’t into that sort of thing at all, and finds the domestic arts to be dreadfully dull. It is hard to blame her, in some ways, though. After all, why learn to cook and sew when neither of her parents do? Learning those crafts just to show off for a beau - and to other females - when it is expected you will have the help do those tasks anyway just seems silly. (Calpurnia does eventually understand some of her privilege, to her credit, but she does assume a lot of things based on her life as she knows it.)


But that isn’t really where this book goes. Instead, Calpurnia has a burning desire to know things. In particular, she wants to know about nature and the world around her. As her parents are not particularly helpful, she attempts to request The Origin of Species from the library, only to be humiliated by a prudish librarian. She decides to be brave and approach her crusty and remote grandfather in his library. He is a Confederate veteran who moonlighted as a naturalist even while building a cotton gin business. Now retired, he spends his days collecting specimens and attempting to make whiskey from pecans. She knocks, he responds with “enter, if you must,” and thus begins an unexpected relationship. Calpurnia learns to collect and observe and record. And she gains a scientific education that her school will not provide.


Each chapter is headed by a quote from Darwin’s book, and Calpurnia’s journey is one from childhood to an adult world of scientific rigor, spiced with wonder and humor. The relationship between her and her grandfather is the true heart of the story, as is their quest to prove they have discovered a new species of vetch. Along the way, she has to navigate the changes that come with time. Her oldest brother (and best friend) falls in love, and Calpurnia makes some horrible missteps out of her jealousy. Three of her other brothers (there are six total…) fall in love with the same girl, and she tries to stay out of the middle of that mess. Progress is on the horizon, with the new motor cars and society is changing. Some people are not taking the shift well, while others, like Grandfather, embrace the long-awaited changes.


I liked that Calpurnia is a complicated character, never too sweet or too sure of herself. Coming of age is never easy, and her successes and failures seem realistic. Kelly also writes realistic supporting characters, although it is occasionally difficult to distinguish all of the brothers. (And really, Grandfather can’t tell them apart either...) But three definitely stand out. Harry, the oldest son, is Calpurnia’s confidant, and nearly grown up. Lamar is rude and entitled, and perhaps represents the old-style male. Travis is the sensitive animal lover. The others are more anonymous.


The book is more episodic than not, and Calpurnia’s problems never really resolve. After all, just turning 12 and flipping to the new century doesn’t change the basic dynamics of the family. However, it is easy to imagine that she will manage somehow to get into the university, and change the trajectory her parents have for her. After all, she has discovered knowledge, and there will be no turning back for her.


This book kept my kids’ attention well, with enough humorous bits for the younger kids, and themes that resonated well with my older daughters, who are themselves beginning to plan for their futures. More than 100 years later, their choices are definitely different. It is assumed that all my kids will go to college, and it is also assumed that they will have domestic skills - and yes that includes the boys. No servants for them, which is a good thing. But also, there is no black and white choice between domesticity and education, which really is one of the ways that our current century is better than the past.


I’ll also add that I appreciated that the science in this book passes two important tests. First, it is accurate, which is not always a given in children’s books. Second, it is matched to its setting. The state of science in the book is what it would have been at that time.


This book is considered “Young Adult,” probably because of an amusing underaged drinking incident and some oblique references to sex. (How do you discuss evolution without it?) Nothing I found objectionable, even for my youngest.


The audiobook was read by Natalie Ross. I particularly appreciated the fact that there were tracks roughly every minute, which made finding our place after stops much easier.

Posted by Diary of an Autodidact at 3:12 PM