This was this month’s selection for our “Literary Lush” book club. One of the things I enjoy about this club is that I end up reading interesting books that I never would have discovered on my own. This book certainly qualifies, as I had no idea it existed. 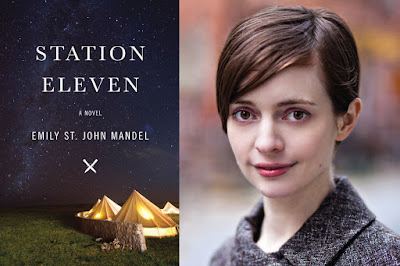 Published in 2014, this book feels a bit weird to read during a pandemic. After all, it is all about the aftermath of a truly devastating pandemic, which leaves the world largely depopulated, and civilization a mere memory.

The central “character” of the book is really a group of people - a traveling music and drama group that performs classical music and Shakespeare plays, traveling from town to town like a troupe in the Middle Ages. They are survivors, but more than survivors. As the slogan on their caravan says (quoting Star Trek Voyager), “Survival is insufficient.”

The book jumps around a lot in time, which seems to be almost a requirement for fiction these days. (I kind of miss the linear narrative, honestly…) The book begins and ends with the arrival of the pandemic to Toronto - which happens at the same time that a famous actor dies onstage while performing the part of King Lear. All of the main characters are somehow connected to both this event and to the actor, Arthur Leander. As the book proceeds, it flashes forward to the aftermath 20 years after the pandemic, and back 20-30 years to Arthur’s life, from his childhood on a remote island off the west coast of Canada (where the author grew up, by the way), through his decision to become an actor, his career, and his love life.

Two of Arthur’s ex-wives figure prominently. His first one, a woman who grew up on the same island, creates a graphic novel called Station Eleven, which inspires two of the later characters - Arthur’s son, who combines its post-apocalyptic theme with the book of Revelation, and becomes a cultic prophet - and Kirsten, an actor in the troupe, who was in the same Lear production as Arthur as a child. The other ex-wife is the mother of the Prophet, who becomes the primary nemesis in the book.

I’m not entirely sure what else to explain about the plot. Or plots, more accurately. There were a few things that I didn’t like particularly about the book, and both had to do with the plot. First, one of the characters feels grafted on to the rest. His subplot doesn’t interact with the main plot except for what feels like a contrived coincidence, and his later adventures have little to do with the rest of the book. His story isn’t bad, but it might have been better as its own book.

The second thing that bothered me was the way the pandemic was written. I am married to an ICU nurse who has served on the front lines of this pandemic, and who has had to deal with other dangerous microbes, from H1N1, to decisions about when and if to treat an incoming patient as potentially Ebola positive. So, we have had discussions about pandemics quite a lot.

The problem with the plot is that the pandemic is unrealistic. Not in the sense that a pandemic couldn’t wipe out most of humanity. It is more an issue of the specifics of this one. It is a flu that spreads quickly and with little exposure (plausible), but also one in which the timelines are not consistent with worldwide spread. Basically, from exposure to symptoms is about 6 hours, and from symptoms to incapacitation only a few hours more, and from symptoms to death a mere 24 hours. This is not that conducive to rapid spread. The asymptomatic period of contagion is probably three hours, at best. And from first possible contagion to incapacitation is maybe nine hours, most of which are symptomatic? The problem with this is that most people would die before they can contaminate more than a few people. Say I catch it on the way home at the store. By midnight, I am sick, and maybe I call an ambulance. This is a problem for healthcare workers, clearly, but I probably haven’t gotten anyone else sick outside my family. And, once the word gets out and people know it is deadly, everyone stays home for 24 hours, and the disease dies out. In order to have a truly deadly pandemic, you really need some sort of of a vector that is either uncontrollable or unaware. So, in the case of Covid, the ability to spread the disease with zero or mild symptoms is crucial. Or, in the case of the Black Death, the vector - fleas - were not harmed by the disease, and could thus spread it with impunity.

Okay, so that’s what I didn’t like. There was a lot to like, however. The writing is quite good, and many of the ideas are fascinating and plausible. The orchestra and acting troupe gets so many details right, I wonder if the author plays an instrument. For example, she realizes that certain items on instruments wear out and need replacement - rosin for example. While she doesn’t name them all (strings and reeds come to mind), she gives enough detail so that we can assume the rest. (No need for a comprehensive list in a novel, just an acknowledgement of the issue.) The petty jealousies that exist in any arts production are handled well, including the fact that artists will overlook their feelings in order to keep a group together.

I also loved the scenes of the characters searching abandoned houses for useful items, from clothes to cooking utensils. In a collapsed civilization, these products of industry would gain greater value.

The accounts of some of the ways that humans created small political units seemed pretty realistic, although twenty years out, I would have expected significantly more trade and political organization. Since humans in North America largely share a common language (or languages as you get further south), the usual reason for inability to organize wouldn’t exist. Heck, the indigenous peoples of North America lacked a common language, yet still created a trade and communication network that spanned the entire Western Hemisphere. I would have figured twenty years would have meant quite a developed rebuild. It’s a minor quibble, though.

The rise of violent religious cults was pretty realistic too. I’m pretty familiar with the Bible, having read it multiple times, and there is plenty in there that could be taken in a dangerous manner, particularly by a child who has just gone through horrific trauma. Likewise for a comic book. That’s one of the problems with taking a text and making it the end-all of one’s explanation for events. Add in trauma, a need to explain why horrific things happened, to find meaning in a meaningless event - and to gain a sense of control in a chaotic universe - and the step to insane and violent religion is a very short one. In fact, I believe that the need for certainty, for control, for a pretty explanation for a messy reality, is what drove people like my parents into a cult. And what drives people to Q Anon, and Trumpism, and so on. And along with this comes a need to label other humans outside your cult as evil enemies. There is a great line in the book about this:

“They call themselves the light.”

“If you are the light,” she said, “then your enemies are darkness, right?”

Mandel is Canadian - we have read a number of Canadian authors with our club - and there are a number of very Canadian elements to the book, if you know what to look for. Both Canadian and universal is the fact that few outside a place really understand it. In the book, Arthur (I believe) complains that people outside Canada assume he grew up near Maine. Which is on the other side of the whole freaking continent. (Polly Horvath, another Canadian, makes a similar observation in one of her “Mr. and Mrs. Bunny” books.) Here in California, we get that all the time too. People assume that we live near Hollywood, or that we could just pop on up to San Francisco for the afternoon, or that you can see Yosemite and Santa Monica Beach in the same day.

I hope I have done this book reasonable justice. It was a fun read, and the flaws didn’t detract from the enjoyment of the story. Our club liked it, and found it oddly comforting in the midst of our own, far milder pandemic. I myself heartily agree with the central premise, which is that even in our darkest days, humans long for the arts, for that slice of transcendence and universality and connection. And yes, I expect Shakespeare and Beethoven would remain timeless as they do today. On a related note, in our discussion of what we would bring if we had to leave our homes suddenly, for those of us who are musicians, the order was “(1) children (2) Pets (3) instrument.” And maybe not in that order…

Just for fun, here is the list of books that our book club has read. At least the ones I have read too. Most of these were read for the club, but a few were ones I read previously - those posts pre-date the club discussion - and some I read afterward, because I missed the discussion. A few of the books were “optional” second books for a given month.

The Man In The High Castle by Philip K. Dick

Parable of the Sower by Octavia Butler

The Night Watchman by Louise Erdrich

Forest of a Thousand Lanterns by Julie Dao

Daisy Jones and the Six by Taylor Jenkins Reid

The Air You Breathe by Frances de Pontes Peebles

The Penelopiad by Margaret Atwood

The Haunting of Hill House by Shirley Jackson

There There by Tommy Orange

Be Frank With Me by Julia Claiborne Johnson

The Song of Achilles by Madeline Miller

A Gentleman in Moscow by Amor Towles

Ready Player One by Ernest Cline

All the Birds in the Sky by Charlie Jane Anders

The Goldfinch by Donna Tartt

The Island of Doctor Moreau by H. G. Wells

The Master and Margarita by Mikhail Bulgakov

The Radium Girls by Kate Moore

Posted by Diary of an Autodidact at 1:48 PM