Source of book: I own the complete poems of Anna Akhmatova

I had been intending to read Anna Akhmatova ever since I read Clive James’ essay on her - one of many brilliant essays in Cultural Amnesia. I saved my “mad money” aka credit card rewards, and found a nominally used copy of the complete poems, translated by Judith Hemschemeyer, for my collection. As with many “used” books I buy, they are barely used, if they have even been cracked open - I’m not sure this book has been read. Yet. Included in the book are a number of biographical essays and other material, making for quite a large - and comprehensive book.

As with most of my poetry collection, I decided to start at the beginning, in order to see the progression of Akhmatova’s writing from her early years to her later. In this case, that meant starting with her 1912 collection, Evening, published when she was all of 23 years old. Already, she is showing her talent and depth of thought. These are not mere juvenilia, but works of a brilliant young poet.

One of the things that is striking about these poems is how innocent and uncomplicated the world was, compared to what it would become for Akhmatova. Her first husband and the father of her son would be executed by the Soviet secret police, her son would spend time in the Gulags, and her later partner would die there. And these were just a few of the many people she was close with that would suffer under Stalin’s purges. Her works would be suppressed by the Stalin regime, and she would spend most of her later years under constant threat of arrest. By 1946, Party Secretary Andrey Zhdanov would eviscerate her poetry, in a statement that carried more than the threat of censorship.

“What positive contribution can Akhmatova’s work make to our young people? It can do nothing but harm. It can only sow despondency, spiritual depression, pessimism, and the desire to walk away from the urgent questions of public life, to leave the wide paths of public life and activity for the narrow little world of personal experience. How can we place the education of young people in her hands?”

It is quotes like this that illustrate just how alike all fundamentalist belief systems are - the same stuff was pushed within Christian Fundamentalism, and as above, within Soviet Communism. 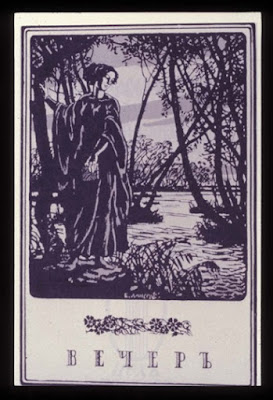 The original frontispiece to the first edition, by Evgeny Lansere

But when Evening was written, her biggest source of friction was her love life, and even then, she was married with a newborn - life was indeed relatively simple.

Despite this simplicity, the poems are far from naive (Akhmatova was wrong about that.) For the most part, they speak of the complexity of love and loss and disillusionment. There are some striking metaphors in many of them, and unexpected twists and emotional shifts. I thoroughly enjoyed them, and look forward to the rest of the book.

Here are the ones I decided to quote for this post. I’ll start with this one, which opens the collection, and is a favorite of mine already.

Now, like a little snake, it curls into a ball,

Then for days it will coo like a dove

On the little white windowsill.

Or it will flash as bright frost

But surely and stealthily it will lead you away

From joy and from tranquility.

It knows how to sob so sweetly

In the prayer of a yearning violin,

And how fearful to divine it

In a still unfamiliar smile.

That picture of love as a little snake is unexpected and thrilling. Like many of the poems, this one has a bit of a bitter edge. And so does this one:

Under her dark veil she wrung her hands…

“Why are you so pale today?”

“Because I made him drink of stinging grief

Until he got drunk on it.

How can I forget? He staggered out,

His mouth twisted in agony…

I ran down not touching the bannister

And caught up with him at the gate.

He smiled calmly and grimly

That’s a perfect poetic vignette, where the reader has to fill in the gaps. Here is another memorable opening image.

As if with a straw you drink my soul.

I know, it’s a heady and bitter taste.

But I won’t infringe on the torture with pleas,

Oh, I’ve been at peace for weeks and weeks.

Let me know when you’re done. It’s not sad

That my soul is no longer of this world.

I’ll just walk down that nearby road

To see how the children play.

The gooseberry bushes are blooming,

And they’re hauling brooks beyond the fence.

Who are you: my brother or a lover,

I don’t remember, and I don’t need to remember.

How bright it is here and how unsheltered,

And passers-by are thinking vaguely:

That first line is just outstanding. And that twist in the final line…How about another one with a twist at the end?

He loved three things in life:

And old maps of America.

He hated it when children cried,

He hated tea with raspberry jam

This next one is another one of tortured and failing love. I have often thought that in order to gain membership in the “Great Russian Writers Hall of Fame,” you have to have a love life best described as “complicated.” That was the case for Akhmatova, who never seemed to find what she was looking for, and the flawed men she loved didn’t help with that. We got some great poems out of it, though.

They didn’t bring me a letter today:

He forgot to write, or he went away;

Boats are rocking in the bay.

They didn’t bring me a letter today…

He was still with me just recently,

So much in love, affectionate and mine,

But that was white wintertime.

Now it is spring, and spring’s sadness is poisonous.

He was still with me just recently...

I listen: the light, trembling bow of a violin,

How terrible that my heart will break

Before these tender lines are complete…

I am not sure I ever saw a poem that talked of love fading when winter turned to spring - that seems somehow rather Russian. Many of the great romances seem to have bloomed in winter.

This next poem was written as a tribute to Annensky, one of the Russian Symbolists. I haven’t read any of his poems, so I have nothing to compare it to. But I rather liked it.

“Imitation of I. F. Annensky”

And to you, my first fancy,

I said farewell. The east was turning blue.

You said simply, “I won’t forget.”

And right then I didn’t believe you.

Faces appear, are washed away,

Dear today and tomorrow far off.

Why did I once turn down

The corner of this page?

To the same place. And then it’s strange:

It’s as if from the moment of farewell,

The years have not passed beyond recall.

Oh, whoever said that the heart is of stone,

Certainly knew: it is made of fire…

I’ll never understand, were you close to me

Or did you only love me?

I’ll end with one more that is unforgettable - and I believe one of the earliest poems in the collection, written before Akhmatova turned 20.

And when we had cursed each other,

How small the earth can be for two people,

And that memory can torment savagely.

The anguish of the strong - a wasting disease!

And in the endless night the heart learns

To ask: Oh, where is my departed lover?

And when, through waves of incense,

The choir thunders, exulting and threatening,

Stare sternly and stubbornly into the soul.

I have looked up a few of these poems to see other translations, and I think Hemschemeyer does an outstanding job. Translation is an art, not a science, and there are not exactly right and wrong ways to do it. But there are better ways, and Hemschemeyer’s translations are luminous and flowing. I am glad I got this particular version for that reason. This book is an excellent addition to my growing poetry collection.

Posted by Diary of an Autodidact at 12:57 PM