The Good Husband of Zebra Drive by Alexander McCall Smith

Alexander McCall Smith has been a favorite of ours for years, ever since the kids heard a part of the first Mma. Ramotswe book that my wife was listening to years ago. They remain in our regular travel audiobook rotation, as the slowly unfolding and psychologically complex stories help the miles go by, being neither too exciting (and thus distracting) nor too dense (and thus sleep inducing.) And also, an excellent education in practical ethics.

This book is the eighth in the series, and, with the exception of the first book (which I need to go back and read, since the kids already have read it), we are back to listening to them in order, finally. 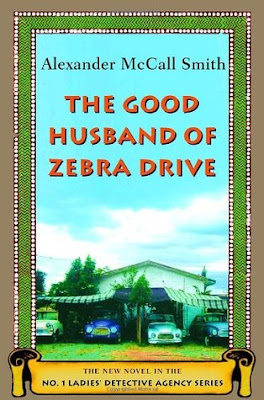 The Good Husband of Zebra Drive has a few things in common with book six, In the Company of Cheerful Ladies, which we listened to last year. I had to think back a bit to book seven, Blue Shoes and Happiness for the gap in the narrative since the last one we listened to, but it wasn’t too difficult. In the Company of Cheerful Ladies introduced two important characters, Phuti Radiphuti, the wealthy, stuttering, and awkward - but thoroughly decent - man that Mma. Makutsi is engaged to is one. The other is Mr. Polopetsi, general do-it-all for both the detective agency and Tlokweng Road Speedy Motors.

As usual, there are several interlocking plots, some involving cases that the agency is investigating, and some internal drama among the characters. The theme that seems to drive this book is the question of contentment and ambition. Is it better to stay in a good situation, or try to set out on one’s own? Is it better to do what one is good at? Or try to find something one might like better? And, on a very related note, how does change affect everyone’s feelings of security and appreciation?

First, the official cases. The hospital in Mochudi (where Mma. Ramotswe grew up) consults the agency regarding a trio of deaths that might be just coincidence...but probably aren’t. Since the hospital treats a lot of AIDS patients, and is chronically underfunded, a major scandal could result in its total failure. Next, with the ladies out on other matters, Mr. J.L.B. Matekoni does the intake on a case brought by a wealthy woman concerned that her husband is cheating on her. Mr. J.L.B. Matekoni is a bit bored with his mechanical work, and asks to try his hand at this case. He’s actually pretty good, and finds out some very interesting information. And a photograph that leads him to doubt whether Mma. Ramotswe is being faithful to him. Finally, the owner of a printshop (who appears to dislike her job) believes an employee is stealing, but can’t find proof.

Then, there are the internal issues. Charlie buys a car and leaves to open a taxi service. (This ends exactly as well as you would suspect…) Mma. Makutsi quits and looks for another job. Mr. J.L.B. Matekoni turns detective. And Mma. Ramotswe’s world is turned upside down.

Can she solve the cases? Will things ever go back to the way they should be again? Is the world merely a bundle of unresolved unhappiness? Will common sense, good will, and copious quantities of bush tea be enough to win the day? Well, we know the answer to that last one, at least.

There are some rather interesting moral dilemmas in this one, as well. One of the most fascinating actually corresponds with the story of Mr. Polopetsi from book six. In that book, we find out that Mr. Polopetsi worked as a pharmacy assistant, but was unjustly blamed for a medication error by someone higher up - and did prison time for it. In this book, in contrast, a very low-level employee unwittingly is responsible for deaths. The temptation would be to throw the blame on that employee - who desperately needs the job - in order to make the organization look better. The question isn’t as easy in a situation where a win-win solution is hard to find.

Another recurring question in the book is that of how to show grace. And, as usual, two men demonstrate strength in kindness. Phuti Radiphuti turns an awkward situation with Mma. Makutsi into a masterful defusing of fears and anxieties. He manages to show his appreciation for Mma. Ramotswe and communicate to his fiancee that she is valuable to both of them. Mr. J.L.B. Matekoni, one of the truly great men in literature, shows a bit of backbone when disrespected by a client, forgiveness to Charlie, and good humor when his fears about Mma. Ramotswe turn out to be based on a mistake. He also shows that he has learned from his previous bout with depression, and does his best to avoid the sorts of mental patterns that gave him problems in the past. I love his character because he is such a gentle, almost timid man, but so very decent at his core - he demonstrates that masculinity and strength are not about aggression or power, but about kindness and character. (Phuti Radiphuti has a lot of the same traits - although expressed in a different personality.)

As for the question of contentment? Well, some characters return, as we knew they should. But there is also a sense of resignation. Life isn’t always the way we dreamed it. Mma. Makutsi will never be a glamorous secretary because she doesn’t look the part. But she is loved and respected by those closest to her, including her fiance. There is a scene near the end, when Mma. Ramotswe and Mma. Makutsi talk about whether they are content. And Mma. Ramotswe is right. She has a devoted husband, two adopted children, an interesting if not particularly lucrative job, and the friendship of good people. And really, who can ask for more than that? Okay, so maybe another pot of bush tea would be nice…

The Tears of the Giraffe (#2 in the series)

The Kalahari Typing School For Men (#4)

The Full Cupboard of Life (#5)

In the Company of Cheerful Ladies (#6)

Posted by Diary of an Autodidact at 3:52 PM