I actually checked this book out for kid #4, who is currently on a binge of all things seafaring. He got hooked reading my Patrick O’Brian books, then moved on to my Time Life books on the Age of Sail, Two Years Before the Mast, the Mutiny on the Bounty trilogy, and last week finishing Moby Dick. He’s age 12. Oh, and he’s been using legos to build the various two-masted ships and boats. If he gets a few more pieces, he should be able to build a frigate. He’s an interesting kid, to be sure. So, I figured that since he already loves Simon Winchester, one about the Atlantic Ocean would be a good read. And, since I had it out from the library already, I read it myself.

I too have enjoyed the Simon Winchester books I have read. I have previously blogged about The Professor and the Madman and The Map That Changed the World.

Atlantic is in many ways typical Winchester. It is from a (mostly) British perspective, with a delightfully understated style. Winchester thoroughly researches all of his books, and fills in a wonderful amount of detail, without ever making his tales dry or boring. I thoroughly enjoyed this one as well.

One area in which this book is different, however, is in its scope. In fact, because of that scope, this book felt a bit like one written by another Simon, Simon Garfield. That is because, as one might imagine, the Atlantic Ocean is a big place, and its history is measured more in geological than human time scales. In order to, I suppose, “tame” this potentially vast topic, Winchester chooses a fun framing device: Jaques’ speech from As You Like It.

JAQUES: All the world's a stage,

And all the men and women merely players;

They have their exits and their entrances,

And one man in his time plays many parts,

His acts being seven ages. At first, the infant,

Mewling and puking in the nurse's arms.

Then the whining schoolboy, with his satchel

Unwillingly to school. And then the lover,

Made to his mistress' eyebrow. Then a soldier,

Full of strange oaths and bearded like the pard,

Jealous in honor, sudden and quick in quarrel,

Even in the cannon's mouth. And then the justice,

In fair round belly with good capon lined,

With eyes severe and beard of formal cut,

And so he plays his part. The sixth age shifts

Into the lean and slippered pantaloon,

With spectacles on nose and pouch on side;

His youthful hose, well saved, a world too wide

For his shrunk shank, and his big manly voice,

And whistles in his sound. Last scene of all,

That ends this strange eventful history,

Is second childishness and mere oblivion,

Winchester takes these “seven ages” and applies them to the history of human interaction with the Atlantic Ocean, from the very first explorations by the Vikings to our present age of exploitation of our oceans. He also includes a prologue and epilogue to explain the geological history of the ocean, and it’s probable future, long after humans have ceased to exist in their present form, hundreds of millions of years in the future.

I would never have thought of that particular framing, but Winchester makes it work. In addition, he travels to a number of fascinating places to research the stories he tells. I am not going to even attempt to recount the substance of this book. There is a lot - the book is 460 pages long, although they go by all too fast - and Winchester is a better storyteller than I am anyway. Just get the book and enjoy.

There are a few things I thought I might mention, though. First is an often overlooked fact: the theory of plate tectonics - the fact that the continents are moving around the earth - is a lot younger than people my age realize. As in, 1965, a mere 11 years before I was born. Simply put, humans did not have the ability to measure the movements of the tectonic plates, and had no idea of the true nature of the Mid-Atlantic Ridge - where two plates are moving apart and the gap filled by new rock. Now, with better technology, including satellites, no respectable geologist disputes the truth of plate tectonics. But it is still a very young understanding of our world, younger than my parents.

Because of the broad scope of Winchester’s writing, there are subchapters on all kinds of stuff. For example, he writes about the changing artistic portrayals of the ocean, culminating in the phenomenal works of Winslow Homer and J. M. W. Turner. (I very much agree that those two portrayed the Atlantic in arguably the most memorable ways ever. I’ve seen a number of their works in person over the years.) It is always fun to see a new name, however. Winchester mentions a Latvian-American artist, Vija Celmins, who I had never heard of. But take a look: these are not photographs - these are pencil drawings. 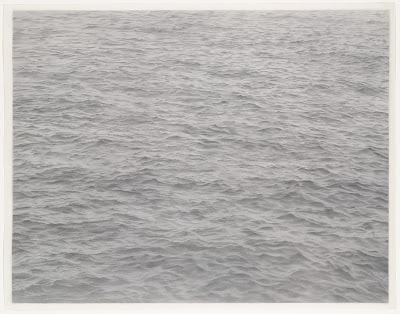 Another fun historical bit about the foundation of democracy. Specifically, parliamentary democracy, where appointed (elected) representatives get together and make laws. The earliest known instance of this appeared in Iceland in 930 CE. It then spread rapidly around the north Atlantic. On the Isle of Man, the first appearance was in 970 CE, and it has met every year since - making it the oldest continuously meeting parliamentary body still in existence.

Winchester opens the book with a description of his first Atlantic crossing as a teen - he did it on one of the last ocean liners. In fact, he had to fly back, because ship service ended during his visit. While Winchester clearly misses boats as a form of passenger service, he writes so well about flight. I just had to quote this passage:

At the international operations center of British Airways, which takes up the entire third floor of a highly secure and discreetly marked building on an empty moor some five miles west of London’s Heathrow Airport, the staff takes care to refer to every transoceanic flight as a “mission.” They do so in part out of tradition; but they do so also as a reminder that, just as with today’s explorations of space and with nineteenth-century ventures into godless interiors, there is never anything inherently routine or safe about their allotted task: in this case the lifting against the natural force of gravity of two-hundred-odd tons of airplane and three-hundred-odd human beings to an entirely unsustainable altitude of seven or so miles, and then propelling all without interruption for many long hours, suspended by nothing more than a lately realized principle of physics, high above a cold and highly dangerous expanse of ocean.

I just love that. Particularly “suspended by nothing more than a lately realized principle of physics.” (On a related note, I highly recommend Skyfaring by Mark Vanhoenacker as one of the finest and most poetic things ever written on flight.)

One more thing occurs in light of current events. Modern container ships, as Winchester notes, are both giant, and really ugly. And, apparently, current infrastructure gives little margin for error when you are carrying 18,000 containers. Also, giant ships, while much more efficient than other forms of transport, still leave lines of pollution which are visible from space. Yeesh.

Speaking of man-made issues, the most harrowing section of the book for me was the one on the collapse of the Newfoundland Banks fishery. Reading Captains Courageous is an interesting experience in light of that fact. It is also sobering when it comes to our current environmental degradation. Scientists warned about the risk to the fishery, government did way too little, too late. And Mother Nature didn’t give a fuck about the politics or the denialists. That’s how science works. But these days, an entire political party is based on a denial of reality. Winchester isn’t particularly political in his books, including this one. But because reality itself is not a political issue, the books end up being, in a way, political. There is no non-political way to talk about environmental degradation, after all. Because one side is fully in favor of extracting as much economic value out now, before things collapse completely, rather than accepting limits to profits now, so that the resources will exist for generations to come. That’s not just a political difference, it is a moral difference.

My son and I both greatly enjoyed this book, and talking about it after we had each read it. I continue to recommend Simon Winchester as a great non-fiction writer, about any and all topics.

Posted by Diary of an Autodidact at 1:55 PM