Part 4: The Theofascist Narrative, aka, The Culture Wars™

Part 1: Everybody Does It - Politics and Philosophy

Earlier this year, I wrote a post about Trumpism, and why it is classic Fascism. In that post, I gave a summary of what I call the “Fascist Narrative.” This is the story that Fascists tell themselves to justify actions of violence and oppression against those they hate. (The violence and oppression come first - but people prefer to feel good about themselves, and thus create narratives that allow them to feel that orgasmic self-righteousness as they indulge their hate and selfishness.) Here it is:

Once upon a time, there was a great nation. That great nation was strong, and powerful, and healthy, and full of goodness. Men were manly, women were feminine and knew their place in the home, and racial and religious minorities knew their place on the margins of society.

As a result, the nation lost its greatness.

Theofascism too has a narrative, and it is strikingly similar to the one for garden-variety fascism.

Once upon a time, there was a great nation. That great nation was strong, and powerful, and healthy, and full of goodness. Men were manly, women were feminine and knew their place in the home, and racial and religious minorities knew their place on the margins of society. The nation was great because its people made God happy, and he blessed them.

As a result, the nation lost its greatness.

See, I didn’t have to make many changes.

That is literally the narrative of the Culture Wars™

As I pointed out above, the narrative was created afterward. It did not come first. In the case of the Culture Wars™, the reason they exist is because the Religious Right - and all that grew from that - was founded in order to preserve racial segregation. We should never, ever, ever forget that. Along with the racial segregation came opposition to feminism and the Equal Rights Amendment, which should not even have been controversial, but somehow became so. (For the simple reason that a shocking number of people still are opposed to the political, social, and economic equality of women.)

My point in writing this particular post is to point out the obvious: whenever you hear the theofascist narrative, you should understand that you will also be seeing theofascist policies and the use (or at least attempted use) of political and social power to harm others.

The power of the narrative is great.

It has been said that sex sells. And it does. But FEAR sells far better than sex. (Fear of sex may sell best of all…) And it is very much FEAR that theofascists are selling, just like regular fascists. Fear of the other. Fear of cultural change. And, in the case of theofascism, fear that God will smite anyone who doesn’t join the theofascist movement. I have discussed this before, but it bears repeating: the hatred against LGBTQ people is fanned by the teaching that if the good “christian” people of the world do not actively persecute LGBTQ people, God is going to destroy them - and maybe even send them to hell. This may be even more powerful than the Nazi claim that Jews were going to destroy Germany. I mean, not just national destruction, but maybe hell too?

Unsurprisingly, given the common narrative, there is a LOT of overlap between theofascists and racist fascists here in the US. The attempted coup back in January brought together the Proud Boys (who prayed for success before they stormed the Capitol - it’s literally on video), people wearing Camp Auschwitz gear, and thousands of white Evangelicals convinced (and still convinced!) that the election was stolen from Trump. This is why the core of Trumpism is Evangelicalism - the theofascist Cultural Warrior subculture, terrified that God will hate them if they let the “liberals” win. This is also why white Evangelicals, more than any other group, are viciously anti-immigrant, anti-refugee, and anti-voting rights. The narratives overlap, and they do so intentionally.

And that brings us back to the beginning. The narrative exists to justify the violence and oppression. White conservative christians have enjoyed significant cultural and political dominance for a long time, but that dominance is crumbling as whites become a smaller percentage of the population, and as younger people, disgusted by the organized church, continue to flee. The only way to maintain dominance, if you lose the numbers game, is to engage in increasing violence and oppression of others - maintaining power by force against others. At some level, our consciences know that is wrong. So we invent the narrative to justify our evil behavior.

As I will show in the next post, theofascism is currently being expressed in a number of specific actions taken against vulnerable groups - all justified in the name of God. 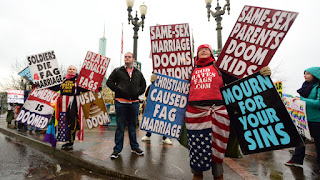 For God hath not given us the spirit of fear; but of power, and of love, and of a sound mind. (II Timothy 1:7)

You want to know how to recognize that a movement is not from God, but from...the opposite side?

It is selling fear.

Without this constant stoking of fear, the Culture Wars™ would not exist.

Instead, if we operated out of love, out of a place of security in our own beliefs, and out of rationality, we would be able to listen to those outside the tribe, and find our commonalities. That would be an actually Christian way to approach cultural - and demographic - change.

One more thought on why theofascism has arisen:

Conservative Christians have given up on making converts.

But it has been a LONG time since conservative Christians have been able to convert much of anyone. And they know it. It’s not hard to understand why, of course. Why would anyone want to buy what they are selling? It’s shit. It’s based on lies and hate and whiteness and misogyny. It is social darwinist economic policy, xenophobia, denial of science and reality. As others have noted:

They have no light to shed on reality, because they don’t believe in it. They have rotten, festering fruit that nobody wants to eat. And they have no love - only fear and hate.

So, having failed to make converts, they shifted during my childhood to “if you can make converts, make more babies,” and then sheltered us from reality, used various control techniques to make it hard to leave, and retreated into insular communities. And, predictably, that hasn’t worked either, as many of us left and are fighting back against what was done to us.

So what’s left? Theofascism. Use the power of government violence to harm those who disagree.

Posted by Diary of an Autodidact at 9:20 AM