Have His Carcase by Dorothy Sayers

I have loved Dorothy Sayers for a long time. I discovered some of her short stories as a teen, then read my first Lord Peter Wimsey mystery during a law school conference. (A classmate brought Murder Must Advertise.) More recently, I reviewed Are Women Human? which is excellent. Sayers herself was a fascinating character, with legitimate feminist credentials. There is more about her in my previous review, so I won’t repeat it here.

I hadn’t read one of her mysteries in a while, though, for a simple reason: we didn’t own the next in the series. That changed this Christmas, when Amanda found me a near-mint hardback at a library sale.

Have His Carcase is the second novel featuring Harriet Vane, a writer of detective novels who is in some ways an stand-in for Sayers herself. Lord Peter and Harriet first meet each other when she is on trial for the murder of her ex-lover. He is able to solve the mystery and bring the real murderer to justice. Lord Peter also becomes thoroughly smitten with Harriet. She does not return his affection, however, although she admires and likes him. Throughout this book as well, Lord Peter pursues Harriet, often ending a discussion of their mutual investigation with a marriage proposal.

One of the most delightful elements of this book is the banter between Lord Peter and Harriet. Witty in the extreme, they have a bit of the Beatrice and Benedick vibe, although Peter is more of a fop than a rake. The two of them investigate the mystery together, as equals in many respects, and each uncovers key facts and important conclusions.

As is my practice with mysteries, I will not spoil the plot. Like all of Sayers’ fiction, the plots are carefully laid. In the true British tradition, every fact is important, to either lead or mislead, and all are calculated to fit into the overall crime perfectly.

Harriet Vane is taking a walking tour of the coast when she stumbles across a recently dead body. Because she cannot move it, she takes pictures, and attempts to find the authorities before the tide takes the body. Because she is unsuccessful, the body is missing for weeks, preventing an inquest and requiring Harriet to stay in the area. Lord Peter comes to help her investigate, because the official conclusion of suicide seems too convenient, given the motives others would have to murder the victim.

Along the way, a straight razor, a cypher, Ruritanian literature, and a couple of classic cars all become important clues. 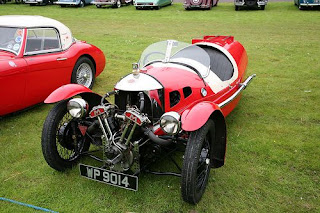 A 1933 Morgan 3-wheeler, which plays a key role in this mystery.

I do have to mention a couple of great lines. The first is at the inquest, in the statement by the coroner, in his argument that the death was due to suicide. The victim was of Russian descent - although he came to England as a small child.

He then summed up the evidence. He did not attempt to disguise his own opinion, which was that deceased had taken his own life...As to why he should have done so, it was not the jury’s business to speculate. Various motives had been suggested, and the jury must bear in mind that deceased was a Russian by birth, and therefore excitable, and liable to be overcome by feelings of melancholy and despair. He himself had read a great deal of Russian literature and could assure the jury that suicide was of frequent occurrence among the members of that unhappy nation. We who enjoyed the blessings of being British might find that difficult to understand, but the jury could take it from him that it was so.

There are plenty of humorous moments like this, but also ones where more serious and contemporary concerns come through.

The deceased was a professional dancer at a resort, paid to cozy up to the rich old ladies. Likewise, there were female dancers for the corresponding rich old men. All to draw the guests and their money. (Not a bad analogue to Las Vegas, I suppose…) Harriet spends some time observing the dancers - and the game.

She looked about the room. Long skirts and costumes of the ‘seventies [1870s] were in evidence - and even ostrich feathers and fans. Even the coyness had its imitators. But it was so obviously an imitation. The slender-seeming waists were made so, not by savage tight-lacing, but by sheer expensive dressmaking. Tomorrow, on the tennis-court, the short, loose, tunic-frock would reveal them as the waists of muscular young women of the day, despising all bonds. And the sidelong glances, the downcast eyes, the mock-modesty - masks, only. If this was the “return to womanliness” hailed by the fashion-correspondents, it was to a quite different kind of womanliness - set on a basis of economic independence. Were men really stupid enough to believe that the good old days of submissive womanhood could be brought back by milliners’ fashions? “Hardly,” thought Harriet, “when they know perfectly well that one has only to remove the train and the bustle, and get into a short skirt and walk off, with a job to do and money in one’s pocket. Oh, well, it’s a game, and presumably they all know the rules.”

Sayers herself was fond of trousers, for reasons of comfort and practicality, so she had a bit of a bone to pick with this game on multiple levels. I too have a bit too much experience with both the worship of the fashions of the past and with the goal of a “return to womanliness” which means submissive womanhood. Ultimately, as Sayers points out, and as the architects of the Republic of Gilead realized, once women have jobs, money, and freedom, it can’t ever go back to the old ways without a violent destruction of society and a trampling on human rights.

One reason I believe that detective fiction has remained popular is the rise of the female detective. Sherlock Holmes may have started it, but it was the Miss Marples that have sustained sales. If we have discovered anything over the last 200 years, it is that women, when given the chance (and even sometimes when not), can think every bit as well as men. It is natural, then, that there would be an attraction in a story wherein the sleuth is able to outwit the more established (and near-universally male) official detectives.

Anyway, Sayers is a pleasure, a definite notch above the average when it comes to detective fiction.

Posted by Diary of an Autodidact at 10:02 PM