In the past 13 or so months since that 300th post, a tremendous number of things have happened in the world. In particular, I would say that both Evangelicalism and the Republican party have had a really rough year.

The former record holding post for hits on my blog had been my take on prominent Patriarchist Doug Phillips’ sexual abuse of a young woman. The new record holder - by a huge margin - is my post on the sexual abuse of minors by another figure in the Patriarchy movement, Josh Duggar.

But the Duggar meltdown has been far from the only catastrophic blow up this year. Bill Gothard was outed for sexual abuse (sense a theme?), Doug Wilson’s marrying of and defense of a pedophile came to light - and his attempts to destroy the victim of another abuser.  Mark Driscoll melted down as his financial abuses came to light, Tullian Tchividjian turned out to have lied about affairs. Meanwhile, those remaining in the neo-Calvinist and Patriarchy/Complementarianism camps have circled the wagons, doubling down on their poisonous doctrines even as it becomes ever clearer that they cover up and facilitate abuse.

It hasn’t been any better for the GOP, whose front runners are a narcissistic bully, and a man in thick with the Dominionist and Historical Denialist crowds.

As they say, the chickens are finally coming home to roost.

But personally, it has been a good year in many ways. There has been a lot of music, as the Bakersfield Symphony’s new conductor has expanded our concerts. I’ve played Beethoven’s Eroica and Tchaikovsky’s String Serenade (two bucket list pieces). The family and I have traveled quite a bit, seeing seven national parks for the first time. I’ve seen a superbloom in Death Valley, watched thunderstorms chase each other across the Utah sky, stood on top of sand dunes in two different states, summited a 10,000 foot tall volcano with my kids, and hiked by the light of the stars. We’ve camped and hiked and run races and in the process listened to a whole lot of audiobooks together.

My own journey has continued. Every time I think I have finished deprogramming from my years in Cultural Fundamentalism, I find there is more. It has been discouraging to see how deeply committed to Patriarchy some of my acquaintances still are, but I have also seen others break free - and that always makes me happy.

Probably this year, more than any other, I have had to face the fact that there are two competing historical narratives. The first, that the world is getting worse and worse as time goes on - and particularly as religious institutions lose political power. The second is the one that is based on the actual history of the world which shows that humankind has become so much less violent than it was, and that the role of religion in this transformation is complicated at best. Unfortunately, the need to believe the first narrative has led to outright historical denialism and the embrace of lies.

For that reason, I am going to name The Better Angels of Our Nature by Steven Pinker as the best and most influential book I have read since post 300.

Thinking of the best books I read since 300, I have to specifically mention Rainer Maria Rilke’s The Book of Hours, a gorgeous volume of poetry expressing the inexpressible longing for communion with the divine. I’ve also read some amazing books on neuroscience, mythology, flight. And the funniest takedowns of state fairs and cruise ships ever. So many things to read and learn.

As this journey continues, I intend to keep reading and exploring, seeking always to be genuine and true to myself and others, to hate and expose evil, and to cling to what is good.

This is still representative of me: 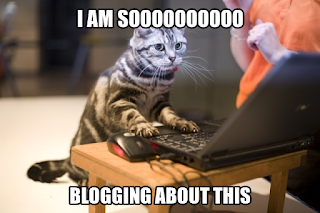 Posted by Diary of an Autodidact at 12:47 PM