In what has to be one of the most overdue developments, the United States will finally honor a woman on paper currency. We’ve previously honored Susan B. Anthony and Sacajawea, but they appeared on dollar coins, which is not that far off from having a plaque in the basement bathroom of a museum.


Harriet Tubman, who was a key figure in the Underground Railroad, which helped countless slaves escape to freedom, will be replacing Andrew Jackson on the $20 bill. Tubman won the Treasury Department’s poll, narrowly beating out another worthy candidate, Eleanor Roosevelt. I’ll leave the praise of Tubman to others - she richly deserves the honor, and I am thrilled that she was chosen.


I want to discuss Jackson, because I think it is a travesty that he was ever placed on currency in the first place. (Oddly, even the Treasury itself doesn’t know the answer to why he ended up there…)  I also think Jackson is worth discussing because he remains somewhat of a folk hero in many Conservative circles.


Why is Jackson popular? As far as I can tell, there are a few reasons. The one makes sense: he was the first non-aristocratic president, so there is the “common man” vibe about him. Second, he opposed both Federal banking and paper currency. A bit ironic that he would be the face of said paper currency, of course. For those who hate the Federal Reserve and wish to return the world to the Gold Standard, I suppose he could be a patron saint. (He’s also revered in Libertarian circles because during his administration the Federal debt was zero...briefly.) Because of his opposition to the National Bank, he has a reputation as representing “small government” in some sense. This is ironic because in a number of key ways, he represents the closest the United States has come to a dictatorship (credit to a friend and colleague for pointing that out to me), and showed the least respect of any president in history for the rule of law. In fact, if you were to look at who caused the most death and destruction by ignoring the law and using his personal power over the military, it would be, hands down, Jackson.


In another bit of irony, his reputation as a self-made man also doesn’t bear much scrutiny.


Let’s start at the beginning. Jackson was indeed born to a widowed mother, and orphaned by age 14. He worked his way up through the army, then settled on a career as a frontier lawyer. (Back then, not much training was required…) Thus far, so good.


Things took a darker turn, though, in 1794. Jackson formed a partnership with a local judge for the purpose of purchasing lands “without as within military bounds,” a nice little euphemism for taking control of lands which had been previously guaranteed to the Cherokee and Chickasaw Tribes by treaty. Many years later, Jackson would represent the US Government in the “renegotiation” of these treaties, forcing the Tribes from the lands that would eventually become the Memphis area.


In addition to his legal career, Jackson took up cotton farming. So, these lands he stole from their rightful occupants were then turned into a plantation worked by slaves. His zeal for the removal of Native Americans and his use of slave labor were related. He believed that the land had to be “cleared” so it could be used for cotton - grown by slave labor, of course. In this way, he did much to aid the spread of slavery to new areas.


It wasn’t enough for Jackson to own slaves, however. A significant contribution to his fortune was made by engaging in slave trading. Even in Jackson’s own time, this was looked on as morally questionable. It was one thing to own slaves, but another altogether to sell and transport them, breaking up families and so forth.


Jackson served in the military during the War of 1812. He is, of course, best known for his victory in The Battle of New Orleans.

My dad used to sing this song to me when I was kid.


Less well known are his actions regarding the Creek Indians. The prior commander had negotiated a truce of sorts with them. The terms of this were onerous enough, but Jackson unilaterally tore up the agreement once he took over. Further concessions, including vast tracts of land were essentially confiscated on threat of massacre.


Even less known than this is the incident in New Orleans. After the battle, which essentially ended hostilities, Jackson refused to release the local militia members to return home. This prompted a local legislator to write an anonymous article in the local paper challenging this decision.


Jackson would have none of this. He declared all of New Orleans to be under Martial Law, and arrested and imprisoned the legislator. After a Federal judge granted a writ of habeas corpus for the release of the legislator, Jackson had the judge and the legislator’s lawyer imprisoned as well. All of this was flagrantly illegal, of course, but not much could be done, as Jackson controlled the army. 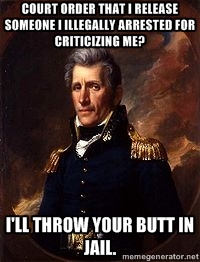 This would not be the last time Jackson defied the law in his capacity as a general. A few years later, in another military action, the First Seminole War, Jackson decided that the way to “terminate the conflict” was to invade Florida (a territory of Spain at the time). That we were not at war with Spain, and that Congress had no intention of declaring war mattered not to Jackson. Invade first, get forgiveness later. Which is basically what he did. Still, it sparked a major international incident.

Some modern presidents have been accused of starting wars without Congressional permission. There is some justice to this accusation. At least the President is legally "Commander in Chief" of the armed forces.

Jackson, on the other hand, while a mere general, took it on himself to invade a foreign country.


This determination to do whatever he wanted regardless of the law persisted into Jackson’s presidency. Long an advocate for forced removal of Native Americans from the South, he was a key advocate for the Indian Removal Act of 1830. The Act narrowly passed, being considered controversial even at the time. (Many realized it was inhumane and unjust, even as others considered the extinction of the Native Americans inevitable.) In 1832, a Supreme Court case, Worcester v. Georgia effectively declared the act unconstitutional by holding that Tribes were sovereign nations with valid treaties with the United States.


This did not deter Jackson. After all, he had the military at his back. As journalist Horace Greeley would later summarize Jackson’s (more wordy) response, "John Marshall has made his decision; now let him enforce it!" And so the trail of tears began, resulting in tens of thousands of deaths. 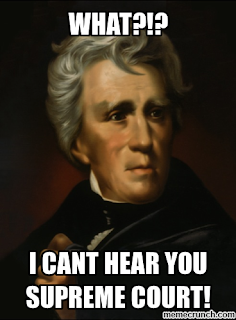 The deaths didn’t bother Jackson much. As he put it, “Humanity has often wept over the fate of the aborigines of this country and philanthropy has long been busily employed in devising means to avert it, but its progress has never for a moment been arrested, and one by one have many powerful tribes disappeared from the earth. … But true philanthropy reconciles the mind to these vicissitudes as it does to the extinction of one generation to make room for another.”


Yeah, too bad we are causing genocide, get over it…

On a related note, the Nazis took inspiration from the Trail of Tears, citing it as the pattern they wished to follow for the expulsion and intentional starvation of the Poles and Slavs in order to make way for the "superior" race. Not something to be proud of.


Jackson’s other legacies aren’t exactly great either. His economic policies - including his shutdown of the National Bank and the demand for payment in gold or silver for land purchases from the government - were significant factors in the Panic of 1837.

His most notable Supreme Court appointment was Roger B. Taney, who was best known for his majority opinion in the Dred Scot decision. You know, the one that held that Blacks couldn't be citizens and remained slaves even in free territory. The one that has nearly unanimously been deemed the worst Supreme Court decision of all time. Nice legacy.


The other legacy, which persisted nearly until the turn of the century, was the Spoils System, wherein government employment was based on politics, not merit. His views of civil service led to decades of corruption and graft.


And about that whole “limited government” thing? If the proof that he believed he could and should do whatever he wanted, including foreign invasions, arrest and imprisonment of judicial officers, and defiance of the Supreme Court weren’t enough, keep in mind that he also allowed the US Post Office to refuse to deliver Abolitionist tracts, pushed for a Congressional resolution that Abolitionist bills could not even be discussed, and was censured by the Senate for removing government funds from the U.S. Bank without congressional authorization. In other words, he considered himself above the law, first as a general, then as a plantation owner, and finally as President.


I know a lot of people admire him, and will probably take issue with my description of him. Keep in mind, however, that the facts I have cited are part of the public record, easily discoverable with a minimum of research.


So here we have a man who built his fortune by the illegal “purchase” of land from its rightful owners, slave trading, and slave labor. A man who invaded a foreign country without authorization. A man who - in response to a critical newspaper article - imprisoned a judge, lawyer, and the author of the article. A man who disrespected the right to free speech while president.


And above all, a man who championed and ordered a genocide.


That this man has been on US Currency for 90 years is an embarrassment. Maybe, finally, that will change. 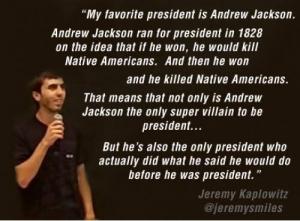 
I can’t resist noting that we actually have a modern day analogue to Jackson.


Hmm, a man who claims to have risen to wealth on his merits, while actually gaming the system. Who speaks of committing war crimes and genocide as if necessary to “win.” Who cultivates an image of violence. Who calls for the curtailing of free speech if it criticizes him. A man who believes that governance is a matter of him getting his way through force and disregard of the law. A man whose central platform is the forced expulsion of 11 million brown skinned people.

Posted by Diary of an Autodidact at 5:33 PM