I first read Captains Courageous in my high school days. In fact, it was one of the first in my collection of Readers’ Digest hardbacks. (Not condensed, this is a set of classics that they put out a while back.) I had looked forward to reading this to my kids for some time, as I enjoyed it a lot back in the day. 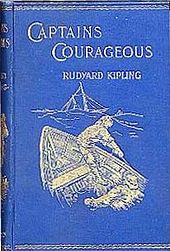 First, the bad part. I had forgotten how racist Kipling was. Probably, when I read it, I didn’t notice as much, both because I was caught up in the story, and because I wasn’t as aware of the more subtle instances. Sure, there were too many uses of “n____r,” but Mark Twain and many others from the Victorian Era used the word. But I had forgotten - or not noticed - the general condescension toward all people of color. Even the Portuguese aren’t “real” whites in this book. So, there is that issue, which is a problem throughout Kipling - and a number of other Victorian authors to one degree or another. (And beyond. Conrad is problematic in some of his books for the same reason.) Realize this going in, and discuss it, I guess.


That out of the way, there is a good reason why I loved this book. It is a truly classic coming of age story, and one in which an arrogant young man learns to recognize true character.


Without spoiling too much of the plot, here is the setup: Harvey Cheyne, the teenaged son of a millionaire railroad magnate, is traveling with his mother to Europe on a steamer. He annoys the crew with his bragging, so when he bums a cigarette, they give him a super strong cigar. He can’t handle it, is sick, and falls overboard. He is rescued by Manuel, a Portuguese fisherman employed on the We’re Here, a schooner. After he comes to on board, he is unable to convince the crew that he is wealthy, so he has no choice but to take the captain’s terms: a job on the boat in exchange for a fair wage for a novice.


I’m not much of a fan of violence against children or teens, but I have to say, even now, there is something immensely satisfying when the captain, Disko Troop, bloodies Harvey’s nose. Harvey is a little snot, and he needs a comeuppance in the worst way. It is also clear that nothing is going to get through to him short of a complete reordering of his world.


Kipling spins a tale, then, of Harvey’s transformation as he learns what real work is, and of the nobility and honor that is contained in honest workers everywhere. Although Kipling retains his respect for the wealthy, he truly conveys in this book the truth that “the shoes don’t make the man.” And likewise that there is no shame in honest labor even if the pay is low.


The other thing that I love about this book is the characters. Disko Troop, of course, as the stern but steady captain. He is perhaps the most skilled captain in the fleet, and men - even his competitors - respect him. Harvey underestimates Disko - and Disko underestimates Harvey - not that anyone blames Disko. And both are able to admit their faults eventually. And there is Long Jack, who served on a man-of-war, and thus knows plenty of battle, even if his grasp of politics is a bit shaky. Dan, Disko’s son - about Harvey’s age - who does his best to give Harvey the inside information necessary to keep out of (at least most) trouble. Uncle Salters, Disko’s brother, who is both unlucky and unskilled. Taken on as a charity case, he is more at home discussing his own pet theories of agriculture. However, her has another advantage, in that he is good with another charity case on the boat: “Pennsylvania Pratt.” Pratt was formerly a minister, but went insane after his family was killed in the Johnstown Flood. Kipling deals gently with this gentle and troubled soul - as does the ship’s crew. There is the superstitious cook, African by way of Scotland. Alas, he gets the short shrift and a bit of condescension. And finally, there is Manuel, who, despite Kipling’s casual racism, comes off as one of the best characters after all. He is unquestionably the best fisherman on the boat, and has every bit the moral compass that Disko has, with perhaps more compassion. If I had to partner with one of the characters, it would be Manuel.


There are a few other interesting bits in this book. One whole chapter is devoted to the madcap railroad trip from California to Massachusetts that Harvey’s parents make after he is able to contact them on his arrival. Kipling researched this book extensively, both the sailing and fishing, and the railroad episode. It shows, as the specifics make sense (if you care about that sort of stuff…)


Another interesting thing about this book is how Kipling portrays the changing times. The sailboats are on their way out, as anyone can see. Steam is the future, just as it is the present on the railroads. Kipling doesn’t seem happy about the change, but he accepts it. Likewise, there is a changeover from British dominance to American. Kipling may have seen the writing on the wall, even though this was written at the peak of the British Empire. Things would change, and the English way of doing things would give way to the American.


One way this shows itself is in the story of Harvey’s father, who is a “self-made man,” in the American tradition. He started at the bottom, and worked his way up, becoming a millionaire through a combination of hard work, the ability to read people, and some good luck at crucial junctures. (This is both realistic and the way that even American mythology read back then. The idea that luck is irrelevant is a newer idea, probably connected with the need to give an explanation for the poverty of African Americans without having to admit systemic racism.)


Again, Kipling notes the change that is coming, even if he isn’t thrilled about it. He respects it, however, and gives the usual stiff upper lip.


Captains Courageous is one of Kipling’s best books, despite its flaws. The kids enjoyed it, and I enjoyed the re-read. Maybe in a few years I can introduce them to Puck of Pook’s Hill.


This is one of those books that puts me in mind of music. I’m a bit of a musical omnivore, so I have a few Country artists that I like. One of those is Clint Black, who is one of the better songwriters of his era. The best of his albums (in my opinion) is Nothing But The Taillights, which remains in my regular rotation.


A great track from that album is this one, which captures the ideal of the American egalitarian instinct. Never disrespect a man because of his occupation, and never give up looking for ways to keep on seeing our better days.

Posted by Diary of an Autodidact at 11:47 PM

Email ThisBlogThis!Share to TwitterShare to FacebookShare to Pinterest
Labels: adventure, Fiction, Kipling, Reading With my Kids