Journey to the Center of the Earth by Jules Verne

Source of book: I own this, but borrowed an audiobook from the library for our trip.


This is the second audiobook by Jules Verne we have listened to together. Previous Verne books reviewed are:


Around the World in 80 Days (audiobook)
The Mysterious Island


It has been quite a few years since I first read this book. It must have been in my teens, probably late teens, as I purchased my copy of the book some time after I got my own room at age 16. It is kind of weird to re-read a book after that long of a gap, because one may well remember the outline of the plot, but forget some details that were not as memorable then as they are now.


The plot of the book is pretty straightforward. The eccentric and impetuous professor Lidenbrock drags his reluctant and timorous nephew Axel to Iceland to seek a passage to the center of the earth, based on a cryptic (and encrypted) note he discovers in an old book. This note purports to be from a fictional Icelandic alchemist, who claims he had been to the center of the earth - and gave directions to the path.


When they arrive in Iceland, Lidenbrock procures the services of Hans, a reticent and stoic hunter, to guide them to the entrance. Hans is convinced to accompany them further. Provided he gets paid at the end of each week.


After they enter the crater, they must find their way down the path, encountering various obstacles and dangers. Eventually, they reach a vast underground sea, which they sail across on an improvised raft, before a catastrophe results in their being returned to the surface thousands of miles from their starting point.


This book was written in 1868, a time in which a great many discoveries were being made. Verne is commonly considered to have established the genre of Science Fiction - although credit for the first Science Fiction novel really should go to Mary Shelley, for Frankenstein. A mere five years prior to Journey to the Center of the Earth, the geologist Charles Lyell had published his second revolutionary work, Geological Evidences of the Antiquity of Man. This built on his work, Principles of Geology, which had established that the earth was very old indeed, and not a mere 6000 years old. The later book brought together three ideas that had revolutionized the study of science in the preceding decades. First was the discovery of past ice ages (hat tip to Louis Agassiz), Darwin’s theory of evolution by natural selection, and questions about how long mankind had existed. Lyell had previously been skeptical of both ice ages and an ancient origin of humans, but in the second book reversed his opinion, based on the wealth of scientific evidence that had accumulated in the decades since.


Both of Lyell’s books appear to have strongly influenced Journey to the Center of the Earth. On the one hand, Verne disputes the idea that the center of the earth is hot and molten. (This idea has proven to be true, making Verne wrong, in a surprisingly rare misstep.) On the other, the journey is just as much through time as it is through inner space. Early on, the travelers traverse rock layers filled with fossils, placed roughly in the order of the geological column. Later on, they encounter extinct flora and fauna by the underground sea. A modern scientist might wonder how these creatures largely escaped the forces of evolution, but we’ll cut Verne some slack here. After all, he was writing not too long after The Origin of the Species and a few years before The Descent of Man. This was all fairly new, and Verne explores the ideas with a sense of wonder, rather than a true devotion to accuracy.


In that sense, that is Verne’s best skill: asking “what if?” and following the ideas that came to him through the course of an adventure.


The general consensus (which I believe is correct) is that Verne’s best works are 20,000 Leagues Under the Sea and Around the World in 80 Days. Both of these books have the most coherent plots, and the most memorable characters. My wife prefers the latter, and there are solid reasons for loving that book. As one significant factor, it is the rare Verne novel that has a female character who is more than a passing reference. On the other hand, it is the most “realistic” book, one which indulges little if at all in an imagination of the future.


Journey to the Center of the Earth, on the other hand, is full of classic Verne speculations on science, particularly electricity and geology.


Where the book loses momentum, though, is at the end. It seems as if Verne got tired of writing the book, couldn’t figure out how to end it, so he rather suddenly engages a deux ex machina of the natural sort to complete things. The reader may be forgiven for feeling left suddenly at the end without a sufficient explanation.


The other disappointing things I noticed from this reading were Verne’s casual sexism (which isn’t always as noticeable due to the lack of females), and the whininess of Axel, who narrates the book. Verne generally chooses his narrator to be a foil to the true protagonist, usually the bold scientist. In some cases, such as Passepartout, this person is a memorable character in his own right. Axel is a bit disappointing in that he is memorable mostly for worrying and complaining, rather than for more pleasant traits.


I should also mention that a common issue with Verne novels is the poor quality of early translations in many cases. Since these are in public domain, and already well known, they have tended to endure, despite the slipshod work. One can only hope that more of these books will be given a truly excellent translation which is more faithful to the original.


In any case, despite these faults, Journey to the Center of the Earth is one of Verne’s most memorable books, full of adventure and imagination.


The book in which the note is found is a real work by Snorri Sturluson - a real life Icelandic historian and poet. He is one of the sources we have for the Norse civilizations of the past, as he wrote down many of the legends for future generations. He was also notable for idea that the “gods” were originally real people, who became mythical later as time passed. At the time (the 1600s), this was a bit revolutionary in his own culture, and he got a bit of grief from the political sorts for it. Some things never change.


The volcano which the explorers enter is also a real place. I couldn’t determine whether Verne actually visited it, but he must have at least had a detailed description to rely on, because the portions of the book set in Iceland fit well with the actual facts of the places described. In any event, the Snæfellsjökull is really quite lovely, as this picture attests. 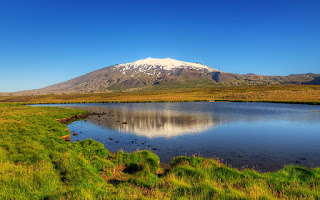 Snæfellsjökull
Photo by Axel Kristinsson  (used under the Creative Commons license)
Posted by Diary of an Autodidact at 9:36 PM