The Servant of Two Masters by Carlo Goldoni

Modern actors often complain of being “typecast.” One might be the comic aunt, or the villain with the bass voice like Christopher Lee, or a number of other less lucrative parts. Or one might, like Leonard Nimoy, become so associated with a particular character that one can hardly be envisioned as anyone else.


Well, in the Italian Renaissance theater known as Commedia dell’arte, this quite literally was the way actors were. One learned a particular “stock” role, and continued to perform it for one’s entire career. Not just that, but the plays and plots would change, but the characters would always be the same. You would have the young lovers, the miserly merchant, the stuffy self-important professor, the crafty servant, and so on. These “types” would then be plugged into a stock plot, and the actors would be expected to improvise the dialogue.


With the exception of the young lovers, all the actors would wear half-masks representing their “type.” The tradition lived on in more familiar versions, such as the Punch and Judy shows. Furthermore, many of the “types” - and plots - would find their way into operas of the Italian style.


As the old saw goes, opera can be summarized thus: The tenor wants to make love to the soprano, but is prevented by the baritone. If it is a tragedy, everyone dies. If it is a comedy, the mezzo assists the lovers in finding happiness. 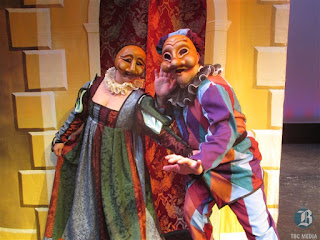 "Smeraldina" and "Truffaldino" from the CSUB Production.
Media photo by director Mandie Rees.


This play, written by Carlo Goldoni in 1746, was written at the request of Antonio Sacco, a famous comedic actor who played the role of “Truffaldino,” a variant of the “Harlequin” role. In this case, it is the role of the crafty servant. Like its inspiration, the play contains some room for improvisation, but in a “modern” twist, much more of the dialogue is written out.


We saw a performance of this by the California State University Bakersfield theater department. There were a number of delightful period touches. The costumes were appropriate for the “types,” including Truffaldino’s multi-colored garb. There were half masks on most of the characters. There was a wagon that opened into a stage, which then became part of the set. (The rest of the stage represented the town square and the house of the merchant.) The music was mandolin arrangements of Italian songs, some of which may have dated to this era. In a nice touch, many of the tunes were from operas, giving the link between the Commedia dell’arte and Grand Opera.


The basic plot is this: Beatrice has come to Venice disguised as her brother, who has just been killed in a duel with Beatrice’s lover, Florindo. Beatrice has come to do two things: find and marry Florindo, and collect the money that Pantalone owes her brother. There is a complication, however. Beatrice’s brother was engaged to Pantalone’s daughter, Clarice, who has never met him. She is in love instead with Silvio, the son of the pompous doctor. Pantalone is determined to keep the prior pledge, to the satisfaction of exactly nobody but himself.


Meanwhile, on her way, Beatrice picks up Truffaldino as her servant. He is a bit of a smart-ass anyway, and manages to irritate everyone with his antics. Except Clarice’s servant Smeraldina, who falls for him immediately.


Beatrice, however, seems to lack something as a master. Namely, a sense of dinnertime. Truffaldino’s great goal is to get some food in his empty stomach, and Beatrice’s obsession with her goals prevents her from dining in a timely manner.


Frustrated, Truffaldino decides to freelance a little, offering his services to Florindo, who has no idea that Beatrice is there. Suddenly, Truffaldino must navigate some treacherous waters, as people give him messages and money “for your master,” but because he has two, he cannot reliably figure out which master. This is compounded by his illiteracy (which becomes a running joke, as he must somehow explain why he has opened letters and keeps a journal), and his need to keep his double life secret.


The culmination of this double dealing is a hilarious scene in which he is acting as a waiter to both masters, neither of whom knows of the other’s existence. He runs himself to exhaustion - and famine - until the end, when he is finally rewarded by four bowls of spaghetti, which are (in this version) dumped on his head as the curtain falls.


Needless to say, this will take some sorting out before all comes out (mostly) well in the end.


It is hardly an unusual convention, but as in many plays - and operas - the servants get the best lines. And also the ones that say the most about society.


As an example, in this play, much is made of the fact that Clarice is caught embracing Beatrice (who is still dressed like a man.) Clarice knows that Beatrice is a woman, but she has been sworn to silence. Why won’t Beatrice reveal her identity? Well, she knows that Pantalone won’t pay his debt in full if he knows he is dealing with a woman. Instead, he would set himself up as her ward - and skim a bit off the top.


But this causes complications, because Silvio is now certain that Clarice has given herself to another. She is soiled goods. As Smeraldina gives as an aside to the audience, men can play the field if they like, but expect women to be pure and faithful.


CSUB does a nice job with the production. For obvious reasons, this isn’t at the level of the best professional theater, but the actors were expressive and committed even during the most silly of plot points. In particular, I thought that Truffaldino and Beatrice were well performed. We saw the opening night, but I did not detect any glitches. The CSUB theater department is a reliably enjoyable experience, and this production of a fairly obscure classic is well worth seeing.


There are many examples of works for stage and theater that play on the Commedia dell’arte tradition, but here are two of my favorites:


Stravinsky also wrote Petroushka based on the characters, but Pulcinella, both in the ballet form, as found here, and also in the suite for chamber orchestra, is one of my favorite works. I love Stravinsky in all his moods, but there is something particularly charming in his witty remix of Baroque styles - and the Concerto Grosso form. The half masks and stock characters are on great view in this version.

Prokofiev’s opera, The Love For Three Oranges is based on a play by Carlo Gozzi, a contemporary of Goldoni. While the opera itself is worth a listen, I am fond of the music selected for the orchestral suite. I have had a chance to play the suites from Romeo and Juliet, but hope we get to do this one at some point. Let this one play the whole way through. If you don’t at least recognize the march, I’d be surprised.

Posted by Diary of an Autodidact at 10:35 PM