G. K. Chesterton has long been one of my favorite authors, as well as a member of my fantasy dinner party. In fact, with six reviews, Chesterton in third place on this blog, behind Shakespeare and P. G. Wodehouse. Unlike either of them, Chesterton is represented by three genres: Fiction, Non-Fiction, and Poetry. Here are my past reviews:

The Flying Inn
Heretics and Orthodoxy
The Man Who Knew Too Much
New Poems
St. Francis of Assisi

I read it long before I started blogging, but I consider The Ball and the Cross to be one of the most influential books I have read. (You can find the whole list - as of 2014 - here.) 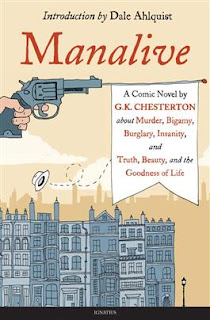 The title of this book seems to be a microcosm of Chesterton’s life and writing. He was, unmistakably, a man alive. I have described him in the past as an overgrown five year old boy, and I still think that is a good way to put it. Everything seems new and thrilling to him, and ennui is impossible.

This is the factor that compensates for some of his other faults. There is a caricatured Jew in this book, which is unfortunate. Chesterton does tend to get preachy from time to time. Sometimes, it works with the narrative. Sometimes, it is more of a distraction. But even in the preaching, he is, as Don Marquis put it, one of “those who could / communicate to you / that they had / just purchased /  ten cents worth / of paper napkins / and make you / thrill and vibrate / with the intelligence.”

Not that Manalive is all preaching, though. It is, like other Chesterton novels, a romp. Unlike most, though, it takes place in a very small area: a boarding house. As one might say, if the characters will not come to the adventure, the adventure must come to the characters. And it does, in the form of a tall and peculiar man by the name of “Innocent” Smith. After his arrival in the midst of a windstorm, Smith proceeds to turn the place upside down, eventually ending up on “trial” to prove he is not criminally insane.

The central question in this tale is that of social convention versus virtue. Is what we value as “virtue” truly goodness, or is it merely compliance with unwritten social rules? And are many of the things that we recoil from as unthinkable actually just failure to follow convention?

Innocent Smith throws himself into adventure and silliness with abandon, fires a gun in the general direction of someone, and is about to elope when he is put on “trial,” an informal proceeding involving a stuffy American professor. In every case, he is shown to be innocent, as his name implies.

Chesterton draws the idea from other books in this tradition, I suspect. Don Quixote is a more humorous example, but the good Don also exemplifies a weird sort of wisdom even as he remains out of touch with his times. Shakespeare too uses the fool who is flippant and feckless, but who has more than a touch of wisdom below the surface.

Woven into the narrative and its central theme is a strong polemic against upper-middle-class disdain for the poor. Chesterton often seems bourgeoise, and for good reason. The little glasses, the cigar and port, and all those British signifiers of class. But underlying that, he always has a belief that it is just foofaraw. And he bristles at the idea of patronizing the poor or even the criminal class.

Just a few quotes from the book will serve.

She [the landlady] said he was “a real gentleman,” by which she simply meant a kind-hearted man, which is a very different thing.

Later, in a letter describing an incident involving Smith, a clergyman describes a speech to working class men.

Some hours afterward the storm broke. I had been addressing the meeting for some time, pointing out the lack of thrift in the working classes, their insufficient attendance at evening service, their neglect of the Harvest Festival, and of many other things that might materially help them to improve their lot.

This is kind of a pet peeve of mine. It remains fashionable 100 years after this book was written for members of the middle class to lecture those with one fifth or even one tenth as much income about frugality. It is no more attractive now than it was then.

There is a companion letter by another clergyman who witnessed the proceedings, and later followed Smith on a rooftop caper. This second clergyman has an epiphany from this meeting with Smith.

I liked the church as a pretty pattern; discipline was mere decoration. I delighted in mere divisions of time; I liked eating fish on Friday. But then I like fish; and the fast was made for men who like meat. Then I came to Hoxton and found men who had fasted for five hundred years; men who had to gnaw fish because they could not get meat - and fish-bones when they could not get fish...In the face of that I had to become revolutionary if I was to continue to be religious.

And later in the same letter, he describes the priest of the first letter:

He is a perfect gentleman; that is his complaint. He does not impose his creed, but simply his class. He never said a word of religion in the whole of his damnable address...When this helpless aristocrat had praised cleanliness in the body and convention in the soul to people who could hardly keep body and soul together, the stampede against our platform began.

This has indeed been some of my own journey over the last few years. If I am going to continue to be a religious person, I can no longer seek to impose my class rather than my creed. It has been a gradual revelation that the Religious Right cares far, far more about a certain white middle class culture than the teachings of Christ. Chesterton was prescient, 100 years ago. Perhaps the United States is just that far behind the English aristocracy.

There are a couple of other interesting lines in this book that really stood out. The first occurs as part of a conversation between Smith and a Russian station worker, recounted by the worker in a letter. Manalive was published in 1912, between two major events in Russian history. The first was the Revolution of 1905, in which ended in some reforms, but never went far enough. By 1912, there was considerable unrest and intermittent terrorism. Most everyone knows what happened a few years later.

Anyway, there is this little line stuck in:

I am a Liberal, and do my best to spread Liberal ideas; but since the failure of the revolution this has been even more difficult. The revolutionists committed many acts contrary to the pure principles of humanitarianism, with which indeed, owing to the scarcity of books, they were ill acquainted. I did not approve of these cruel acts; though provoked by the badness of the government; but now there is a tendency to reproach all intelligents with the memory of them. This is very unfortunate for intelligents.

Little did Chesterton know how long this would reverberate. Even now, a half century after the McCarthy era, fears of “communism” still are used to shut down any discussion of how to reduce inequality or fight systemic racism, and so on. We are always one civil rights law or tax increase away from the Gulags. I find it interesting that the speaker also cites George Bernard Shaw. Now, I have no idea if any station worker in Russia at the time was familiar with Shaw, but Chesterton, as always, has a point here. Chesterton and Shaw were friends, and rivals. Far apart both philosophically and in temperament, they engaged in a famous series of debates, all while respecting each other greatly. Chesterton would write, after Shaw’s death, "It is necessary to disagree with him as much as I do in order to admire him as much as I do." Shaw himself wrote glowingly of Chesterton as a person, even as he disagreed with his ideas.

In this case, though, I think Chesterton intends a favorable mention of Shaw, as one of the purveyors of humanitarian ideals in service of socialism.

The last line I wish to mention comes from one of the rare quotes from Innocent Smith himself, who rarely speaks for himself in this book. But here, he is quoted by the second clergyman.

And that is the essence of Manalive, distilled down. Since we are not dead yet, maybe we should get on with living.


Posted by Diary of an Autodidact at 4:43 PM