Source of book: We own this

My kids loved the first book in this series so much that they requested the second be read right away. You can read my review of The Mysterious Benedict Society here. 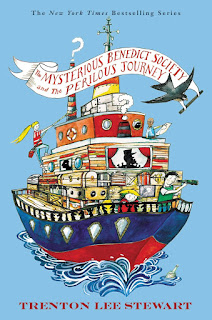 This book continues the adventures of the four children (Reynie, Kate, “Sticky,” and Constance) and their mysterious and eccentric mentor, Mr. Nicholas Benedict. A few things have changed since the last book. Kate was reunited with her father, Milligan; Constance has been adopted by Mr. Benedict; and Sticky has been reunited with his parents. Reynie is the only one for whom status quo applies. He remains living with his teacher, Miss Perumal, who had (for all intents and purposes) adopted him prior to the beginning of the first book.

The book kicks off with the children being reunited for a party at Mr. Benedict’s house, but there is a huge problem: Mr. Benedict has been kidnapped by Mr. Curtain (Mr. Benedict’s evil twin). The plan had been for the children to follow a series of clues to join Mr. Benedict on a voyage, but with him incapacitated, the children must decide how to proceed. Unsurprisingly, they decide to slip away quietly and continue the quest as if nothing had happened, hoping to rescue Mr. Benedict in the process.

Thus, as in the first book, the children spend most of the book fending for themselves and living off their own wits. In this case, however, the children aren’t simply trying to solve a mystery, but are following deliberate clues left by Mr. Benedict. For me, this changed the character of the book a bit, because the reader is encouraged to solve the clues before the children at each stage. The other book seemed significantly open-ended in comparison, even if the plot was ultimately determined by the author in each case.

There is no sense in spoiling the plot, naturally. One can safely assume that the main characters have to survive to feature in the next book in the series, so that isn’t much of a spoiler.

For me, there were some disappointments, but also some things I liked about the book.

First, the one thing I felt ambiguous about. The original book is set in a fictional town which could be anywhere. I mean, it was culturally familiar as the 20th Century in a Western country - or the fairyland equivalent - but it wasn’t tied to a real-life location. In contrast, the second book pretty clearly places the setting in the United States, and the action primarily in western Europe. Nothing wrong per se about that, but I’m conflicted. On the one hand, the clues are easier to solve with real locations in mind, but on the other, I kind of liked the imaginary world of the other book. This book seemed a little less like fantasy than the other.

As before, the characterization is pretty decent. The children continue to have their personalities and roles, but Constance in particular is a more complex character in this book than the last. If anything, this book shifts from a primary focus on Reynie to a more balanced examination of the thoughts of the other characters as well.

On the other hand, we had much less of Mr. Benedict, which was disappointing because he was a strong character that added to the narrative. Likewise, it would have been interesting to see more of Rhonda and Number Two. At least we got more of Milligan this time.

In any case, the series is a worthy modern addition to the universe of Children’s literature. This book, while different from the first, is still an exciting adventure, full of danger and mystery.

Posted by Diary of an Autodidact at 10:10 PM

Email ThisBlogThis!Share to TwitterShare to FacebookShare to Pinterest
Labels: adventure, Fiction, mystery, Reading With my Kids