The Truelove by Patrick O'Brian


The Truelove is the 15th book in O’Brian’s Aubrey and Maturin series. I have already introduced the author and the series in previous reviews. I began the series some years before I started blogging, so my reviews start rather in the middle. While some series, like the Hardy Boys can be picked up anywhere, these books need to be read from the beginning and in order, or the plots make little sense. In many of the books, the plot will arc across at least three books. Here are the previous reviews: 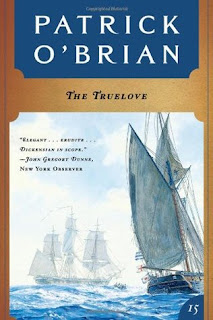 The Truelove picks up where the previous book left off. Jack is back in command of the Surprise, and has just shoved off from Australia, headed east once more. Stephen has recovered from his near-fatal run in with the platypus, and is once again at work with his fellow doctor, Martin, and his servant, Padeen, who he has sprung from the penal camps.


All is not well, however. One of the young officers-in-training has snuck a woman aboard - another escapee with a mysterious past. For the first part of the voyage, Jack has no idea what is wrong with his crew, who seem to be at odds with each other and disrespectful to him. When he finally does figure out what is going on, he must figure out how to restore order on the ship, and deal with his least favorite scenario: a woman aboard.


This also isn’t just a pleasure cruise. The ship has been sent on a mission to a remote south Pacific island. For the first time in many books, this is a purely military assignment, rather than one driven by Stephen’s job as a secret agent. Indeed, Stephen is not made privy to the orders, because of his political leanings in favor of Irish independence and his Catholic religion.


In essence, two rival tribes on the island are at war with each other, but are now being made into proxies for the colonial aspirations of the French and English. Jack’s job is to make sure the “right” side wins. That is, the one who will pledge loyalty to King George.


This is a morally dubious goal, at best, but it is unfortunately necessary, as the French have already interfered. Worse yet, the Frenchman who is interfering apparently has his own goal of setting up a utopian community - with the natives as servants, naturally. As a bonus, there is the potential rescue of the Truelove, a British merchant ship taken captive by the French.


As usual, O’Brian tells a tale full of moral challenges, of the bonds of friendship and the bonds of duty. The characterization is as excellent as usual, with few clear villains or heroes. Everyone has human failings, even the best of men - and women.


Likewise, O’Brian never candy-coats the past. The limitations of the medicine of the time are on full, awful display. Including the use of mercury as the closest thing they had to an antibiotic at the time, at least in their minds. Not only that, but the realities of sex and gender. O’Brian writes about the Regency era from a thoroughly 20th Century mindset, so there is no Victorian delicacy, shall we say. I wouldn’t say that the writing is particularly graphic, but it is unflinching. There are no lurid sex scenes, but sex is noted - typically by Stephen, the doctor - in clinical and matter-of-fact fashion.


In this book, there is particularly the matter of the woman, Clarissa Oakes, who isn’t eager to tell of her past. Except to Stephen. What is more, she is shockingly unembarrassed of her body - a peculiar thing for the time. As Stephen learns, she was raped by her guardian from childhood, and ended up, as “sullied” women of the time usually did, in prostitution. And yet, she was educated, and upper class. And so, she is both far more sophisticated than most on board, and yet emotionally detached from the sex act. Her treatment of her own body is a striking parallel to the way that Stephen treats - and indeed must treat - the bodies of those he attempts to cure. Just flesh. O’Brian slowly brings this analogy to light gradually as the plot unfolds. His pacing is superb, giving just a little information, then a little more, always keeping the frisson in the background.


In addition to the ethics of the Prime Directive (Star Trek reference…), the other dilemma that faces Jack is that of the means of maintaining discipline. Jack has the reputation as a humane captain, one who can run a tight ship without resort to violence. This particular case, though, forces his hand. The insubordination finally reaches the point where he must act - and in accordance with the law of his time. Which means that the lash is used. One of the best books I read in my teens was Richard Henry Dana Jr.’s epic non-fiction work, Two Years Before The Mast. That book, with its graphic description of the beatings common in the time actually led to the outlawing of the practice a few decades later. (Dana, a lawyer, was instrumental in this.) But back in the day, it was still very much the thing. (Churchill was supposed to have said that naval tradition was nothing more than “rum, sodomy, and the lash,” although the sentiment probably predated him.)


O’Brian’s books also have plenty of humor, of a delightfully dry sort. If you are into puns, Jack is simply awful, even by pun standards. Stephen has a wry way of observing events which is amusing. But in many places, there are little sparkles, such as the following exchange.


“Upon my honor, ma’am,” he [the awkward Mr. Adams] said when it was his turn to greet her, “I have never seen you look so well. You fairly light up our dim and shabby dining-room.”
“Dim and shabby dining-room,” said the gunroom steward to Killick in a sea-going whisper, “Did you ever hear such wickedness?”
“That is what we call a genteel compliment,” said Killick. “Which it ain’t meant to be believed.”


The cantankerous Killick, Jack’s steward, is one of the best characters in the series, and his acid remarks pepper this book.


One bit that one can either take to be humorous, or disturbing, depending on one’s point of view, occurred near the end, when Jack is choosing the members of the crew for combat with a French sortie. He is careful not to choose any “ancients,” meaning anyone under 35. Yet another reason I am glad to live in the 21st Century, when my middle aged self is still useful - and not “ancient.”


One final bit. Clarissa is as non-squeamish about most things as she is about her body. To Stephen, this is a real plus, as he collects specimens - as did other “amateur” scientists of his time, the ones who used their leisure time to further knowledge. Chief of them all is Sir Joseph Banks, a real person who appears in the series thinly disguised as "Sir Joseph Blaine." In fact, the real-life Banks was one of the greatest scientists of all time, although there is no evidence he was part of the intelligence community for Great Britain as "his" character is in the books. In any event, Stephen needs to send some important information to Blaine, and he uses Clarissa as his courier. Along with a letter with national security information in it, he sends some beetles he has collected on the voyage, both as cover for the real message, and as a genuine gift to Blaine.

[A great book on Banks and other scientists of the era is The Age of Wonder by Richard Holmes, reviewed here.]


Stephen expresses his gratitude that Clarissa doesn’t shy away from the insects.


“Very good. I do hate women that cry out ‘Oh beetles! Oh serpents! Oh mice or centipedes!’ and long to knock their silly affected heads together.”


Fortunately, I am married to a woman who has no such affectation. And my three daughters are likewise fond of things that creep and crawl.


The Truelove is another thrilling installment in the series, which is, in my opinion, one of the finest modern adventure stories.

Posted by Diary of an Autodidact at 9:37 PM