The Dharma Bums by Jack Kerouac


I have been meaning to read some Kerouac for some time, but hadn’t quite gotten to it. I suppose the most popular would be On the Road, or perhaps Big Sur. I ended up reading The Dharma Bums in large part because my brother-in-law recommended it, and went so far as to duplicate the hike that forms the center of the book. (See more on that below.)


Kerouac was one of the “Beat Generation” of the 1950s, along with Allen Ginsberg and William S. Burroughs. One can think of the “hippie” movement of the 60s beginning with them, and much of the music of that era from the Beatles on down drew inspiration from the Beats. In some ways, though, one has to think of most hippies then and now as bandwagoners compared to the originals.


As a lawyer, I tend to think of Ginsberg and Burroughs in connection with the obscenity trials that their works triggered. A significant development in Constitutional law here in the United States occurred when Howl and Naked Lunch were determined to be protected under the 1st Amendment right to free speech. The Supreme Court ruled that works which had “redeeming social importance” could not be banned. Thus, descriptions of drug use or sexual acts could not be automatically banned on that basis alone. The rest, as they say, is history.


The Dharma Bums is a semi-fictional book, based on Kerouac’s own younger life when he was part of the San Francisco Renaissance, enamoured with poet Gary Snyder. (Snyder is one of the very few of the Beats still living, probably because he was one of the few who didn’t drink to excess.) The story is a series of connected yet separate episodes, including a fictionalized telling of the Six Gallery Reading where Ginsberg debuted Howl, a hitchhiking trip east to Kerouac’s mother’s house and back, and a stay in a cabin with Snyder, before Snyder left to study Buddhism in Japan. The parts that I found the most fascinating, however, involved, not the city, but the wilderness. Snyder was - and still is - an avid hiker, and dragged Kerouac up and down Mt. Tamalpais (north of San Francisco), convinced Kerouac to work as a fire lookout in what is now North Cascades National Park, and convinced him to take an epic backpack trip up California’s Matterhorn Mountain, in the high Sierra Nevadas.


This last hike was of particular interest to me because my brother-in-law, who is, like Snyder, a natural born hiker, duplicated Kerouac’s trip up Matterhorn. Alas, my schedule prevented me from joining him on that hike. Fortunately, he took pictures, and posted them with the relevant passages from The Dharma Bums. You can see them here, and they are well worth the click.


He and I have, before and since, done some crazy hikes together. For instance, you can read about our day hike to Half Dome in Yosemite National Park here. The year after he climbed Matterhorn, we hiked to the base of the Palisade Glacier (the largest glacier in California) at 12,500 feet. 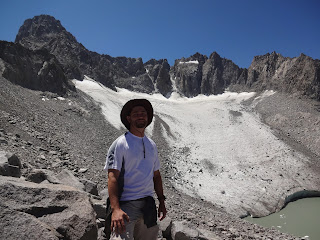 I dwell on the hiking because that part of this book was thrilling. Kerouac writes brilliantly about the mountains. In the style of his time and movement, the writing is a spontaneous approach, with the tale unfolding as if it was being told orally, made up or recalled on the spot. Or, one might think of it as being completely in the moment, as if you were there, with even the narrator not knowing what would come next. It isn’t a “stream of consciousness,” ala James Joyce, though. It is a narration that pours forth, not the momentary thoughts of the narrator. A key element of this style is the lack of editing. But don’t confuse this with writing that desperately needs an editor. Spontaneity requires practice, and Kerouac worked hard to be able to produce works like this. A great analogy would be jazz - which the Beats worked to imitate in words. A “spontaneous” jazz solo represents hours of practice and a wealth of melodic, harmonic, and rhythmic tools close to the hand. “Spontaneous” writing, likewise, comes from the pen of a skilled craftsman, working quickly and with skill.


The Dharma Bums, and Kerouac in general, isn’t perfect. There are times the dialogue seems clumsy, and transitions are often abrupt. I also have to admit that Kerouac would drive me utterly mad in person. As much fun as hitchhiking and jumping trains sounds - at least in the era when you could still do that - the lack of pre-planning, questionable choices, and self absorption was crazy-making even in print. Actually, anyone who knows me would think it laughable that I could ever be a bohemian, let alone a hippy. And they would be right.


And if I could be a hippy, I would probably be like Japhy (Gary Snyder), who at least had a plan, some self control, and a proper supply of food and equipment.


On the other hand, Kerouac may have been a challenge to be around, but he at least had a self deprecating manner in his writing, aware of his faults, and willing to poke gentle fun at himself. The adventures of Japhy (Snyder), Ray (Kerouac), and Henry (John Montgomery - a hilarious professor, who is impossibly unprepared and lacking in common sense) on Matterhorn are amusing in part because of the foibles of each character. It is truly a miracle that the trip didn’t end in disaster.


There is a conversation between Kerouac, Ginsberg, and Snyder that cracks me up. In the Penguin edition that I read, it is duplicated in comic-strip form in the inside covers. The characters as dogs is an interesting idea anyway, but it renders an already amusing anecdote doubly mirthful. The panel on the right is first, followed by the left, in this picture. The characters are (left to right) “Japhy Ryder” (Gary Snyder), “Alvah Goldbook” (Allen Ginsberg), and “Ray Smith” (Kerouac).

The other lines that really stood out to me were all about hiking.


I felt like lying down by the side of the trail and remembering it all. The woods do that to you, they always look familiar, long lost, like the face of a long-dead relative, like an old dream, like a piece of forgotten song drifting across the water, most of all like golden eternities of past childhood or past manhood and all the living and dying and the heartbreak that went on a million years ago and the clouds as they pass overhead seem to testify (by their own lonesome familiarity) to this feeling. Ecstasy, even, I felt, with flashes of sudden remembrance, and feeling sweaty and drowsy I felt like sleeping and dreaming in the grass.


“Although of course we know which way we are going, that big cliff face up there is where our plateau is.”
“Plateau? My God, you mean that ain’t the tip of the mountain?
“Of course not, after that we got a plateau and then scree and then more rocks and we get to a final alpine lake no biggern this pond and then comes the final climb over one thousand feet almost straight up boy to the top of the world where you’ll see all California and parts of Nevada and the wind’ll blow right through your pants.”


If you haven’t already, check out my brother-in-law’s outstanding photos of this spot.


One final quote. On the Mount Tamalpais hike, “Japhy” brings along the food.


On this trip Japhy had brought along a delicious combination for hiking energy: Ry-Krisp crackers, good sharp Cheddar cheese a wedge of that, and a roll of salami.


On our own, the kids and I have discovered that the combination of crackers, cheese, and salami is indeed the ideal hiking lunch, both portable and high energy. We take it along on the vast majority of our hikes these days, rather than sandwiches, which tend to get smushed in the backpack. Fun to find that others had discovered this 60 years prior.


The Dharma Bums was an interesting experience, thrilling for its wilderness and adventure, maddening for the hippiness of some of the incidents, and quite unlike anything I have read before. I agree with a few criticisms of the book. First, do not expect that Kerouac’s version of Buddhism will be anything like the real thing. While the book may be about his journey through that world (Dharma means “truth,” more or less) and he may claim to have various epiphanies throughout, one can expect to learn far more about Kerouac than about Buddhism. Second, the Beats were not exactly feminist, and Kerouac’s view of women in this book is more than a little misogynist. Although, it is hard to say it is more so than the 1950s were in general, I guess. It was the era of the Donna Reed ideal, and women struggled to break into the ranks of writers and intellectuals regardless of whether they were Beats or not. Just don’t expect any signs of early Second Wave feminism in this book. Society may have been a drag to Kerouac, but his reform didn’t extend to getting women out of the kitchen. After all, someone had to take care of all that stuff.


All in all, I am glad I read this book, and can say it was a pleasure. Not sure if I will find On The Road to be as good, since I think the wilderness portions were the best. On the other hand, I am interested in reading Desolation Angels. Another thing for my endless list of books I want to read.
Posted by Diary of an Autodidact at 10:30 PM