Source of book: Audiobook from the Library 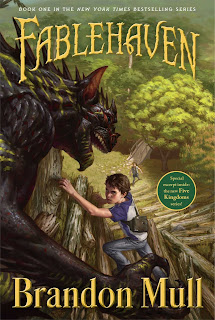 I am pleased to report that this book was a huge success with my kids. (I liked it too, but the kids’ opinion is what counts, since we will probably be listening to more on our trips.) In fact, my younger son liked it so much that he spent his Barnes and Noble gift card on a print copy for himself.

Brandon Mull is an interesting character. Apparently, he is a Mormon (according to his bio on the cover), and about my age. Fablehaven was a smash hit, and has become the first of a five-book series. With more planned. And he also wrote a couple of other series. So, we could be busy listening to these for a while.

The premise of Fablehaven is interesting. Youngsters Kendra and Seth spend a couple of weeks on their grandparents’ property while their parents are on a cruise. While there, they discover that the vast estate is actually a sanctuary, rather like a wildlife refuge. Except that it is for fairy creatures. This idea of a network of conservancies around the world for the preservation of creatures that most don’t believe exist is a pretty good one, I must say.

Mull carries the idea further in a couple of ways. First, the refuges protect not just the cute and “good,” but also the less beloved, or even “evil” fairy creatures, such as trolls. To protect everyone involved, there is an extensive treaty governing what can and cannot be done by mortals and fairies. For example, there is a sort of magical lex talionis, that “mischief shall be repaid with mischief,” and doing magic makes one vulnerable to magic, and so on.

The other way he extends the concept is by setting up an outside villain, the mysterious “Society of the Evening Star,” which is intent on destroying the refuges, on the grounds that they are a sort of “incarceration” of magical creatures, rather than a way to preserve them. In a way, this is like the Fairyland equivalent of PETA. There is a deeper metaphor, though.

It was hard not to see the entire book as being a parable of the fall of mankind, as the Christian (and Mormon) tradition sees it. Not that it is the only thing going on in this story, but the parallels and potential metaphors are definitely a huge part of the story. Thus the Evening Star (read: Lucifer - the Devil) is seeking “freedom” which isn’t freedom, disobedience looses the demon, and a bunch of other bits that clearly tend to function as theological touchstones. Mull does cite C. S. Lewis as one of his influences, so perhaps this should be no surprise.

That said, I do not want to create the impression that this book is heavy-handed. In fact, unless one already had the theological background, it might not even be all that noticeable. With an open mind toward the story as story, the book is exciting, suspenseful, and highly creative. Mull does indeed create a believable world, an idea that draws on existing myth while creating its own twists. The characters, too, are memorable, particularly the naiad who embraces mortality in exchange for love and adventure, and the plucky grandmother who has to figure out how to communicate after being changed into a chicken.

There are a few things worth mentioning, which I do not believe will spoil the plot. First is the fact that Mull draws from a variety of mythological traditions. There are the usual Greco-Roman myths, from Naiads to Satyrs. There are the European fairies and trolls, and the like. But there is also a Golem (not to be confused with Gollum), the creature made from earth of Jewish mythology. And then, there is the demon that threatens to be unleashed on the world, named Bahumat in the book, but I presume to be named after Bahamut, the giant fish supporting the earth in Arabian mythology. Fun connections.

There are a few notes that seemed a bit sour to me. The primary one was the bit about how Bahumat was imprisoned. The Native Americans, apparently, couldn’t figure out how to fight him, so it took the Europeans with their superior magic to imprison him. This seemed wholly unnecessary to the story, and likely an example of white tone deafness. Not that I would have preferred a “Magical Negro” description either. It would have been enough to have mentioned that Bahumat was eventually defeated and imprisoned without bringing history into it. After all, the rest of the book is fantasy anyway, so who cares if it is even set in a real world?

The other thing that bothered me was Mull’s harping on the necessity of innocence. Seth is a brat, to be sure. He is annoying as heck for the first half of the book, and he does screw everything up. (Again, a bit of a metaphor for The Fall.) But even though I personally identify with Kendra, the goody-two-shoes of the story - I too am a color-in-between-the-lines sort most of the time, I found this a bit too much. The growth of the characters would have been better if Kendra would have at least felt the pull of curiosity.

But these are minor quibbles in light of the whole story, which is well paced for suspense and adventure. This was a perfect traveling audiobook, helping the miles melt away for passengers and the driver. The kids loved it, so we will be adding this author to our regular traveling list.

Posted by Diary of an Autodidact at 9:11 PM