Northward to the Moon by Polly Horvath 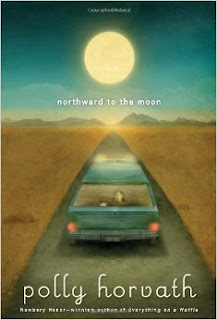 I’m going to start right off with the bad news. This book was, unfortunately, the most disappointing book I have read in a long time. We enjoyed two other Polly Horvath books this year, Mr. and Mrs. Bunny, Detectives Extraordinaire, and Everything on a Waffle. So, it seemed natural to expect that this book would hold the same wry humor and gentle satire of the others. Thus, it was disappointing that this one was unrelentingly dreary, in the “realistic” style often common in more adult oriented serious fiction. Horvath’s other books certainly had a degree of realism, and even unattractive characters, and so on, but there was always two things: a ray of light in the form of one or more likeable characters, and some comic relief to keep the weight of the world from being felt too heavily.

Apparently, this is the second book in a series, which might explain why the author expected the characters to already be somewhat familiar. It wasn’t hard to pick things up where they were, but I do wonder if I might have become more attached to the narrator/protagonist if I had met her in the earlier book.

Jane is the oldest of four children, who all have paternity which is doubtful (although one presumes the mother knows, but isn’t telling.) The man in their lives is Ned, who mom recently married. He is a bit of a ne’re-do-well, who can’t hold a job. As we discover in this book, his own family of origin is so dysfunctional that it is no mystery why he ended up the way he is. He isn’t mean, but he is clueless sometimes.

Ned loses his job - because he lied about his qualifications - and the family sets off to return to the mother’s inherited home in Massachusetts. They first have to visit the deathbed of a woman who took Ned in as a young man. She gives him a mysterious bag of money from his equally flaky brother. Under the circumstances, they assume it might be stolen. Or not, because nobody really has any idea. They then set off to find the brother, John, a trip which leads them to Las Vegas, and then Elko, Nevada. All kinds of stuff happens, none of which is good or pleasant, honestly, and they meet more of Ned’s family, most of whom are as dysfunctional as Ned, and less pleasant in the bargain.

Now, don’t get me wrong. I am not in any way opposed to “realistic” literature. I even enjoy novels which focus on characters which are not always pleasant, but are humanly complex. I’ve made no secret of my love for Anthony Trollope, among others, who write realistic tragedies. But I generally prefer that there be something to like. My experience (for what it is worth) is that there is plenty of dysfunction to go around, but that there is also a lot of good to be found. I guess I could compare it to a few short stories by Elizabeth Spencer (I reviewed Starting Over here), who also wrote about damaged relationships. One big difference, of course, is that Spencer isn’t writing for ages 9-12.

There were some good moments, such as the scene in the diner early in the book. Horvath has a real skill for observing humanity, and this comes out in her other books as well. If the rest of the book had show this degree of humor, it would have been nice.

Perhaps the worst part, for me, was the fact that the book just ended, without any real resolution of anything. Jane doesn’t really develop during the story, unless you consider gradual disillusionment to be a positive development. I know this tends to happen at that age anyway - I went through some of it myself - but it shouldn’t be the chief character development. Goodness knows that age is hard enough in real life, without it being that way in fiction too.

I won’t belabor the point further. I’ll just note that I had been thinking we might make Horvath a regular in our rotation, but I am kind of worried that there will be more “realism” and less humor and adventure in her books for tweens. If the kids want to read that kind of book, fine, but I’m not sure it is going to work for road trips, which in our case are a lot more fun than the sort Horvath took us on in this book.

Posted by Diary of an Autodidact at 8:52 PM

Email ThisBlogThis!Share to TwitterShare to FacebookShare to Pinterest
Labels: Fiction, Reading With my Kids, travel