I am an unabashed Mary Roach fan. Maybe because I have a thing for strong women with dry wit. (Hey, I married one!) Perhaps it is because she picks peculiar topics, then find interesting historical and scientific twists on them.

I previously reviewed Gulp, which is all about the alimentary canal. It was hilarious, although not for the weak of stomach. (See what I did there?) I also, a few years back, read Bonk, which is about sex. Well, sort of, and in a way that one would not necessarily expect. I decided at the time not to review it, because I wasn’t sure how friends and family would react. I guess I am a bit older, and less likely to care, because I wish now that I had written about it back then. Suffice it to say that Roach went some crazy places with it, and wrote about it all with an acerbic and deadpan style that was way too much fun. 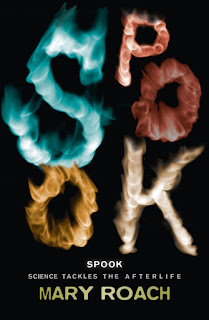 In Spook, Roach takes on the idea of the afterlife and the soul. She is a lapsed Catholic, and a natural skeptic. (I am a natural skeptic, but a devout Protestant, which makes me really fun at dinner parties…) In the course of this book, she visits India (to explore alleged instances of reincarnation), examines “ectoplasm,” recounts experiments aimed at weighing the soul, enrolls in Medium School, goes ghost hunting with cameras and recording devices, and pokes around in an old legal case in which a ghost makes an appearance. Along the way, she delves into the nature of electricity and the scientific revolution of the 1800s, millennia-old sexist views of the origin of life, and meets some really odd people. In other words, typical Mary Roach.

A few highlights are worth mentioning. In one chapter, she explores “infrasound,” that is, sound waves below the range of human hearing. In some cases, apparently, strong infrasound at the right frequency can cause phantom apparitions in peripheral vision. Thus, some areas that seem to be “haunted” have infrasound as a factor. (The effect doesn’t occur in everyone, though.) Roach notes the internet rumors that there are infrasound “weapons” that the government won’t tell you about, and asks one expert about them. Apparently, the attempts to create such a weapon were not successful. But that doesn’t stop her from imagining a use for one:

I used to have a neighbor who shoots high-decibel Eagles songs out his windows, causing nausea and extreme annoyance at a fraction of the cost. I’d have loved to get my hands on a retaliatory infrasound blaster.

The entire chapter on Medium School is pretty funny. Roach describes one session as follows.

Our tutor speaks to us for about fifteen minutes, but actual take-home instructions are thus far few. They amount more or less to this: Expand your energy. “Push out your energy, fill the room with your power.” It seems to be something you just try to do. I try, I really do, but I have no idea where my energy is located or how to control its size or direction. I notice I’m moving my ears.

Energy enters into a more scientific discussion as well. The theory is this: the difference between a living consciousness and a dead body must be something quantifiable, and not just metaphysical, like a disembodied soul. At minimum, consciousness is information, and information requires energy to exist. So, one of the more legitimate researchers interviewed has the idea of trying to enclose something living in order to determine if this indeed can be measured. Past researchers have tried to do this for dying humans, but this proved problematic for practical as well as ethical reasons. So, Roach naturally has a question for the researcher, which she asks at exactly the wrong time.

I realize I forgot to ask him what kind of organism he’s planning to put inside. The dessert arrives, a massive custard download held vertical by wafer shelving.
“So what goes in it?” I’d been assuming a lab mouse.
“Banana pudding, mostly.”
When I get back home and I look at Nahum’s twenty-five-page “Proposal for Testing the Energetics of Consciousness and Its Physical Foundation,” I will picture a plate of banana pudding in a box.

The intersection of science and what we might now find to be superstition (such as the Spiritualists, or any number of fringe ideas encountered in the search for the soul) is quite interesting. As recently as 100 years ago, it was genuinely believed possible that science may detect the soul or prove the afterlife. Roach points out that electricity and magnetism (and their relationship) were once as disembodied and spooky as ghosts, and it would have been natural to assume that they may interact. And both seemed to be close to witchcraft in their own way. Now, in the era where electronic devices are no better understood, but so ubiquitous as to be unremarkable, it may seem strange to think of Bell and Edison in the same light as seances and “animal magnetism,” but at the time, this wasn’t strange at all. It was the dawning of a new world, and anything could indeed happen.

Another bit really struck me as interesting as well. My kids have had the egg and sperm talk since they were pretty small, as part of our science curriculum. We take it for granted that this is how sexual reproduction takes place. But this was not in fact known until 1875, when a biologist named Oskar Hertwig actually saw egg and sperm meet. Think about that for a moment. It is only in the last 140 years that we actually knew that both male and female gametes were required to make offspring.

It is hard to overstate just how revolutionary this was. As Roach points out, for most of human history, it was believed that the male planted a seed in the female, which grew into offspring. In some cases, it was said that there was a “homunculus,” a tiny human, in semen, which then developed into a child. The female was just fertile ground for the child to grow, not an equal contributor to the formation of the child.

This was a big deal, because the near-universal belief, from Aristotle on down, was that women were congenitally inferior to men, a lesser form of being. Thus, the “greater” could not come from “lesser.” That is, a male child could not result from the inferior female. It would have to come solely from the mother.

The ovum’s main shortcoming as the vessel of humanity was that it derived from the woman, who was in those days (more) universally considered a second-class organism. “If ovism was the true system of reproduction, God was sending us a mixed message,” writes [Clara] Pinto-Correia [in her book, The Ovary of Eve]. “He had locked us inside perfection. And then he had locked perfection inside imperfection.”

In other words, the discovery (again, a mere 140 years ago) that males take half of their genetic material from females changed everything.

Roach doesn’t go into this that deeply, other than to note that a zygote can split into twins up to 14 days after fertilization, raising the question of whether (if you follow the Catholic position on ensoulment) the soul would then have to split in two. Roach does miss the opportunity to ask what happens when a zygote, instead of developing into one or more fetuses, becomes a Hydatidiform Mole, which few, if any, would argue has a soul at all. (See the tale of Anne Hutchinson on my review of The Scarlet Letter for a real life example.) Further discussion would require a post of its own, but I will just say that the claim that science has settled the discussion of ensoulment (by “confirming” that the soul enters at fertilization) is not really supportable by the evidence, despite what certain political groups would have you believe.

I’ll end on a more humorous note. Back in the 1800s, Homeopathy was actually considered a legitimate form of medicine - just like bleeding and other barbaric practices not then known to be harmful. Thus, those who were trained in Homeopathy and then went on to search for proof of the afterlife were not crazy, but more or less within the mainstream. As part of the investigation, Roach reads some of A Dictionary of Practical Materia Medica, the bible for homeopathy at the time (and now, for that matter.) She found the list of symptoms to be amusing, such as “dreams of horses” and “odor before the nose, like herrings or musk.”

But the best was this one: “Agnus castus causes… ‘feeble erections’ and - it almost goes without saying - “great sadness.” (Sorry, her snark about sex makes me laugh every time.)

Throughout, Roach does her best to remain unbiased and open to ideas. She is a skeptic, but realizes that, and does her best to remain objective. Proof is required for her, obviously, but she does not dismiss out of hand plausible ideas and experiments. Her approach is one that I wish more people would adopt when exploring ideas, because some fail to demand verifiable evidence when it comes to testable theories, while others will not listen to any level of proof which contradicts their own hypotheses.

I suppose Mary Roach is probably an acquired taste, but I find her stuff rather amusing, and a good excuse to delve further into ideas, history, and science.
Posted by Diary of an Autodidact at 5:43 PM