Masters of Disaster by Gary Paulsen

This is the third audiobook we listened to on our recent trip. (The others were Fablehaven by Brandon Mull, which we loved, and Northward to the Moon by Polly Horvath, which we didn’t.) On the other hand, Masters of Disaster was downright hilarious, and a worthy choice for a road trip in every possible way. (My seven year old son was still snorting randomly at dinner that night as he remembered the book.) This book was written relatively recently, or I would have wanted it in my own library as a young boy. 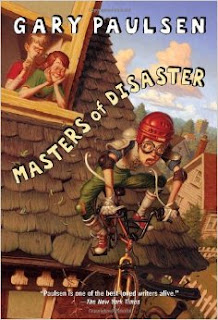 The basic premise is this: three pals, Henry (the ringleader), Riley (the brainy one - and the one I identify with), and Reed (the poor guy who gets to carry out all of Henry’s schemes) embark on a series of crazy adventures, dreamed up by Henry’s imagination. The book started out as a few short stories Paulsen wrote for a magazine, but then grew into a short book. Thus, the book feels episodic. But that is exactly how it should feel. What crazy adventure will Henry think up next? Riding a bike off a third-story roof to try to set a record? Check. Attempting to solve a disappearance by exploring a haunted house? Check. Riding a bull? Check. Hitching a makeshift dog train to a skateboard-sled for a parade? Why not!

Predictably, these do not go exactly well. Okay, maybe that depends on how you define “well.” If you mean “hilarity ensues,” then maybe they do in fact go well. But if you are poor Reed, who cannot manage to stay out of smelly situations, perhaps “well” might be an overstatement.

Reed is rather funny, though. As he careens down the roof - or whatever he happens to be careening down in a particular incident, he can be heard yelling, “Call...9...1...1….” And then, when he has alighted in some odiferous mess or another, he reassuringly informs his friends, “I’m okay.”

“I can’t see because the smell is making my eyes water, but I’m okay. I can’t hear because my ears are packed full, and I’m pretty sure it is leaching into my brain cavity, but I’m okay. And it’s burning my scalp and it feels like my hair is falling out in clumps, but I’m okay. Can you guys, uh, come find me and help me out? Because I don’t mean to worry anyone or complain, but even though I am okay, I am afraid to move right now.”

And, of course, there is the fact that stinky stuff is involved. This does make it right up my kids’ alley, as poop jokes make them laugh. Cow patties? Bat guano? Dirty diapers? Impact with a port-a-potty at high speed? Oh yeah! (They get that from me, I suspect…)

This leads to perhaps the best line of all:

“I found the zombie poop!”

As Henry puts it, “It’s like he has a gift. No matter where we go or what we do, he’s like a compass pointing north when it comes to locating smelly goo."

Obviously, this is not intended to be a particularly deep book, but Paulsen tells a good story. The boys are well characterized, and with good reason. Paulsen (in the hilarious introduction to the book - which he reads himself) notes that all three boys are facets of his own personality. He wishes he was Riley, but realizes that he is usually Reed. (He also suggests that if you try any of the stunts in this book, you should certainly NOT inform the authorities.)

Our previous Paulsen experience has been with the Hatchet series, which is also quite good. The difference is that Hatchet is serious stuff, high adventure with deadly stakes. But Masters of Disaster is something else entirely. I had no idea Paulsen had such a mischievous streak. I am intrigued now to explore some of his other books. In general, they are relatively short, which makes them easy to add to our audiobook list for travel.

Posted by Diary of an Autodidact at 12:49 PM

Email ThisBlogThis!Share to TwitterShare to FacebookShare to Pinterest
Labels: Fiction, humor, Reading With my Kids