It’s been a half a year since this trip, and I finally getting around to writing a blog post about it. Our visit to Arches National Park was part of an extended trip where we saw Capitol Reef National Park, and Canyonlands National Park. This is part of my ongoing series on National Parks and Monuments. We are attempting to visit as many as we can before the kids start leaving home.


In my opinion, the very best thing about Arches is the campground. It is set in the middle of the Devil’s Garden area, right among the “fins” of rock that birth the arches themselves, thus providing a myriad of places for children to play and climb. Unlike Capitol Reef, which does not permit reservations - and is thus perpetually full even during the week - Arches allows one to reserve online. Canyonlands is an easy drive from Arches, so it makes sense to stay at or near Arches or Moab to see both.


One thing that the National Park Service is quick to tell you about Arches is that it has true arches, which are not the same thing as natural bridges. You can see a picture of a natural bridge in my post about Capitol Reef. A natural bridge forms when water undermines an obstacle, allowing the watercourse to go below the bridge. These are pretty cool, of course. But they are not a true arch, which forms when rock falls from underneath the top span.


Utah is full of natural bridges and arches. However, in most places, the arches formed are “blind arches,” with solid rock behind the arch, leaving it open to only one side. These form naturally in many different sandstone formations. Likewise, there are plenty of bridges formed wherever weakness in the rock allows water to get through and carve a channel.


To make a true arch, one needs narrow bands of rock, so that the arch can penetrate all the way to the other side. It is the presence of these “fins,” as they are called, at Arches, that allow literally hundreds of arches to form.


There is some disagreement about exactly how the fins formed, but the prevailing theory is this: sandstone formed millions of years ago at the bottom of a shallow sea that covered what is now the southwestern portion of North America. This much is pretty universally accepted. The second part of the theory is that there was a layer below that of salt, which was deposited during a previous era. This is at least plausible, as there are a number of salt deposits in Utah (and elsewhere in the world) that appear to have been formed this way. Later, water seeped through the sandstone layer and entered the salt, which caused it to swell, cracking the stone. Because of how it was placed, the cracks ended up largely parallel. Later, the salt was dissolved, the sandstone subsided, but remained cracked. Many years later, erosion of the upper deposits exposed the sandstone layer, allowing arches to form on the fins. As I said, this is the dominant theory, but there are some others that attempt to explain the parallel cracking in the sandstone.


(For what it’s worth, the giant sandstone cliffs of Zion National Park are believed to be petrified sand dunes. Thousands of feet tall. Seriously cool.)


In geological time, then, Arches is actually both oldish and young. Oldish in the sense that the deposits were laid down a long time ago - although not as long ago as the rocks in a number of other parks I have visited. Young in the sense that the arches themselves are fleeting features in geological time. One might arise in a mere thousand years, live for a few tens of thousands, the collapse, leaving pillars behind to collapse in their turn. On the scale of life, though, only a few trees like the Bristlecone Pines can even begin to approach the same lifespan, and we humans are a flicker of light that is barely noticed in comparison. And yet, because the arches change, we can observe. There are spots on some of the arches where rockfall has occurred in recent times. Double O Arch lost a spot a couple of years ago, and Landscape Arch, the longest in the park, had a substantial thinning a couple of decades previously. In fact, for Landscape Arch, the rock has thinned enough that it may well fall completely during my lifetime.


Arches is a fairly compact park, although the road is curvy, so it takes a while to drive from one end to the other. Still, like most places, there are only a few things one can see from the road. To really experience the park, one must venture out on foot. The kids, my parents, and I put on between 10 and 15 miles in three days we were there. The best known (and thus most crowded) trails are worth it, but I probably enjoyed the extended hike in Devil’s Garden with my older son even more, as we explored some side trails where we were the only hikers.


Our last evening there, we watched a fantastic thunderstorm pass overhead, with most of the lightning less than a half mile to the northeast. 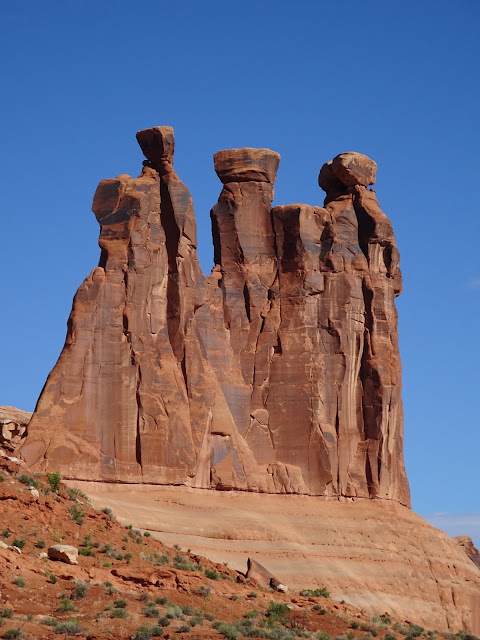 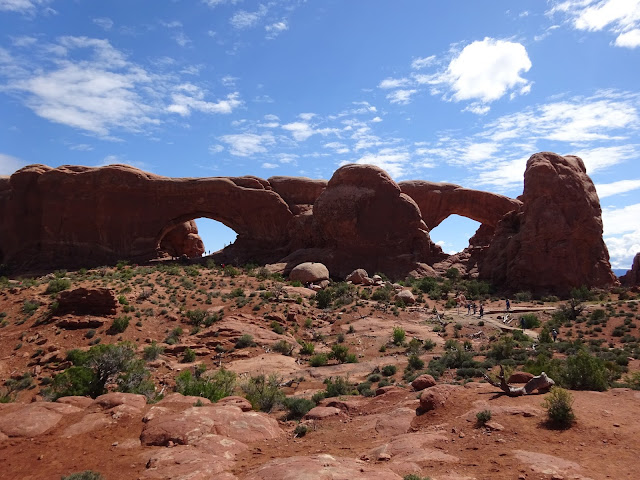 North and South Windows
This reminds me of "Kilroy Was Here." 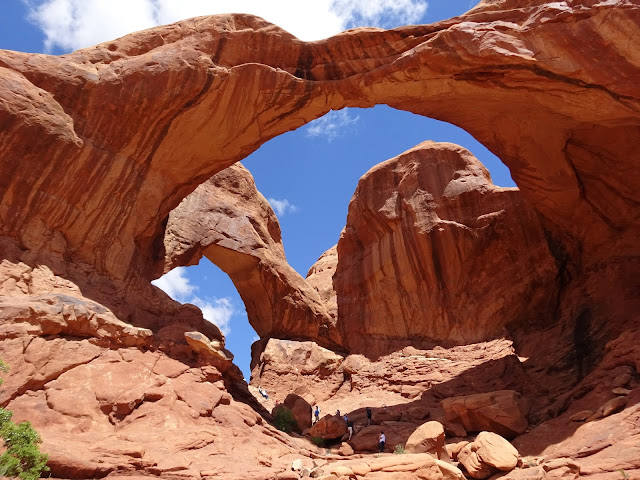 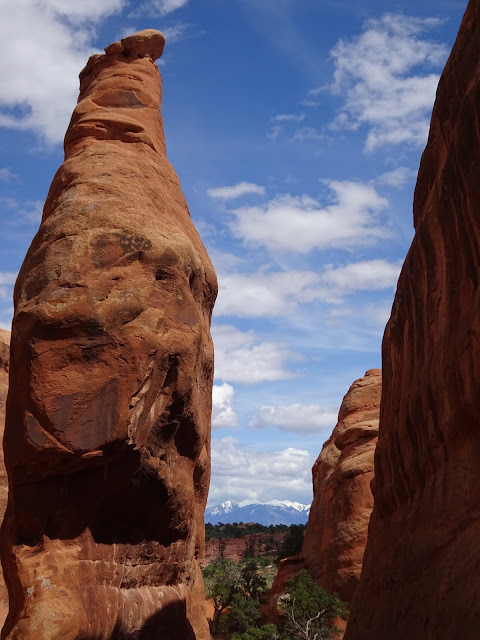 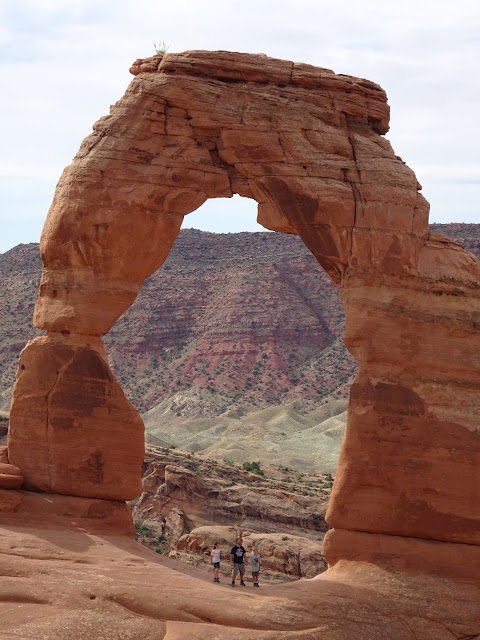 Ted, Cora, and Me in Delicate Arch, the most iconic arch in the park.
Not always appreciated is the 50 foot drop on the other side. 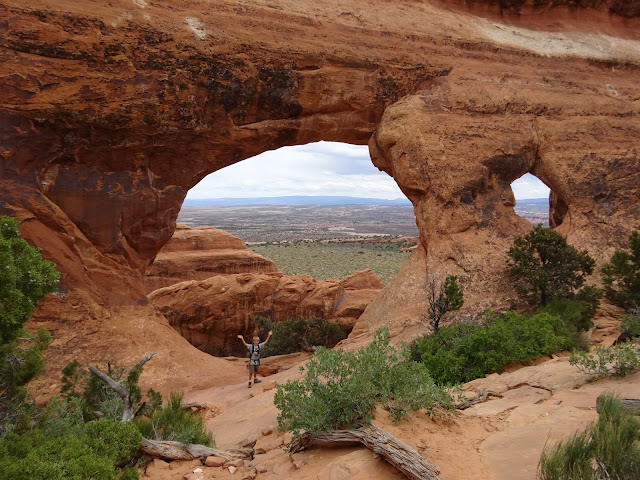 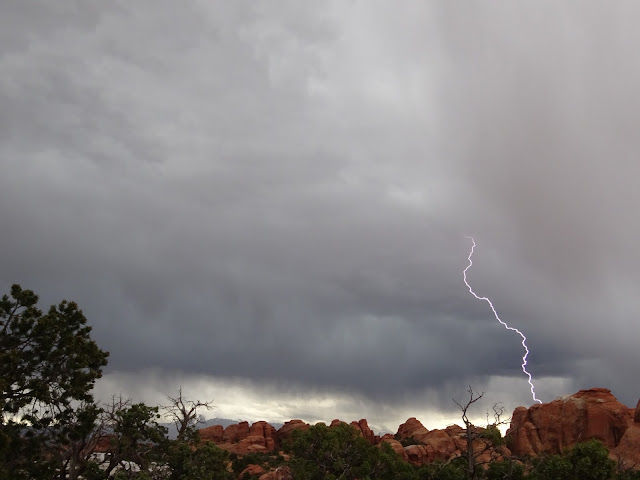 Lightning Strike. This was taken from the doorway of my trailer.
It took several dozen shots to get this one.


For those who care, the vast majority of my pictures were taken by me, with a few taken by my mom or dad so I could be in them. My primary camera is a Sony Cybershot DSC-WX-350 subcompact. Occasionally, I will take a picture with my Nexus 7 tablet. In the future, I will probably get an SLR, but for now, I find something easy to carry and maneuver with a kid hanging on to me is more useful.

Posted by Diary of an Autodidact at 4:12 PM