Roy Moore may or may not be a new name to you, but I have known of him for literally decades. You see, he is practically worshiped in the ultraconservative homeschool circles I grew up in. It is no mystery why.


In my very first religious/political post a number of years ago, I discussed the roots of the Reconstructionist Movement in White Supremacy. It’s a long post, but there is a lot of information in it. Essentially, Christian homeschooling has followed one of two paths. One is the Raymond and Dorothy Moore (no relation to Roy, from what I can tell) path of providing individualized education. This is how and why my own family ended up homeschooling, and I think it is a positive. The other is the Rousas Rushdoony path: Reconstructionism, Culture Wars, and Theocracy.


Roy Moore is a Reconstructionist. Pure and simple. That is important to know.


Roy Moore has been in the news lately because the various women who he flirted with/dated/groped against their will when they were in their teens (and he was in their 30s) are coming forward and blowing his cover.


That Moore did this really isn’t a surprise to those of us who grew up in that subculture. I mean, many of the leaders from Bill Gothard to Doug Phillips (a very close friend of Moore, by the way…) have gotten busted for getting sexual with the young girls. And also, as we know, the subculture itself kind of pushes the young girl, older man dynamic for sexist reasons. See also fellow Gothardism survivor Katherine Brightbill’s LA Times article - and note Matthew and Maranatha Chapman, who were idolized in my wife’s fundie home church…) It is disappointing, but not exactly surprising that Evangelicals will defend this guy. It didn’t stop them from voting for another pussy grabber, after all. I think in particular, white baby boomer Evangelicals are impossibly clueless as to the damage their support of people like Moore has done to the reputation of the Christian faith here in America. But hey, they got their tax cut, right?


But I wanted to discuss a couple of other things about Moore.


Moore came to his hero status because of the Ten Commandments war, of which more later. It was his willingness to defy the law (and the Constitution) to further his view of America as a theocracy that made him popular in Fundamentalist circles.


But I think there was more to it than that. I linked my post above because there is a strong and clear connection between the Culture Wars™ and White Supremacy that continues today.


And Roy Moore is Exhibit A.


Let’s start with Segregation. Alabama, obviously, has a long and sordid history when it comes to this issue. (It also was the site of some of the Civil Rights Movement’s greatest triumphs. The two are definitely related…)


Roy Moore has gone on the record several times in support of Segregation.


The Guardian in 2004 noted that Moore was one of the opponents to a ballot initiative to remove (unconstitutional) language in the state constitution providing for segregated schools.


In an address to a religious conference a few years back, he went on a familiar screed about how God has (allegedly) been removed from government. It’s a familiar bit of red meat to Fundies, of course. But it is what came next that is interesting. He went right from “kicked prayer out of schools” to...wait for it… “created new rights in 1965.”


Anyone familiar with a famous law from that year? How about the Civil Rights Act of 1965. The one that ended Jim Crow and Segregation. You can find it on video starting at about the 11:00 mark.


That’s all bad enough, right? It gets worse.


Last month, on the Scott Beason show, Moore said that “Alabama always stands up for its rights” including “the Civil War conflict.” And yes, there is video.


And also recently, in a rally in Florence, Moore was asked by one of the few African Americans in the audience when he thought America was great. Here is his response:


“I think it was great at the time when families were united — even though we had slavery — they cared for one another…. Our families were strong, our country had a direction.”


Isn’t that interesting. He could just have left the slavery bit out of it. But he didn’t. I think it was intentional, and the middle finger of friendship directed at the African American who asked the question. The answer to “when was America great?” is - to many from Trump on down - “when n----rs knew their place.”


And one more: Moore has made a centerpiece of his campaign against his opponent the fact that Doug Jones has supported the right of NFL players to kneel during the national anthem to protest police brutality.


And said that kneeling is a violation of federal law.


If the law in question were to be taken to compel a certain kind of patriotic act, it is unquestionably unconstitutional. (No one has ever tried to enforce the law in that way - it is widely considered to be a suggestion, not a binding law.)


It isn’t too hard to see what is going on here. “Ungrateful athletes” is the new version of “uppity nigger” used against African American performers who dared to protest against injustice or assert their civil rights.


Moore isn’t even bothering to use a dog whistle. He is openly stating his racism and his belief that America was greater when we enslaved brown people.


Forget the sexual predation (which is bad, don’t get me wrong). The racism should disqualify Roy Moore by itself.


Unfortunately, as I have come to understand in the last couple of years, support for slavery and segregation not only does not disqualify a candidate with white Evangelicals. It is considered by many of them to be a point in the candidate’s favor.


These beliefs are also endemic to the Reconstructionist/Dominionist belief system. See for example Doug Wilson, slavery defender and pedophile protector. And the hate groups that masquerade as “family values.” 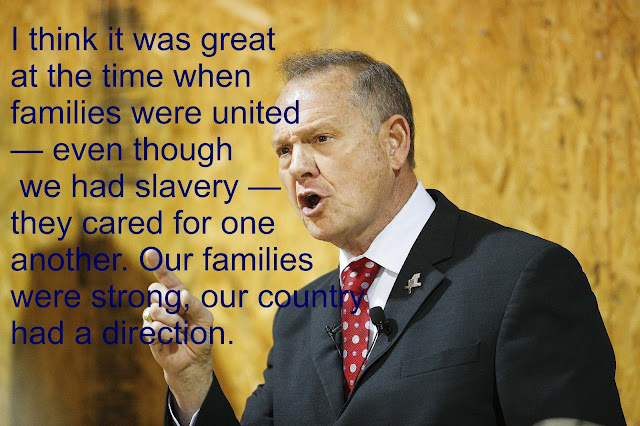 
Just a bit on the Ten Commandments and Same Sex Marriage issues.


The essential problem in both cases is that Roy Moore does not believe that the law is binding on him. If he disagrees with it, too bad. He wins and can do what he wants.


This is why he has been removed from office not once, but twice, by the Judicial ethics board in a very conservative state.


In the first case, he expended public money and space on a gigantic Ten Commandments monument. There was no higher cause here, just a desire to make a statement. A statement that we are a Christian Nation™, dammit, and we need to constantly remind everyone of that. (Particularly those damn Muslims…) Basically, an ego trip for Moore, a phenomenal waste of time and money, with no benefit to anyone.


The second was also a ridiculous ego trip with no benefit to anyone. After the US Supreme Court legalized same sex marriage, Moore took it on himself to defy the ruling.


Mind you, it wasn’t that he would himself refuse to perform weddings. No, he went so far as to order ALL state officials to refuse to follow the federal law. They were literally told that they must defy a federal order or lose their jobs. Even by the standards of Alabama conservatism, this was well over the top. And so he was again removed from the bench.


It’s not really a mystery why he has done both of these things. Both go back to his Reconstructionist beliefs, which is that [the fundamentalist interpretation] of the Bible should be the law of the land. (Ironically, he also rails against the imaginary threat of Sharia Law…) Thus, it doesn’t matter what the actual laws in our nation are. He knows better. And he should be allowed to enforce his own preferences over the actual laws of our nation.


Don’t get me wrong. I believe there is a time and a place for civil disobedience. Rosa Parks comes to mind, as do the thousands of brave men and women who worked on the Underground Railroad. I can even understand abortion protesters (although I think they are on the wrong track for a number of reasons.) If you are trying to help the oppressed, have at it. That is a legitimate reason to disobey a law - in the interest of true justice to those denied it.


But to do so for an ego trip over a monument? Seriously?


Or to assert your control over all the clerks in your state? It really is just a power and ego trip, which is absolutely what Roy Moore is and has always been about.


And that, as much as anything, is why he is utterly unqualified for office.


I was a Republican until 2013, when I realized that the values of the party had changed radically, to the point where they were willing to shut down the government in order to try to force the repeal of the Affordable Care Act. (Because clearly cutting people off from health care was the most pressing concern for our nation…)


I am not the only one - in general, younger people are fleeing the GOP (except for the Alt-Right sorts.) Here is an interesting article by Kurt Bardella, former aide to Darrell Issa and Brietbart staffer. Let’s just say that when you are losing conservatives like this, you have a big problem.


Just to be clear, I have every reason to believe that Roy Moore will be elected. Sadly, in our current political climate, the only thing that matters is whether you have an (R) or a (D) after your name. You can prey on women - or children. You can defend slavery and segregation, slander immigrants and Muslims, take away healthcare from the disabled and impoverished...doesn’t matter one bit.


And it particularly doesn’t matter to white Evangelicals. And I think that the racism and social darwinism are actually a major attraction, whether they will admit this to themselves or not.


This is and remains the part of the story that I believe is most important: the moral suicide of Evangelicalism.

UPDATE December 12, 2017: Apparently I missed the time in 2011 that Moore went on a wingnut radio talk show, and said that getting rid of Constitutional Amendments after #10 would "eliminate many problems." I assume he means ones like these:

Posted by Diary of an Autodidact at 10:37 AM