My Side of the Mountain by Jean Craighead George

Source of book: Audiobook from the library, but I own this as well.

I am unsure whether My Side of the Mountain or Kildee House is my favorite book about wilderness escapism. I read both several times as a kid. 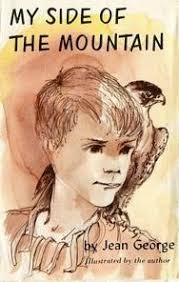 The author's illustrations are still the best.

Let me be clear: I’m a city kid, just with a love for the outdoors. Having lived in the mountains in my teens, I’m still inclined to want to live in a city. I like being close to stuff, having a variety of people around, and not at real risk for getting burnt to a crisp or buried in snow.

But there has always been a part of me that loves the fantasy of living alone in the wilderness, like Sam Gribley.

Jean Craighead George likewise grew up in the city, raised by a naturalist father, who taught her survival skills. (Much greater than my own, I must add. I’m able to stay out of trouble, but I depend on matches, not a flint and steel.) She also had a fantasy of running away, once making it a few hours before returning home. She combined both experiences into this book. Apparently, a publisher first rejected the manuscript on the basis that it would encourage kids to run away. George countered with the argument that it was much safer to run away to the woods than to run to the city. Which may well be true. Nature can be cruel, but humans can be evil.

Because of the author’s background, the details are correct, and realistic, if a bit softened for kids. (Not nearly as much danger of starvation or freezing, perhaps, as might be there even for an experienced woodsman, but it IS a kids’ book.) George creates a fantasy, but not a particularly crazy one.

Hatchet and its successors, by Gary Paulsen, are more gritty - and also realistic. Some of the difference in grit could be explained by the setting. The Catskills, within walking distance of civilization, are far different from the remote reaches of northern Canada.

One thing that struck me this time through is the need that even Sam has for companionship. A falcon is a pretty cool sidekick (although I do better with cats…), but nothing is a real substitute for human company. I am an introvert, and I enjoy my time alone. But I also love to share the wilderness with others. As my kids and friends can attest.

In any event, My Side of the Mountain remains a delightful book, and one that I think will continue to be a classic of children's’ literature.

The audiobook was read by Jeff Woodman, who did a fine enough job. (The name may have helped…)

Posted by Diary of an Autodidact at 8:25 AM

Email ThisBlogThis!Share to TwitterShare to FacebookShare to Pinterest
Labels: Fiction, nature, Reading With my Kids, wildlife