This post is dedicated to the memory of my cousin-in-law Jennifer, who encouraged me to read this book. She succumbed to breast cancer back in October, leaving an aching void in the hearts of many, from her students and former students at Santa Monica High, where she taught English, to her many friends and relatives who loved good books, Disney, cats, and making the world a better place. 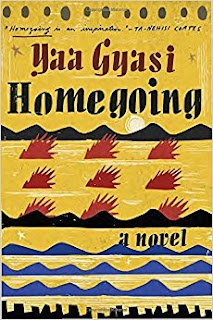 Yaa Gyasi, like one of the characters in this book, was born in Ghana, and immigrated to Alabama. She writes, therefore, as a person who straddles two cultures, and two contrasting experiences of being black in a world still shaped by colonialism and white supremacy.

The book is essentially historical fiction, and covers a couple hundred years, from the days of the African slave trade, through what is roughly the present. The story follows two branches of an African family who take very different journeys over the course of seven generations. Effia is a beautiful young woman, who is married off to an Englishman involved in the slave trade. Her half-sister, Esi, is captured and sold as a slave in America.

On Effia’s branch, the story parallels Ghana’s history, with the various warring tribal kingdoms eventually conquered by the English, independence sought, and eventually gained. Esi’s story is that of African Americans in the United States. Slavery, Convict Leasing, Jim Crow, the Great Migration, the inner city Heroin epidemic, and so on to the present, where white supremacy remains strong, if less open.

A representative of each generation gets a chapter in the book, and that chapter focuses on a pivotal moment in that character’s life. Enough background information is given to connect the stories together, but this is more of a close focus rather than landscape view. The book alternates between branches, so the parallels - and differences - of the corresponding stories are easy to spot. Gyasi doesn’t overdo the parallelism, but it can be seen both in the individuals and in the history that accompanies them.

Homegoing is not an easy book to read. Gyasi does not shy away from the horrors of slavery, the slave trade, warfare, mental illness, drug addiction, or injustice. She also does not excuse Africans for their role in the slave trade, or progressive whites who remain uncomfortable with people of color encroaching on their own families.

There are a few episodes that I want to specifically mention. The first is one set in America at the time of the passage of the Fugitive Slave Act. We tend to forget this one, because it runs counter to the narrative that neo-Confederates of all stripes (and that in practical terms includes anyone trying to keep monuments to Confederate leaders in places of honor, or those who claim the Civil War wasn’t primarily about slavery) want you to believe. No, the South wasn’t content to preserve their slavery-built-and-maintained way of life. They wanted the North to use its police power to seek, capture, and return the enslaved who managed to escape to freedom.

In this particular story, one of the characters happens to be a free-born black married to an escaped slave. However, she is arrested and sent to the South and slavery for her and her unborn child. Yes, this happened. It happened a lot. And therefore, a free black in the North could never rest easy, because his or her freedom was fragile, and could be terminated at any time. We forget this part of our history to our own shame.

I also want to mention an interesting story set in the time of the Great Migration, when millions of blacks left the Jim Crow South looking for better opportunity in the Northeast. (Black Boy (American Hunger) has a semi-autobiographical tale of moving north at this time.) In this story, a character is abandoned by her husband in New York, after he learns he can “pass” as white. He marries a white woman and starts a second family. Recently, DNA testing has become fairly sophisticated and affordable, and a number of friends have taken a test to show where their ancestors (probably) came from. This has led to, shall we say, some interesting revelations. I have seen a few high-profile stories that seem to involve this very thing. A light colored African American “passes” for white, and his or her descendants are shocked - shocked - to find out they have slaves in their ancestry. (Also amusing is a friend’s family who, after years of denial, was forced to admit that there was both French and German in there. This was hilarious because at least one family member cared deeply about this, and was horrified at the result. Who knew?)

In addition to the historical issues, Gyasi also takes an uncomfortable look at the role of religion. After all, it was Christianity that justified the slave trade and slavery itself using its scriptures. The contrast of the traditional African beliefs with the white man’s religion is interesting. Gyasi doesn’t make much of a value judgment. She just presents the uncomfortable truth about both. There is good and bad in each, really, and it isn’t the religion that determines whether a person does good or evil. We just use our religion to justify our behavior, good or evil. Thus, what we whites would call superstition contributes to an unlucky white traveler being burned to death. And Christian “values” are used to support Segregation, and justify beatings and torture of slaves. This is, unfortunately, the truth of history.

There is one religious issue, however, that I think really does need to mentioned. There is an issue with how we Christians tend to talk about forgiveness. I do not blame the teachings of Christ for this, as I believe they have been twisted beyond recognition. But I do believe this is a problem that pervades how we practice our religion. One character notes that the whites talked a lot about forgiveness. “Forgiveness, they shouted, all the while committing their wrongs.” This is how it has been. We talk about grace and forgiveness, and try to shut up the victims of oppression, whether they be of prejudice and police brutality, or of sexual predation by powerful men. (Hello, there, Roy Moore…) I think Gyasi has an interesting take on this. Forgiveness is supposed to take place in the future. After the bad acts have ceased. By talking about forgivness, the focus is taken off of the present - and the evil being done - and redirected to the future, when all will (allegedly) be well. I may have to write about this in a separate post, but the discomfort of American White Evangelicals right now when people like me point out that they have harmed others by voting for the openly white supremacist candidate and for social darwinist policies is due to the fact that they do not want to acknowledge that they have harmed others, repent (in the sense it is used in scripture of changing direction - doing the opposite of the harmful behavior), and ask forgiveness from those they have hurt.

I am glad I read this book, and recommend it highly. As the history teacher character demonstrates at one point, the study of history is difficult because all we have are the stories. And not all of the stories. Because history is generally told by the victors, and the victims have their stories silenced. Gyasi tells some of these other stories in this book - the stories that have been largely silenced or marginalized by the colonialist/white supremacist victors. One of the most influential moments in my own thinking was when I listened to Chimamanda Ngozi Adichie’s TED talk entitled The Danger of a Single Story. It was then that I really understood that it was only relatively recently that these other stories were told. I grew up reading books like Roll of Thunder, Hear My Cry - but that came out in 1976! My parents didn’t read books like that because they didn’t exist. I am thankful that they made sure we did. This is why I encourage my children to read stories from a variety of perspectives - particularly the ones that have been silenced in the past. While this book is a bit too intense for little kids, I think it would be appropriate for teens, who are on the cusp of going out into a world where hate and a white supremacist narrative are newly re-emboldened by their return to political power. And, as the founder of my religion understood, stories are the most powerful way to communicate truth.
Posted by Diary of an Autodidact at 11:55 AM