Ah, how marriage changes a man. Musicals were not exactly my thing, although I concede being raised on The Sound of Music and Fiddler on the Roof. And later, I played in the orchestra in a number of local productions: Hello Dolly, The Music Man, The Secret Garden, My Fair Lady, and Crazy for You. But by then, I had already met my wife, and knew the tunes to Crazy for You because she introduced me to the George and Ira Gershwin songbook - as performed by Ella Fitzgerald and Michael Feinstein. (On separate albums, of course.) And then I played a number of tunes from Rodgers and Hammerstein and Andrew Lloyd Webber and so on. I also saw both Phantom of the Opera and Les Miserables in London during my law school days. So I wasn’t exactly a neophyte, but I didn’t exactly seek out musicals either.

Competing with this, however, was my love for music and for live theater. And, occasionally, a particular production will catch my eye, particularly if it is something my wife (who knows more about musicals than any non-professional I have ever met) finds interesting. Pippin, by Stephen Schwartz and Roger Hirson, was one of these.

The idea of a spoof on the “finding yourself” genre, with a dose of snark about Medieval - and modern - values, sounded interesting by itself. Add to that the fact that it was at our local university, and would likely feature live musicians (it did!) and it sounded like a fun idea. In fact, we brought the kids too. My sons in particular love live theater, and were eager to see this one. They were not disappointed.

I would caution parents, however, that there is some decidedly adult humor in this particular show. Nothing explicit, but older/experienced kids will get the jokes. This isn’t an issue for me - my kids had sex ed early and I am not really into sheltering. (For reasons. I don’t want them to see sex as a taboo.) Your mileage may vary.

The play uses the historical characters of Charlemagne and his sons Pippin and Louis. I say “uses” in the sense that the names and relationships are used. But nothing else has much of anything to do with history. Sure, King Charles is a king who conquered a lot of Europe. And he had sons. And the real life Pippin did lead a revolt against his father. But that is pretty much it.

The story itself is about Pippin (usually called Pepin the Hunchback) and his quest to find himself and his place in the world, his “corner of the sky,” to quote his signature song.

This quest leads the naive Pippin through a variety of adventures. But there is an additional layer. Like The Taming of the Shrew and others, this play uses the framing story of a group of actors putting on the story. Except that in this case, Pippin is both a “new actor” in the role, and someone who isn’t entirely acting. The other actors want Pippin to follow the script and get the big finale, but Pippin wants to actually find himself, and live the life he wants, whether or not it fits the script.

The original production of Pippin on Broadway was directed by Bob Fosse. My wife, who would of course know all about this, dug up a bunch of clips after the play so I could see all of the choreography that was classic Fosse. The costumes, the sets, and the dancing all showed the influence. The opening itself was interesting for that reason. Nothing but white gloves and black lights, followed by the appearance of the actors (sans Pippin) in black costumes with over-the-top hats, revealing them as characters villainous or good, humorous or serious. (The costumes in this production were excellent and almost a character themselves.)

Pippin starts off pursuing his father’s favorite pursuit: war. This is pretty well doomed because Louis is far, far better at that sort of thing than Pippin will ever be. And Pippin is simply horrified by war once he experiences it.

The war scenes were delightfully done. Charlemagne rallying the troops with a battle plan (“War is a Science”) is hilarious, and the ode to gore, “Glory,” is darkly humorous. The predominantly female soldiers were dressed in what can only be described as “Chorus girl meets Roman Soldier” costumes, which were profoundly ludicrous. While they fight - and severed limbs and heads appear - the “Leading Player” (the narrator and master of ceremonies) and two members of the chorus do a little Broadway soft-shoe routine at stage right. The incongruity serves to highlight the sport which Charlemagne and Louis make of bloodshed.

Disgusted, Pippin goes to consult his grandmother, who shares his disdain.

“Men and their wars. They like to raise a flag when they can’t get anything else up.”

She urges him to live in the moment, serving as the Hippie Godmother of the play. Everyone was encouraged to sing along with “No Time At All.” In this production, Miriam Alqausi appropriately hammed it up, ordering the orchestra around, and ignoring the directions from the Leading Player. Pippin then has a series of (highly stylized and choreographed) encounters with beautiful young women, but the meaningless pleasure doesn’t thrill him either.

Pippin then becomes a revolutionary, after seeing the way his father oppresses the peasants. (At this point, one of the actors held a “#fakenews” sign in the background. Pippin himself wears a red trucker hat while a revolutionary…) But after he murders his father, he finds that circumstances make it necessary to do the exact same stuff his daddy did. He then regrets the murder, and wishes it were undone. The Leading Player obliges, and Charlemagne is restored to life - and tells Pippin that patricide had better not happen again.

Disillusioned with revolution, Pippin tries religion, but this too is much like his father, who has an alliance with the Pope to spread Christianity throughout Europe, even if they have to kill millions of infidels to do it. Got to love that whole “by this cross conquer” thing.

Pippin despairs, and collapses in the middle of the road, where he is rescued by a widow, Catherine, who falls in love with the arch of his foot. (My kids found this hilarious.) She takes him home, and does her best to capture him as a husband and assistant on her farm. Pippin is initially put off by the hard work, but warms to her and her snotty son, comforting him when his pet duck dies.

But Pippin eventually moves on, and Catherine sings a song about her loss - a song which is not in the script - giving the Leading Player fits.

The time comes for the big finale, but Pippin refuses to cooperate, choosing a “boring” life of settling down.

I should mention a few of the actors in this particular production. Most of the leads have been in other things around town, and elsewhere. Paul Sosa, as the Leading Player, is a professional and alumnus of CSUB. He has had bit parts on General Hospital and has worked as a showman at Disney and Universal Studios. He owned the stage when he was on it - great dancing, stage presence, and totally unflappable. We went on opening night, and his mic had issues and kept falling off. He was able to carry on unamplified and never missed a beat. That’s skill.

Dakota Nash as Pippin is a bit of a newcomer, but did fine. Anthony Salvador Jauregui III was a convincing Charlemagne. Susannah Vera (Catherine), Crystal Vega (stepmother), and Miriam Alqaisi (grandmother) were solid.

But I was particularly impressed by Judd Johnson as Lewis. The word that comes to mind is “electric.” His stage presence, physical acting, excellent dancing, and connection with the audience was impressive. He could easily carry a bigger role than he had in this play. I hope we see a lot more of him around town - give this kid some main roles!

Pippin runs this Friday, Saturday, and Sunday, so if you are a local Bakersfield resident, go see it. 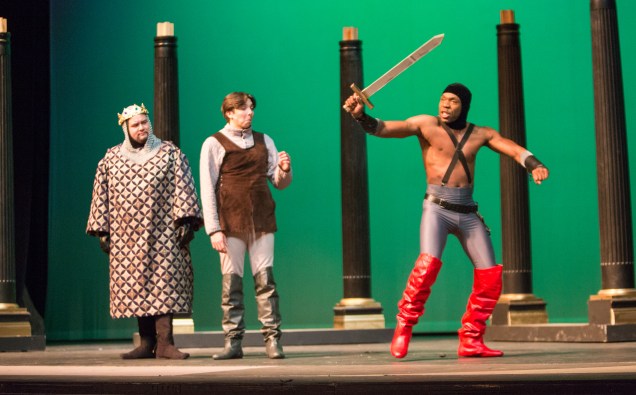 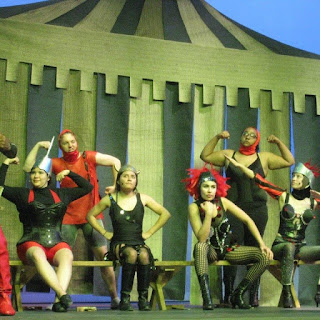 Soldiers before the battle...

One quibble with CSUB: You need to make more photos available! Other local theaters promote their events with high quality pictures, while I had to go hunting to find a mere two. I’d love to give some publicity, but could use some better materials.
Posted by Diary of an Autodidact at 3:47 PM