This month seemed like a good time to read an immigrant story. I believe strongly in the power of stories to shape us and to build empathy and ethical, moral thinking. In light of the revived anti-immigrant sentiment and policies that have and will continue to dominate headlines, I believe it is important to tell these stories, to see things from other perspectives. And to remind ourselves that all of us were “somebody else’s children” once.


The kids and I listened to this during our recent travel to see the Blue Angels fly at China Lake Naval Air Station. It turns out my second daughter has read this book too. (For those counting, that makes a remarkable number of books that she introduced me to the last few years - and several already this year that she read before we listened to them together.) My eldest daughter was interested in this one in part because it is set in the 1930s, an era she is particularly fond of studying.


Although first published in 2000, this book rings even more true today. 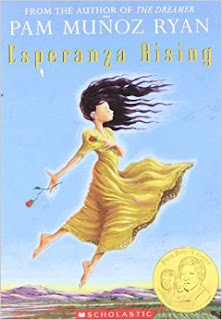 First, let me mention that most of this book takes place in our backyard, in my little spot in the world and in America. Esperanza and her mother come from Mexico to California, stopping in Los Angeles (the city I was born in) on their way to the farms of Kern County. Bakersfield, Arvin, and Lamont, places I know from living here for the last 19 years - where my own kids were born and raised. This is also the setting of Steinbeck’s most famous novel, The Grapes of Wrath, and takes place in the same time frame.


Pam Munoz Ryan chose to make the protagonist, Esperanza, from whose point of view we see the story, a rather atypical immigrant. She is the daughter of a wealthy Mexican landowner, not a peasant. I believe this was an intentional choice, and one calculated to make her more relatable, rather than less, to the typical American child. Sure, they have servants, but they also have a lifestyle largely comparable to that of a middle class American family. Thus, when Esperanza’s life changes catastrophically, she experiences the shocks of poverty much like my kids would.


Esperanza’s father is murdered by bandits early in the story, and the evil step-uncles try to force her mother to marry one of them. When she refuses, he has their home and grapevines burned to the ground. They must flee under cover of darkness to get to America and the promise of a better life than one under the thumb of the powerful.


In order to do so, they must be dependent on the family’s former servants, Alphonso and Hortensia and their teenaged son Miguel, who have relatives who are working in California and can help them get jobs and housing.


California is not, of course, all roses. The field workers live in abject poverty, in camps that are not as nice as those built for the white workers (like the Okies described by Steinbeck). There is an attempt to unionize and strike which ends badly, with many Mexican-Americans who are born citizens being deported along with the rest. The scene involving the deportations is uncanny, as it captures the current atmosphere of disdain for the disruption caused by deportations of those who have known no other life. It also is pertinent for the way that hostility toward Mexicans ultimately does not distinguish between legal, illegal, or native born. It ultimately has always been - and certainly is now - about race. (All it takes is to suggest in a discussion on immigration that we open the borders to those who wish to get a job and better themselves, and you will find REALLY fast that the “illegal v. legal” argument is a red herring. The problem for the vast majority of those who want deportations is “too damn many Mexicans.” Too many “other people’s babies.”)


The worst disaster for Esperanza happens when her mother contracts Valley Fever. If you don’t live here, you may not have heard of it. It’s a fungus that lives in the soil around here (and in a few places in Arizona and Los Angeles) that can infect the lungs. Most people who grew up here have had it as a child without knowing it - for most, it is just a flu-like lung infection which resolves in a week or two. But others get a bad case. I know a few people who have had it as adults, and it wiped them out for months. It can be really bad news, even now that there are drugs which can treat it. Back in the 1930s, you just had to ride it out.


Because Esperanza’s mother is hospitalized for months, Esperanza, just 13 years old, has to work in the fields - as did many other young men and women.


There are a few lines that stood out enough that I was able to remember them even while driving. Both took place early in the book, while Esperanza and her mother are fleeing. First is the comment that Spanish blood meant you didn’t starve. My mother was born and raised in Mexico as a missionary kid, and she used to tell me that there are definite castes in Latin America. Those descended from the Spaniards are essentially white, while those descended from the Native Americans are at best “mestizo,” mixed, and of a lower caste. Racism and Colonialism have left a poisonous residue around the globe…


On a related note is the second line. Esperanza is still struggling to view the lower classes as fully human - she finds them dirty and uncouth - but she sees that an impoverished fellow traveler is generous to the beggars and disabled.  She recalls a saying which she hated - and which Miguel points out the non-rich consider truth: “The rich only look after themselves. The poor look after everyone.” (I am paraphrasing - I couldn’t write and drive…) And this is really pretty true, in my experience growing up in a working class neighborhood. One might even say that this is a stereotypical “fault” of the poor - they tend to spread the wealth around. (Think, as one example, of the NBA stars’ tendency to buy stuff for people back in the old neighborhood. This isn’t a way to keep wealth - but it is generous. Are we really sure the one way is the better one?)


As a final point, I want to return to the issue of the Okies. When the dust bowl sent thousands of destitute migrants from the Great Plains to California, it wasn’t as if there were no workers here already. Rather, the field work had been done mostly by other immigrants: from Mexico, the Philippines, China, and other places. But when the Okies came, there was a strong push to eliminate the non-White workers. Then, as now, there were two key facets that drove this. First, the employers needed to keep the different groups fighting each other, so that they wouldn’t band together and demand higher wages and better conditions. In this last election, make no mistake, the point wasn’t that anything will get better for the white working class. (See, for example, the real life effects of the GOP health care disaster plan, which would have harmed Trump voters.) The point was that by directing the ire of working class whites against the brown skinned workers, those who have really gained over the last several decades as a result of depressed wages didn’t have to worry about unions or wage laws cutting into profits. (I’m a conservative-leaning person, and even I can see how transparent this tactic is.) By the way, this tactic has been used whenever there has been an event which led to unrest in the working class. Blame the blacks, the Mexicans, the Chinese, whatever.


The second point is related: there is an assumption whenever economic conditions lead to unemployment that non-whites should have to give way to whites. The utter lack of empathy for the disruption caused is just astounding to me. I wasn’t raised that way - we understood that all humans have worth - not just the white ones - and it was morally appalling to evict workers from their jobs so that others could have them.


This book was narrated by Trini Alvarado, who did a fine job of capturing the character of Esperanza.


I highly recommend this book, particularly as an antidote to the casual racism and xenophobia sweeping certain groups within our nation. Amid all the dehumanization, casually painting immigrants as “criminals,” “rapists,” and “drug dealers,” it is important to put a human face on, well, human beings. Whether they flee the violence of the drug wars, the grinding of poverty, or just seek a better life for their children, today’s immigrants come here for the very same reasons my ancestors - and probably yours as well - came seeking Life, Liberty and the Pursuit of Happiness. And, as the founder of my religion warned, we turn them away at our eternal peril.

Posted by Diary of an Autodidact at 9:35 PM