Source of book: Audiobook from the library (but I do own a good hardback of this book too)

One of the very first audio books we listened to on our camping adventures was Treasure Island. I figured we were due for some more Stevenson, and Kidnapped was the obvious choice. I have, of course, read the book multiple times, but it has been quite a while since I last read it. I still cannot decide whether I prefer this book or Treasure Island. On the one hand, much of what we have ingrained in our cultural consciousness about pirates, treasure, and indeed a whole genre, comes from Treasure Island. On the other, Kidnapped has its own share of memorable characters and recurring themes of friendship, loyalty, betrayal, and the conflict between competing duties. 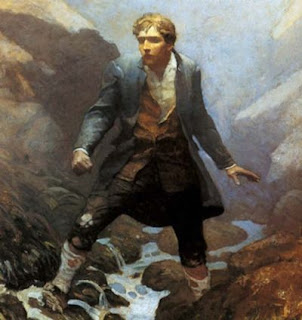 N. C. Wyeth's illustrations are still the best ever.

The plot itself is pretty sparse. Young David Balfour is orphaned, and goes to his estranged uncle to seek his fortune, but is betrayed and sold into slavery. The ship, however, is wrecked in the Hebrides after taking on a mysterious passenger, Allan Breck Stewart, an actual person. Actual events (although not quite historically accurate) then ensue. The king’s agent, Colin Roy Campbell, is murdered by a sniper, and David is suspected of being an accessory - and Allan the shooter. The two of them flee across Scotland in a memorable journey and adventure. Allan must eventually reach France and safety, while David (who isn’t known by name, and thus cannot be connected to the murder except by his connection to Allan) wishes to contact the family lawyer and reclaim his inheritance from his nefarious uncle.

So much for the plot. Other than David, who is purely fictional - his last name was Stevenson’s mother’s maiden name - and the characters connected with David’s family, the major characters are all drawn from history. Kidnapped is thus historical fiction, much in the vein of Sir Walter Scott. In fact, Scott’s Rob Roy is set after the Appin Murder, and mentions both the event and Allan Breck Stewart. Stevenson was inspired by Scott’s novel to write his own.

Certainly Stevenson can write an exciting fight scene. The standoff in the roundhouse is one of the finest, and stands with the parallel scene in Treasure Island as inspiration for so many set pieces which have come afterward, both in print and on the big and small screens.

But what makes this book so satisfying is the friendship between David and Allan, made more realistic by their all too inevitable quarrel, precipitated by exhaustion and fear, and resolved not by apologies but by pity and mutual need. I have long felt that Stevenson captured something true about friendship here, that words often get in the way, and that some things cannot just be resolved by talking it out. Catharsis, such as it is, comes through actions and through a needed rest.

Since it has been a lot of years since I read this, and since I am a much older and experienced man, I did note some things which I did not recall from my previous readings. One of these was the mention of what is essentially a Scottish version of Irish Cream. (Atholl brose.) For those who care, it has whiskey, honey, and cream - but also the liquid from soaking oatmeal in water overnight. I am inclined to believe that I was below drinking age when I last read this, and my knowledge of ardent spirits (to quote Jeeves) wasn’t exactly extensive. It might be fun to try to make my own version of this drink.

Another thing that kind of passed me by was the specifics of the Jacobite Rebellion - and really, the various religious sects mentioned. David is a Covenanter - a Scotch Presbyterian. This theology has so influenced religion in the United States that it is hard to overstate it. I will also note that these beliefs are crucial to a main character in The Heart of Midlothian, which is one of Scott’s great works featuring Scottish characters. The Jacobites, of course, were Catholic, while George II and the English were Anglican. But the subtleties were lost on the young me, of course, particularly the history of religious warfare in Great Britain.

I should also mention the use of Scottish dialect in this book. I did stop the CD and explain a few words to the younger kids. My second daughter loves this book, and is already plenty fluent. I consider this book to be a bit of a gateway drug into the world of Scots. Stevenson intentionally kept the dialect accessible, as he was aiming for a younger audience. From Stevenson, one can then read Sir Walter Scott, which is a bit more difficult. Advanced level readers will tackle Robert Burns.

This audiobook was read by Jim Weiss, a veteran of audiobooks, and a fine reader. I particularly appreciated his distinctive female voices, which seemed to come from a totally different person. He handled the dialect perfectly, and distinguished between various gruff Scots remarkably well. I would definitely recommend him as a narrator.

This book was one of the first classics I read as a kid, and it was one reason that I eventually tackled Scott. My kids too enjoy Stevenson, and I encourage parents to introduce their children to him as well - and at a younger age than they tend to think. Even younger kids will appreciate the adventure and the excellent writing.

Posted by Diary of an Autodidact at 6:18 PM