From the Mixed-up Files of Mrs. Basil E. Frankenweiler by E. L. Konigsburg

This is another book that my second daughter had already read and recommended. Oddly, I wasn’t particularly familiar with either the book or the author, even though this book dates from 1967. Apparently, it was even made into a movie starring Ingrid Bergman. I had no idea. 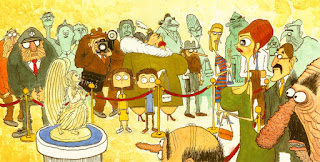 The author illustrated the book as well.
A few puritan sorts complain about the depiction of naked kids (and water sprites) in the fountain...

Elaine Lobl Konigsburg passed on a few years back, but wrote well into her 70s. This is her second book, submitted for publication along with her first. She previously was a teacher, took a hiatus to get her children old enough to go to school, then returned to teaching, art, and writing.

This particular book takes an interesting approach to the “how to get rid of the parents” problem that is common in books for children. After all, if the parents were around, they would (presumably) be of some help in resolving problems, and definitely would put the kibosh on many an exciting adventure. Historically, this was often done by orphaning the protagonists. (The “dead parents” solution.) Although it is definitely still used, it is of less use for stories in a modern setting, where, in contrast to even 100 years ago, parents are highly likely to survive until the kids - and grandkids - are grown. Newer books, therefore, have to opt for other solutions to free up their heroes and heroines. Catherynne Valente and Madeleine L’Engle, among others, transport the children to another dimension, as it were. Gary Paulsen strands his hero in an accident. Others have the parents themselves removed - where they may need rescue. Polly Horvath makes the parents the children, incompetent hippies, who are part of the problem the child must overcome.

Konigsburg, however, puts a fun twist on another venerable device: the child who runs away from home. This, of course, has its genesis in tales as old as time, including many a fairy tale. Konigsburg, however, does not include magic, fairies, or anything really that would not qualify as “realistic.” Other than, of course, the ability of two children to run away and not be discovered.

Twelve year old Claudia is the only girl and oldest child in her family. She feels unappreciated and ordinary, and chafes at looking after the baby of the family and doing housework. Thus, she plots to run away, taking her brother Jamie, mostly because he has saved up more money than she has. The two of them find an unused train pass in the trash, and head for New York City and the Metropolitan Museum of Art. (Where else, right?)

The first part of the book is all about how they get settled in, avoid the guards, and make plans to survive long term. However, a mystery arises. The museum makes a mysterious purchase of a statue for far below market value. It is rumored to be by Michelangelo himself, but its provenance is obscure. The debate rages, and Claudia decides to investigate herself, and try to solve the mystery. Alas, she is far too naive to actually succeed, and eventually decides to go talk to the seller, the titular Mrs. Frankenweiler herself.

The story itself is charming, but I think the stronger part of the book is the way the characters are handled. Konigsburg respects her young protagonists even as she portrays them as possessing average, ordinary traits for their ages. They know and understand a lot about their world, other people, and themselves - something I think adults underestimate in children. (My own parents, I think, understood this better than average.) It is the adults that think children are somehow stupid that cannot see what is really going on. Instead, those few adults who treat the children like full human beings are the ones who actually connect. The anonymous correspondent from the Met who responds to Claudia’s anonymous letter is delightfully non-condescending, particularly under the circumstances. It is this letter which prompts Claudia to seek out Mrs. Frankenweiler, who also refuses to underestimate the children, even as she is able to use her own greater experience and knowledge to outwit them.

The story is largely from Claudia’s point of view (except for the framing story, which is from Mrs. Frankenweiler’s perspective), and it is her inner struggle which is most interesting. She, like all of us, wants to fit in, but also stand out. She doesn’t want to be “just another girl” that her parents take for granted. She wants to feel special in some way, and do something extraordinary. The frustration she feels at being stuck as a kid in an ordinary life is quite recognizable. The grand scheme to run away to a great art museum, and spend the days systematically exploring and learning sounds a bit like heaven to me too, I must admit.

The story went over well with the kids, and I found it enjoyable as well. It deserved its Newbery Medal for the well written characters and psychological perceptiveness. We will have to check out a few more of her books.

This audiobook was read by Jan Miner, who did a fine job.
Posted by Diary of an Autodidact at 10:08 PM