It seems like just yesterday that I wrote my 400th post, aptly entitled “400.” Well, actually, it was just last April, so less than a year. It has been almost exactly two years since I wrote “300.” I have, apparently, spent a good bit of time writing over the last two years.

I started off 400 with an observation that Evangelicalism and the Republican Party had had a rough year. This year has been far worse for both.

For the GOP, they succeeded in elevating the KKK to power in the government. I never thought I would see the day when the most powerful advisor to the leader of the (for now) free world would speak glowingly of a French neo-Nazi novel advocating shooting immigrants on sight. I never thought that the GOP would actually insist on carrying out the ideas of Ayn Rand and Ludwig von Mises. But here we are.

For Evangelicalism, the problem is perhaps even deeper. Over the last decade, I have watched the political and cultural beliefs in the Evangelical church move precisely in line with Fox News commentators and later outright White Nationalist websites like Breitbart. Perfect lockstep. As if following the piper. Not everyone, but enough to change the culture significantly toward less acceptance of outsiders and outright hostility toward Muslims and lower income people. Finally, four of five voted for the White Supremacist candidate, although obviously not everyone did so for racist and xenophobic reasons. However, a shockingly high number of prominent Evangelicals endorsed those evil policies - particularly the opposition to Muslim and Latino immigrants. The few who stood and opposed are now facing some heat for their dissent from the political orthodoxy. (According to the SBC, this is the most complaints they have ever received for any issue in their recorded history.)

Even more disheartening to me is that over the last year, I have had to witness far too many friends and relatives - all of them claiming to be devout Christians - passionately defending the expulsion of immigrants, calling for the end of public benefits for the poor (we don’t feed the squirrels, do we?), quoting stuff from Milo Yiannopoulos (White Supremacist and professional asshole) - and then defending it when called out. I have had to conclude that for many people, “values” means political values, not moral and ethical values. Tribal identification trumps (sorry) identification with the teachings of Christ.

This is the first time I have gone public with this news, and I am not going to give details at this time. (And I am never going to name names.) But the bottom line is that I have gone through a messy divorce from our longtime church, and from Evangelicalism as a whole. And it has been, as I have experienced it, because only certain viewpoints are welcome. Politics from the Right - even hate groups - are acceptable, but reminding people that you cannot claim to follow Christ and reject immigrants and refugees (as Russell Moore did) is not. Along with this expectation of political conformity has come creeping Cultural Fundamentalism, and I found myself spending too much time deprogramming my kids from gender essentialism, anti-LGBT hate, and the White Evangelical Industrial Persecution Complex™ (to use Rachel Held Evans’ excellent term.) At some point, you just ask yourself why you are putting yourself through that. (The answer, though, is that community with the many lovely people in our churches is worthwhile - that’s why I am working hard to maintain ties with those who have not swallowed the kool-aid.) It doesn’t seem to be just our former church either. I’m sure there are exceptions (and I’m glad there are) but particularly in conservative areas, it is increasingly hard to find an Evangelical church that isn’t into the culture wars and strongly aligned with a certain political party.

So this has been a disorienting few years. I have had to leave both my former political party and my theological tradition because of conscience. And no, it isn’t me. It’s you. Both of you. You’ve changed. This is neither the political party nor the faith tradition I was raised in.

One thing that hasn’t changed since I started this blog is that I continue to meet and converse with some amazing people. Even this week, there have been conversations (outside of the blog) about music, philosophy, economics, and other topics that have been fascinating.

As far as the reason I started this blog - books - it has again been a great year. In 2016, the family and I were able to see a lot of live theater, including a week at the Utah Shakespeare Festival. Say what you like about babies (and I love them too), there is something lovely about older kids you can share experiences of this sort with. We also listened to a lot of audiobooks together on our adventures. We hiked over 150 miles in 2016, saw Crater Lake for the first time, and went to see the Dodgers play live with my brother and nephew. It has been a good and a fun year in many ways.

I also have my first teenager now, and will have another this year. If the other pressing issues ever leave me with some time, I would love to write a post about how underrated teens are.

There are so many things I hope to read this year - my bookshelves overflow. I have plans to go see the solar eclipse this August - and some new places within the National Park system to see along the way. And there are many things I think I need to write about, starting with Social Darwinism, which has become the official political doctrine of both the GOP and the Religious Right. I also hope to write a series unpacking the issues in health care, and showing that there are no easy answers - the “easy” ones are just unethical. And finally, given that both the GOP and much of white Evangelicalism have seemingly embraced “alternative facts,” I hope to write about that, and why a belief in Absolute Authority is not the same thing as a belief in Absolute Truth. Lots to think about, and lots to write.

But, as always, as Tennyson so aptly put it in “Ulysses”:

Come, my friends,
'T is not too late to seek a newer world.
Push off, and sitting well in order smite
The sounding furrows; for my purpose holds
To sail beyond the sunset, and the baths
Of all the western stars, until I die.
It may be that the gulfs will wash us down:
It may be we shall touch the Happy Isles,
And see the great Achilles, whom we knew.
Tho' much is taken, much abides; and tho'
We are not now that strength which in old days
Moved earth and heaven, that which we are, we are;
One equal temper of heroic hearts,
Made weak by time and fate, but strong in will
To strive, to seek, to find, and not to yield. 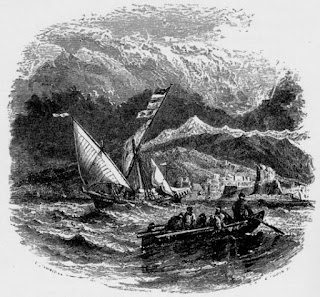 Illustration for Tennyson's "Ulysses" by Clarkson Stanfield, 1857
Posted by Diary of an Autodidact at 6:35 PM