Last night, the lovely Amanda and I went to see Hidden Figures. For those who don’t know, this film tells the story of three pioneering African American women who worked for NASA during the space race.


Mary Jackson, aerospace engineer, in an era when neither women nor blacks were heard of in that position.


Dorothy Vaughan, mathematician and computer programer. And also the first African American woman to be a supervisor at NASA, and later the first to be head of personnel.


Katherine Johnson, who merely calculated the flight path for Alan Shepherd’s spaceflight, calculated John Glenn’s orbit and reentry, worked on the Apollo and Space Shuttle programs, co-authored 26 scientific papers, and now has a facility at NASA named after her for her decades of brilliant contributions to the space program. Basically as badass as they come.


These names really should be better known than they are. Kudos to NASA for doing its part to recognize them. 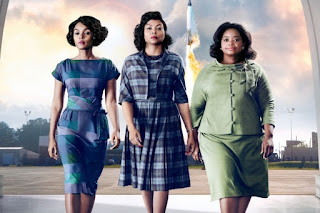 
We tend to forget it these days, but in those pre-electronics years, all the math for space flight - and it is a LOT - was done by human “computers.” And many of these computers were women. (This didn’t just apply to flight, much of science was conducted this way. See How Old Is The Universe? for a bit more about women who contributed behind the scenes but never got credit.)


Some of these women - an entire unit at NASA in fact - were African American. These were the days of Jim Crow, so they had segregated bathrooms and so on, a fact which plays a major role in the film.


I don’t want to spoil the film (although history is history…), so I won’t go into too much further detail. This is a great film, though, and tells the story well. I was impressed that the focus remained firmly on the African American women, and didn’t become all about the whites who helped them.


A few things really struck me. One was the scene where John Glenn refuses to fly unless Katherine Johnson personally calculates his landing trajectory. This sounded a bit Hollywood, so I looked it up. Well blow me to Bermuda! It really happened. And Glenn really was as shockingly progressive as the film portrays him. Fraternizing with the “coloreds” indeed! (Glenn Powell really nailed the portrayal of Glenn too. Nice casting.)

I also found the issue that arises between Katherine Johnson and Paul Stafford (portrayed by Jim Parsons). I have no idea exactly how this went in real life, but in the movie, Katherine stubbornly affixes her name as co-author of each report she types up, featuring work she does, but Paul insists that only his name be on there, because “computers don’t author reports.” Again, Hollywood license? Maybe. Or not. What I do know is that this sort of thing goes on all the time in the real world. Woman does work and comes up with ideas, man gets credit. My wife was specifically trained, so to speak, on how to play the nurse/doctor game. Nurse comes up with an idea, but must sell it to the doctor in a way that he thinks it is his idea, and can thus take credit for it. My wife’s generation, though, has been saying screw it to this game, and is more likely to insist on interacting as equals in different roles, not as superior and inferior. (Nurses work for the hospital, not doctors…) So I fully believe that Katherine Johnson had to put up with this from the white males on her team. In what had to have been a satisfying development, Johnson would go on to co-author a good many reports and scientific papers - and get credit for them.


Another powerful scene was where Al Harrison (Kevin Costner) truly realizes the cost that segregation is having on his team - Katherine must walk a half mile each way to relieve herself in the “colored” restroom - he goes ballistic, and violently destroys the sign on the segregated restroom, and proclaims that anyone can use any restroom in any building, white or black. His closing line is great:


At NASA, we all pee the same color.


The other line that was amazing and profound was this: Dorothy Vaughan meets Vivian Mitchell, who is some mucky-muck in Personnel in the newly desegregated bathroom. The two of them have a history, because Vaughan has been doing the work of supervising the “colored computer” unit, but has been refused a promotion. Mitchell claims it is just “how NASA works,” but everyone knows that the problem is that Vaughan is black.


After a bit of an awkward exchange in the bathroom, Mitchell says (more or less), “You know I never held any ill will toward you ladies.”


Vaughan hesitates, then softly says, “I know...I know that’s what you want to think.”


I can’t get this line out of my mind.


“I know...I know that’s what you want to think.”
Damn, that’s a good line. It absolutely gets to the heart of the problem. Many people don’t really want to think about the impact their actions or inactions have on people of color. What is most important is that they don’t feel discomfort or have to look at themselves honestly. Mitchell wants to preserve her own sense that she is a good person, without having to actually stick her neck out and advocate for justice for Vaughan.


This perhaps is why I will be making sure my kids see this movie at some point. They need to see and understand that positive change requires more than positive feelings. It requires action. Each of the three women has to at some point demand justice for themselves - and they make the white people in power VERY uncomfortable when they do so. It also requires that those of us who wish to be allies for people of color cannot simply content ourselves by saying that we personally would never discriminate. We have to be like Harrison and refuse to allow segregation, consequences be damned. We have to be like the (unnamed) judge who goes against Virginia law to side with Brown v. Board of Education to allow Mary Jackson to attend engineering classes. We have to be like John Glenn and actively and expressly side with our brown skinned brothers and sisters - and yes sometimes that means politically too - no matter how much disapproval we get from our own tribe.


Otherwise, we are just staying in our little bubble, thinking a little good intention will paper over action and inaction that does evil. No, we’re not racist. Right?


It’s very encouraging to me that Hidden Figures is doing well at the box office. Yes, it is well cast and well acted. (Taraji Henson, Janelle Monae, and Octavia Spencer are all outstanding.) But the story is powerful, and comes at a time where there has been an open revival of White Supremacy, and far too many people feel free to say openly racist things. This film is a reminder that, jackasses like Steve King notwithstanding, it wasn’t just white people who have contributed to the world. They just haven’t gotten the degree of credit they deserve. I am thrilled that this story is finding an audience.


Go see this film. Take your children (it has no gratuitous sex, violence, or language, actually). Let them see what our nation was like not very long ago, so they can understand what an appeal to return to the past really means for many Americans. This film should also encourage our daughters, and children of color, to aspire to careers in math and science. These women were nothing short of amazing, and without them, the space race would likely have played out very differently. Our society is better off when we encourage the contributions of all, regardless of gender, race, national origin, or religion. We must never forget that, and we must constantly fight against the ideas that seek to deny this truth.

Update: I took the kids to see this. They loved it. We had some great conversations afterward.

Posted by Diary of an Autodidact at 1:32 PM