The play is most familiar today in the form of a movie starring Cary Grant. I’ll confess, I have never seen the movie version, even though we own it. This was my first experience. My wife and I also took our older daughters, the younger of which is our macabre child. (She tends to rate plays by the body counts, rather than the laughs. So, Hamlet? Good. Romeo and Juliet? Meh. Too much kissing.) She laughed the whole way through, and afterward opined that she needed a window seat. That was definitely a wicked glint in her eye.

So, for those who, like me, are not familiar with the plot, Mortimer, a young movie critic, lives with his benignly insane brother Teddy (who believes he is Teddy Roosevelt) and his two prim and proper aunts, Abby and Martha. To the outside world, they are two sweet spinsters, hospitable enough to welcome even those with differing political views, and appropriately horrified at the very idea of theater. (The opening scene with the minister, where they talk about how much Mortimer hates the theater, because he writes such negative reviews is quite amusing.)

But it turns out that the aunts have a secret. Mortimer, looking for some papers, opens the window seat, and discovers a dead body. He assumes that Teddy, in a fit of insanity, killed him. But when he tells the aunts, they sweetly inform him that they know all about it. In fact, they killed him - poisoned him with tainted elderberry wine. The dissonance between Mortimer’s shock and horror and the aunt’s cheery explanation of just how many they have killed already is what drives much of the play. Well, until Mortimer’s black sheep brother Jonathan - malevolent and homicidal himself - shows up with a plastic surgeon accomplice (patterned after the real life mob doctor Joseph P. Moran). And a dead body of his own, which the aunts are not about to let be buried with the rest.

A running joke in the play is that Jonathan has had his face altered to hide his identity - and now he looks like Boris Karloff, as everyone is quick to point out. Naturally, the part was in fact played by Boris Karloff both on stage and in the film.

And all poor Mortimer wanted was to marry Elaine, the sexually ravenous daughter of the minister. He can’t explain this to Elaine, and his family just wants him to forget about it and pretend all this is normal. Which for them, it is, I suppose. 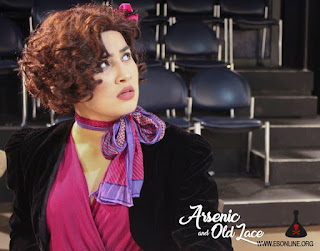 It is easy to forget sometimes just how sharp and naughty comedy was in the 1930s and 40s. Elaine is definitely not the ideal virginal girl of the 1950s stereotype - she makes some witty references to the choir loft - and she is pretty hot and bothered until she ends up puzzled at Mortimer’s sudden change toward her. Evelyn Torres plays the part of Elaine in this production. I don’t think I have seen her in anything else, but she had electric stage presence in this limited part. She is involved behind the scenes at TES, according to her bio. 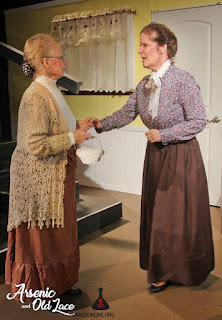 I thought the casting for the aunts was excellent. Barbara Gagnon (Abby) and Julie Gaines (Martha) are veteran actors who have been in a number of productions around town. I think this is the first one I have seen where they had lead parts, and they were outstanding. The sweet innocence, deadpanned without the slightest self consciousness, as if murdering lonely old men was much the same as planning the potluck at the church picnic.

I want to give special mention, however, to Ryan Lee, as Mortimer. Last year, he was Tom in The Glass Menagerie, and did a fine job in that role. Mortimer is both the straight man in a comedy and a man placed in a world so surreal he cannot find his bearings. He must be funny without knowing that he is funny, and exaggerated yet realistic. Lee pulls this off with aplomb. From that first big scene when he discovers the body, walking away several steps before it registers, his face and gestures are expressive, bringing his own inner struggle against his fear he too is going insane to the surface. Lee is quite young, a student at the local junior college, but he shows a lot of skill and promise.

I am clearly not Mortimer, as I had a grand evening at the theater. I am a big fan of the local art scene, and The Empty Space is well worth supporting. This show runs through Saturday, February 11, 2017. Esonline.org for reservations and information.
Posted by Diary of an Autodidact at 7:59 PM