A decade or so ago, there was a big scandal in journalism when it came to light that New York Times writer Jayson Blair had fabricated quotes and people and even travel in his stories. A few years before that, a similar incident involving The New Republic’s Stephen Glass caused a stir. In both cases, the problem wasn’t just the fabrication, but the presenting of what was essentially fiction as if it were fact.

Despite the pearl clutching over the supposedly dismal state of ethics in our modern world, these sorts of scandals are nothing new. In fact, there are many known cases of similar cheating throughout the history of journalism. I also strongly suspect that there are many, many more that will never come to light, simply because it was much easier to invent sources before ease of travel and the internet made fact checking possible.

Joseph Mitchell is one of those cases from the past that did get caught. A writer for The New Yorker for most of his career, Mitchell was known for his long-form profiles of people and interesting places and traditions in New York City. Alas, it turned out that a few of his articles suffered from a certain lack of truthfulness. In particular, Old Mr. Flood was, as he confessed, not about a real person, but an amalgam of several people he knew. That said, most of Mitchell’s writing was actually truthful, but he succumbed to the temptation to embellish.

McSorley’s Wonderful Saloon was Mitchell’s first book, and was a collection of fiction and non-fiction works originally published in The New Yorker during the late 1930s and early 1940s. It is difficult to find the original work these days, as it is out of print. However, an expanded edition of it is available in Up In The Old Hotel, which collects most of Mitchell’s works, including Old Mr. Flood. This is the version that I read. I didn’t read the other books in this book, just McSorley’s.

There are a total of 20 non-fiction articles and 7 short stories in this book, and they cover a fascinating range of topics. The title article is about an old-school saloon in The Bowery, with a colorful history and interesting traditions. Other subjects include Joe Gould, a bohemian writer who may or may not have ever written anything, child prodigy Philippa Schuyler, New York’s Gypsy population, a terrapin farm in Georgia, clam fishing off of Long Island, a man devoted to the abolition of swearing, the Deaf Club, Beefsteak parties, and a host of other eccentrics.

The fictional stories can be grouped into two parts. The first is a set of four which share the theme of alcohol and alcoholism. The second consists of three humorous works set in the South.

It’s impossible to cover all the ground which Mitchell does in this book, so I’ll just hit a few highlights. Mitchell’s writing is evocative. He really draws out the earthy feeling of the places he writes about. The grime and and poverty is apparent, but neither glorified nor disdained. Even his less sympathetic subjects are treated with dignity and respect. Mitchell also tries to avoid making judgments, preferring to let his subjects talk, and allowing the reader to draw conclusions. He is able to see the nuances and complexities inherent in humanity.

In the introduction (written in 1992), Mitchell notes that he sees a graveyard humor in the stories now that he has gone back and re-read them. I agree with this assessment, and approve.

Just to mention a few things, the title story is intriguing. McSorley’s still exists, but it has changed. In 1970, for example, it was forced to allow women inside. When Mitchell wrote about it in 1940, it was still steadfastly resisting gender integration. In 2011, a much more serious indignity befell the tavern: the health department insisted it get rid of its resident cat. On the other hand, the memorabilia on the walls dates back to 1911. The history is pretty impressive. e.e. cummings wrote a poem about it, Abraham Lincoln (and Grant and T. R. too) patronized it, Woodie Guthrie and Hunter S. Thompson were also among its visitors. 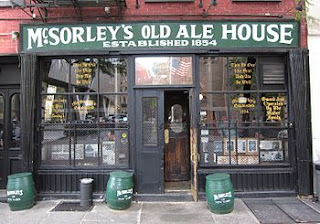 Particularly interesting to me is that the tavern stayed open during Prohibition. It was never raided, probably because it was a favorite of several Tammany Hall politicians and police officials.

According to regulars, Bill McSorley (son of the original founder) used to close the bar when he got tired in the evening, and if people were slow to finish their drinks, he would say, “Now see here, gents! I’m under no obligoddamnation to stand here all night while you hold on to them drinks.”

That, I must say, is an impressive and hilarious use of profanity.

In the article about Calypso singers, he quotes a lyric that sounded rather familiar:

If you want to be happy and live a king’s life,
Never make a pretty woman your wife.
That’s from a logical point of view,
Always love a woman uglier than you.

The lyrics are slightly different in the Jimmy Soul version from 1963, but it is the same song.

One last bit to mention: one of the short stories is a fictional account of a small town KKK. Set in a small town in North Carolina (given the name of Stonewall, and supposedly in Black Ankle County, which is actually a town), this story, “The Downfall of Fascism In Black Ankle County,” it was written in 1939, when Hitler and Il Duce were in the news, but the war hadn’t yet broken out. Certainly the horrors of the holocaust were still in the future. The story itself is set in the 20s, when the Klan had its renaissance.

Anyway, in this story, where it is a given that all of the kids in town have seen The Birth of a Nation (pretty much propaganda for the KKK - and not to be confused with the modern movie of the same name), a failed salesman and a puritanical fanatic team up to found a local chapter of the KKK. Because this is a humorous story, the saga ends badly and embarrassingly.

But what happens in between is interesting. The teaming up of someone under economic stress with a prude is no accident, and is pretty typical for racist organizations then and now.

And how interesting is this? Mitchell’s narrator (who may be a stand-in for himself) quotes a KKK tract which explains what the KKK stands for:

“The Ku Klux Klan stands on a platform of 100-per-cent Americanism, white supremacy in the South, deportation of aliens, purity of womanhood, and eradication of the chain store.”

Hey, it doesn’t take much tweaking to make this fit the election of 2016. Actually, just about anyone who has explored the rhetoric of the KKK in the past (and present) didn’t have to look it up. We already knew that a certain candidate was openly adopting the KKK platform and rhetoric.

You can see the elements here. Gender roles and female purity. Kick out the immigrants. Make it harder for African Americans to vote. America first. Tariffs. No globalization.

It gets better, too. These small-time KKK guys in the story did the usual of burning crosses in front of black churches, but they also had other targets. A blacksmith who had a reputation for profanity. A mentally disabled woman who had illegitimate children. A Jewish merchant. A black businessman.

Basically, they went after those who couldn’t defend themselves. The whole caper came to an end, finally, when they targeted a local moonshiner who competed with one of their own. When someone finally fought back (however incompetently - these are not brilliant bootleggers…) they packed it in. Because the KKK is about bullying those who have less power, and always has been.

For the most part, Mitchell is content in the non-fiction works to just report, not comment. People who are quoted sometimes say horrid, racist things. In this story, which is fictional, but realistic in its details, he takes more of a side, against fascism, against the KKK, and against racism.

This whole book is interesting, with a panoply of great characters, most of them real people.

A final note, Mitchell’s life took an interesting turn later. One of the subjects of this collection, the eccentric Joe Gould, was revisited by Mitchell 20 years later. In that profile (which I haven’t read), apparently Mitchell concluded that Gould suffered from writer’s block, and had never written the work he claimed to be working on.

Mitchell himself would go on to develop writer’s block too, and didn’t write anything of note after the early 1960s. However, he would still faithfully go to his office at the New Yorker - for the next few decades. For whatever reason, that magazine kept him on despite his lack of production. Definitely a peculiar ending to a distinguished yet flawed career. 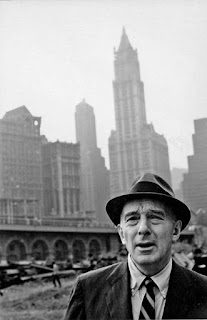 Posted by Diary of an Autodidact at 12:18 PM