The Hitchhiker's Guide to the Galaxy by Douglas Adams

Source of book: Audiobook from the library (but I do own all the Hitchhiker’s Guide books)


If I were Supreme Lifetime Dictator of the Earth™ I would enact the following rule:


All audiobooks henceforth shall be read by Stephen Fry.


Okay, there can be a few exceptions. Neil Gaiman should read his own books.  And Mary Roach too. I’m on the fence about P. G. Wodehouse. Jonathan Cecil is so very, very good, but Fry is the ultimate embodiment of Jeeves… 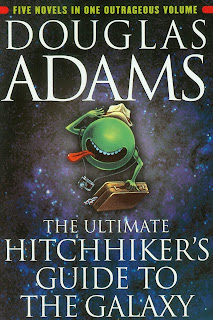 So anyway, a friend who shares my love for Douglas Adams informed me that Stephen Fry had indeed narrated a version of The Hitchhiker’s Guide to the Galaxy, I knew we had to listen to it. My wife, however, was the one who actually pulled the trigger and picked it up.


I first discovered this book when I was fairly young. My dad had it, and I borrowed it. No, I didn’t ask permission, and may not have gotten it had I done so. But I fell in love, and never regretted reading it. (It was, if I recall, the first book I ever read that had a few swear words in it. On a related note, I still think swearing sounds best in a British accent…)


It should come as no surprise, therefore, that we listened to it as a family - or that my kids thought it was hilarious. Actually, about the only surprise was just how many of the more sophisticated jokes drew laughs from my boys (ages 10 and 8.) They are growing up to be the right sort of young men, clearly.


This is my fourth or fifth time through this book, so I knew it pretty well already. But I was surprised at how incredibly well this book has aged. In fact, there were several times I realized that it could have been written this year - the issues are that timeless. Police brutality? Yep. Narcissistic celebrity presidential candidates? Oh yes. Artificial Intelligence with personality? Still the best portrayal I have read. Conspiracy theories about the age of the earth? You bet. Bureaucratic boondoggles? Yes, and this version includes bad poetry. Philosophy, hucksterism, probability, modern poetry, sentient mice, tea...it’s all there. And don’t forget the bad puns and deliciously zany lines.


For those not familiar with the plot, Arthur Dent, a not-terribly-bright 30-something Englishman finds his world turned upside down one day. First, it appears that his house will be demolished to make way for a bypass, then his friend Ford Prefect turns out to be an alien from near Betelgeuse, and to cap things off, the Vogons demolish Earth to make way for an interstellar bypass. That’s enough to ruin everyone’s day.


So Arthur and Ford end up hitchhiking across the galaxy. Well, more or less. They get picked up by Zaphod Beeblebrox (who had an extra head and arm added to his already fabulous body), the president of the galaxy, who has just stolen a top-secret spaceship, and Trillian, formerly Trisha McMillan, the only other surviving human in the universe. And then comes Marvin, the depressed android, and a magical spaceship which runs on improbability, and the a mythical planet where custom planets were manufactured for the ultra-rich, and...well just read the book already.


And, believe it or not, you will learn the answer to the ultimate question of Life, the Universe, and Everything.


I simply must quote a few lines, however. The very opening of the book sets the tone - and my kids laughed loudly at it.


Far out in the uncharted backwaters of the unfashionable end of the Western Spiral Arm of the Galaxy lies a small unregarded yellow sun.
Orbiting this at a distance of roughly ninety-eight million miles is an utterly insignificant little blue-green planet whose ape-descended life forms are so amazingly primitive that they still think digital watches are a pretty neat idea.
This planet has - or rather had - a problem, which was this: most of the people living on it were unhappy for pretty much of the time. Many solutions were suggested for this problem, but most of these were largely concerned with the movements of small green pieces of paper, which is odd because on the whole it wasn’t the small green pieces of paper that were unhappy.
And so the problem remained; lots of people were mean, and most of them were miserable, even the ones with digital watches.


The digital watches are a recurring idea, incidentally.


There are of course many problems connected with life, of which some of the most popular are Why are people born? Why do they die? Why do they want to spend so much of the intervening time wearing digital watches?


The next line is better in context, but it would take too long to explain all of it. Nevertheless, it is representative of the unexpected zaniness of the plot twists.


Curiously enough, the only thing that went through the mind of the bowl of petunias as it fell was Oh no, not again. Many people have speculated that if we knew exactly why the bowl of petunias had thought that we would know a lot more about the nature of the Universe than we do now.


Speaking of philosophical questions, Adams skewers modern philosophy in hilarious fashion. As the computer Deep Thought prepares to calculate the answer to the ultimate question, a couple of Philosophers break in, and demand that their union jobs be protected.


“Who are you?” said Lunkwill, rising angrily from his seat. “What do you want?”
“I am Majikthise!” announced the older one.
“And I demand that I am Vroomfondel!” shouted the younger one.
Majikthise turned on Vroomfondel. “It’s all right,” he explained angrily, “you don’t need to demand that.”
“All right!” bawled Vroomfondel, banging on a nearby desk. “I am Vroomfondel, and that is not a demand, that is a solid fact! What we demand is solid facts!”
“No, we don’t!” exclaimed Majikthise in irritation. “That is precisely what we don’t demand.”
Scarcely pausing for breath, Vroomfondel shouted, “We don’t demand solid facts! What we demand is a total absence of solid facts. I demand that I may or may not be Vroomfondel!”


The bit involving the cops is pretty funny too. Particularly since British police officers are, but near-universal agreement, the nicest in the world. (Not that I have much experience, though. My visit to England was notable for the absence of any brushes with the law.)


“Now see here, guy,” said the voice, “you’re not dealing with any dumb two-bit trigger-pumping morons with low hairlines, little piggy eyes and no conversation, we’re a couple of caring guys that you’d quite like if you met us socially! I don’t go around gratuitously shooting people and then bragging about it afterward in seedy space-ranger bars, like some cops I could mention! I go around shooting people gratuitously and then I agonize about it afterward for hours to my girlfriend!”
“And I write novels!” chimed in the other cop. “Though I haven’t had any of them published yet, so I better warn you, I’m in a meeeean mood!”


“Because,” shouted the cop, “it’s going to be very intelligent, and quite interesting and humane! Now - either you all give yourselves up now and let us beat you up a bit, though not very much of course because we are firmly opposed to needless violence, or we blow up this entire planet and possibly one or two others we noticed on our way out of here!”
“But that’s crazy!” cried Trillian. “You wouldn’t do that!”
“Oh yes, we could,” shouted the cop, “wouldn’t we?” he asked the other one.
“Oh yes, we’d have to, no question,” the other one called back.
“But why?” demanded Trillian.
“Because there are some things you have to do even if you are an enlightened liberal cop who knows all about sensitivity and everything!”


And, I just have to quote a bit from the end - a selection from the Guide itself - which transitions into the next book.


“The History of every major Galactic Civilization tends to pass through three distinct and recognizable phases, those of Survival, Inquiry and Sophistication, otherwise known as the How, Why, and Where phases. For instances, the first phase is characterized by the question How can we eat? The second by the question Why do we eat? And the third by the question Where shall we have lunch?”


Seriously, if you haven’t yet read these books, it’s high time you did. And don’t forget your towel.
Posted by Diary of an Autodidact at 4:12 PM