Black Canyon of the Gunnison


I had never heard of Black Canyon of the Gunnison National Park until a couple of years ago. My wife had always wanted to visit Mesa Verde (which I previously wrote about) in Colorado, so we decided to plan a trip. She also really wanted to see The Garden of the Gods in Colorado Springs, which meant that we were going to need to take an extended trip. I was curious if there were other sights we could see if we were going to go that far. A quick check of the map indicated that there was no reason we couldn’t give at least a brief visit to Great Sand Dunes National Park (see here) and Black Canyon of the Gunnison. (Next time, I want to see Colorado National Monument, but we didn’t have enough time this trip.)


Anyway, just like Great Sand Dunes, this place is one that I really want to come back and explore in more detail. I particularly want to hike down to the bottom of the canyon, which requires a full day and a wilderness permit.


There are a number of huge canyons in the West. Technically, Kings Canyon is the deepest, with over 7000 feet between the peaks and the valley. The Grand Canyon is clearly the biggest, stretching for a couple hundred miles at 12 miles across and a mile deep. The narrows at Zion are so narrow you can touch both sides - and the top is a thousand feet above.


But Black Canyon is unique because it combines features of all of these. It is pretty darn deep: 2700 feet - more than a half mile. It has a narrow opening and truly shear walls. In fact, the combination of depth and verticality means that the bottom gets direct sunlight for less than an hour a day. In fact, in many places, the canyon is significantly deeper than it is wide. It also is notable for unusual geology.


The cliffs of Black Canyon consist of gneiss (pronounced “nice”) and schist (which sounds a bit naughty if you aren’t careful), which are metamorphic rocks. For those who don’t remember their science courses in High School, metamorphic rock is formed when other rocks (sedimentary or igneous) are subjected to high temperatures and pressures. The most well known of these rocks is marble, which is metamorphosed limestone. Unlike marble, gneiss and schist have indeterminate origins: they could come from either sedimentary or igneous rock, but it is impossible to tell because of the high degree of metamorphic change.


The particularly interesting thing about the metamorphic rock of Black Canyon is its age. The rock is around 2 billion years old. Yes, that’s billion with a “B.” As in nearly half the age of the earth, and around the time the first eukaryotes appeared. We’re talking really early in the development of life itself. In fact, there aren’t a lot of places where we find older rocks. The primary source of older material is from meteorites, which tend to top out at ages just before the earth itself formed from the disk of material around the newly formed sun.


Because Black Canyon is in an isolated area, it doesn’t feel crowded compared to other parks. The campground was more empty than I expected for a Friday afternoon. This is definitely a place I wish to return to in the future. 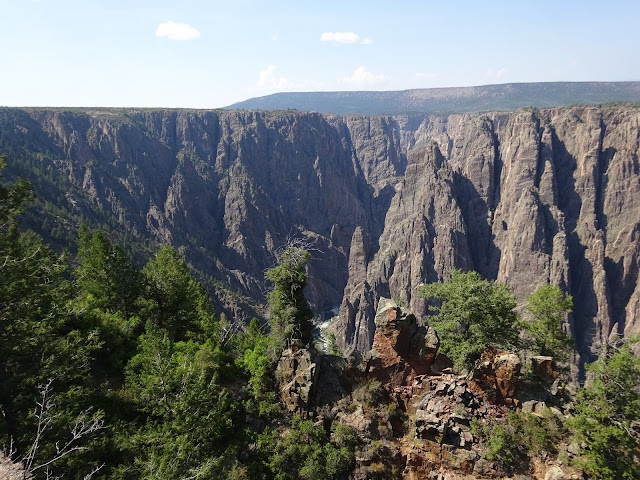 One of the more open areas of the canyon. 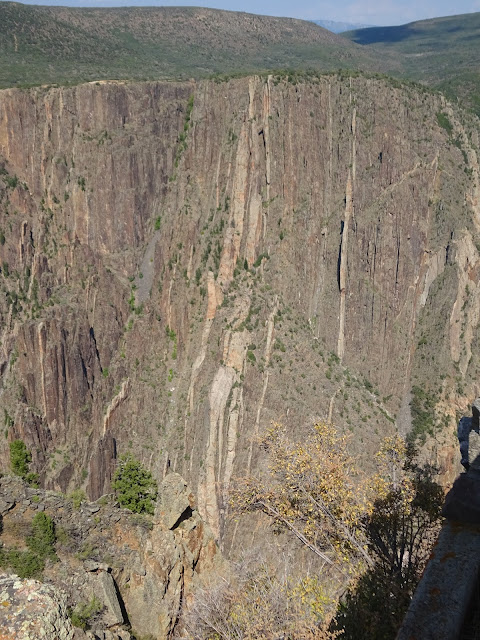 The view from the South Rim to the North Rim.
The cliff is pretty sheer on the other side, and the pegmatite is clearly visible within the gneiss. 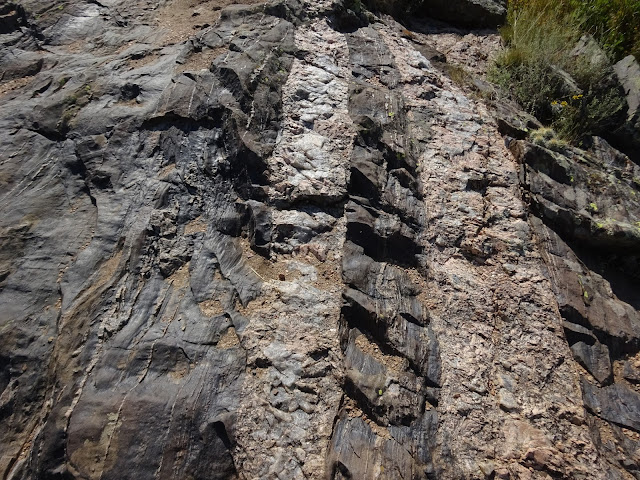 The dike runs across the canyon (the middle is eroded, obviously).
This is a closeup of both the gneiss and the pegmatite intrusion. 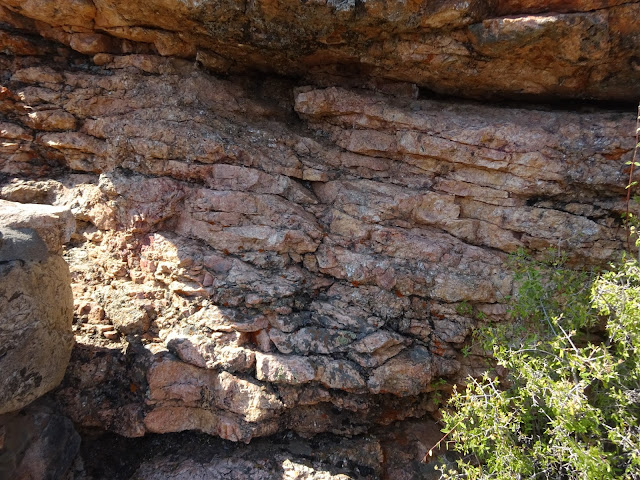 The pegmatite is quite beautiful up close. 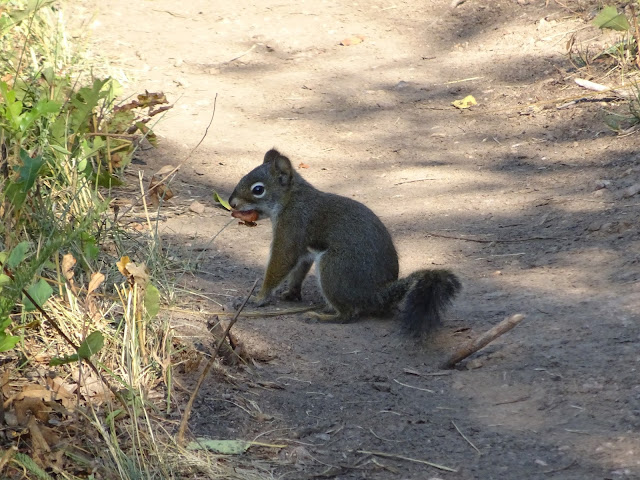 There was quite a bit of wildlife out and about. 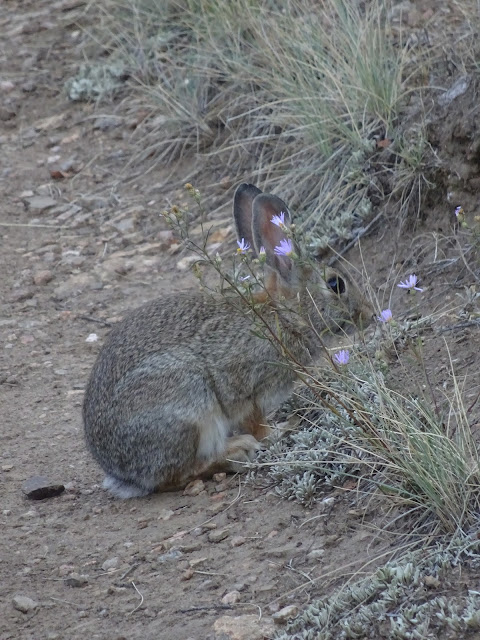 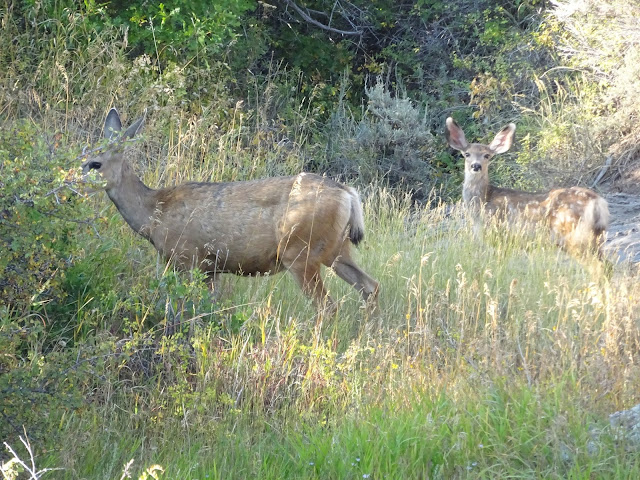 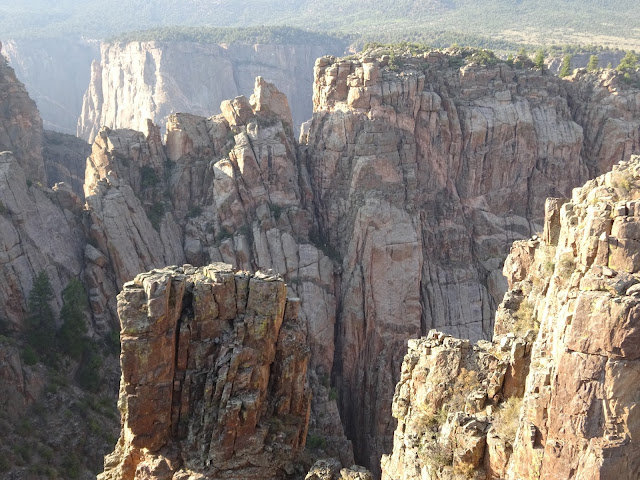 One of the views into the canyon, which snakes around this formation. 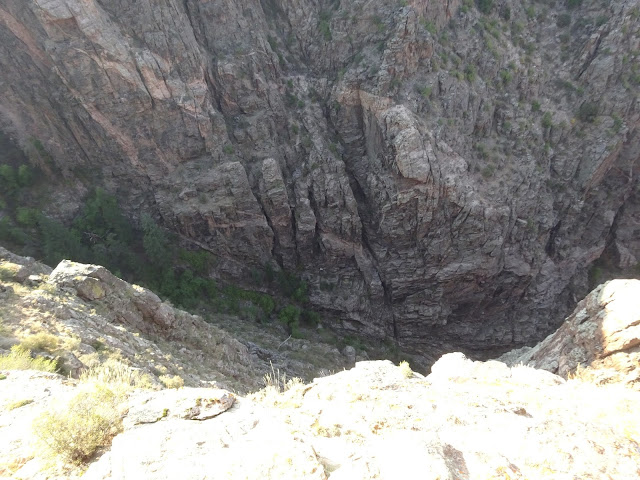 This view gives an idea of how shear and narrow the canyon is.
If I was a bit braver, I might have tried to extend out further, but I wasn't willing to risk the fall. 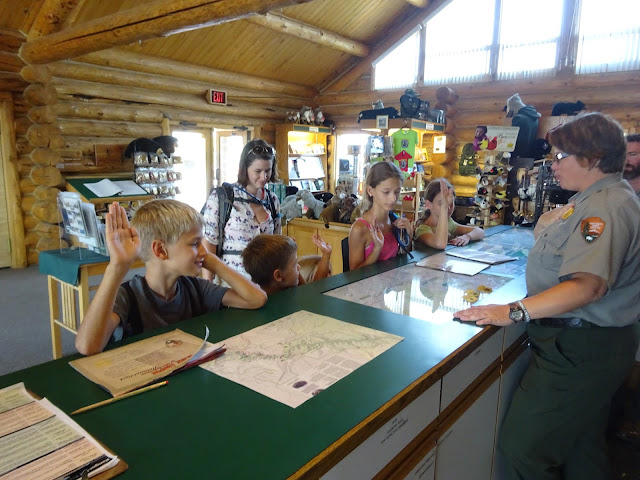 The kids taking the Junior Ranger oath. The rangers have a habit of throwing in extra stuff like "I promise to eat my vegetables" which cracks my kids up because they love their veggies - and don't understand why other kids don't.
Posted by Diary of an Autodidact at 10:07 PM