By general agreement, Shakespeare wrote 37 plays. I have had the opportunity to see 22 of them live in one form or another. (I have also read a few that I haven’t yet seen live.) In fact, looking back, I have seen all of these either with my wife (starting with A Midsummer Night’s Dream before we were officially dating) or with my kids (my wife and I saw these on different nights so we didn’t have to find a sitter.)


In the last few years, since the kids have been able to sit through - and thoroughly enjoy - live plays, we have seen a number that we hadn’t before. This was our first time seeing Love’s Labour’s Lost.


I have always been intrigued by the title. These days, people throw apostrophes around like they are free candy or something, regardless of where the should or should not be deployed. But Shakespeare could hardly have done so on a title of a play - and even if he did, someone would have corrected it. Well, it does turn out that there have been multiple titles, some with one, and some with two apostrophes. With one, the meaning is that the labor of love was lost. With two, thought, I suppose one could say that what was produced by love’s labor was lost, or alternately that the persons who engaged in the labor of love were lost.


Whatever meaning you wish to assign to the title, the play itself is a thoroughly convoluted and mixed up love story in the best Shakespeare tradition. In fact, I am a bit surprised that it is not more often performed, as it seems to be the sort of play that would resonate with modern audiences.


Here is the basic plot. The King of Navarre (or wherever you please - the place never matters in the comedies) convinces his three closest friends to make a vow that they will devote themselves to study and asceticism for a full three years. They will eat frugally, fast, and forswear women altogether. They will engage in the “manly” pursuit of knowledge and learning. 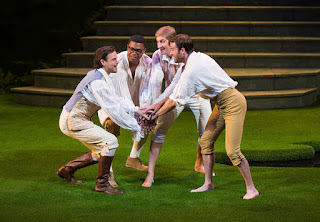 
There is a problem, however. The king has forgotten that the Princess of France and her ladies are coming to visit - to speak about important issues of state, naturally. This causes a problem, and Navarre forces the ladies to camp in the park rather than be entertained in the castle.


As one might expect, despite their best intentions, the four men all fall for the four ladies. But they cannot admit this to the others, for fear of being teased for breaking faith.


The women, of course, find this whole business hilarious, and do their best to punk the hapless men. Great hilarity ensues.


There are a couple of subplots. The ludicrous soldier, Don Armando vies for the hand of the country wench Jaquenetta with the equally silly Costard, a bumpkin who is much smarter than he appears. (In fact, he gets the best known line of the play, “They have been at a great feast of languages, and stolen the scraps.” (It is in this scene that Costard also uses “Honorificabilitudinitatibus,” the longest word in any Shakespearean work. (For what it is worth, it means “the state of being able to achieve honors.)


This line is directed at Holofernes, a tutor, and Sir Nathaniel, a clergyman, who are both ridiculously stuffy and pedantic. Their antics and the farcical attempt at a serious play-within-a-play at the end form some of the funniest scenes in the play.


Unlike most of the comedies, which end in a marriage, Love’s Labour’s Lost ends instead with the women extracting promises from the men to wait a year before marriage. This is, perhaps, a commutation of their self-imposed sentence of three years of study, but it is, nonetheless, a great example of the women getting their way - and appearing far more self-disciplined and wise than the men.


There are a number of outstanding lines in the play. In the opening scene, Navarre makes his friends sign their names to the oath. Berowne hesitates the most, and attempts to weasel out of it thus:


BEROWNE: Come on, then; I will swear to study so,
To know the thing I am forbid to know
As thus, - to study where I well may dine,
When I to feast expressly am forbid;
Or study where to meet some mistress fine,
When mistresses from common sense are hid;
Or, having sworn too hard-a-keeping oath
Study to break it, and not break my troth.
If study’s gain be thus, and this be so,
Study knows that which yet it doth not know:
Swear me to this, and I will ne’er say no.


I won’t duplicate the entire exchange, but it is worth reading - or seeing live.


Likewise, the repartee between the Princess and Costard is a joy.


One of the reasons, apparently, that this play is less popular is that it contains a lot of wordplay that requires knowledge of archaic words and phrases. Um, throw me in the briar patch! If there is anything I would enjoy, it is this sort of wordplay. Hey, I read old books all the time, so finding rare witticisms is like finding treasure.


Just a few words about the production. We saw this at The Old Globe in San Diego - one of our favorite cities to visit. A couple of years ago, we saw Pericles here - it was my youngest’s first Shakespeare play. In general, The Old Globe does an outstanding job. The production values are high, and the level of acting is good. The actors are a combination of theater students at the local universities and professional stage and screen actors. (Such is the advantage of living in Southern California. Many of the actors have had bit parts on television shows or movies.) The prices are not particularly low, though, and there are no discounts for kids, which I find annoying. However, the good outweighs the cost.


This production was set in the period (from what I can tell) of the France of Louis XIV. The costumes were delightful, and the set quite nice. This was staged in the outdoor theater, which fit the outdoor setting of the play perfectly.


I want to particularly note the actors which played the parts of Costard, Don Armando (who had the kids laughing non-stop), and Boyet (who was played as a dandy of the first water - hilarious and spot-on.) The women didn’t have the humorous parts, but they played their roles with sensitivity and wry humor. As I believe Shakespeare intended, they had a sort of detached amusement at the foibles of the silly men that they knew desired them but couldn’t come out and say without breaking the manly pledge.


This was a delightful play, and one that I think should be performed more often. Good acting can make clear the more obscure puns, and the humor directed at pompous education, asceticism, macho culture, emotional detachment, and the endless ability of humans to rationalize anything transcend time and place.


For those who care, we have seen the following: A Midsummer Night’s Dream, As You Like It, Twelfth Night, The Taming of the Shrew, Much Ado About Nothing, All’s Well That Ends Well, Comedy of Errors, Love’s Labor’s Lost, The Tempest, The Winter’s Tale, Pericles, The Two Gentlemen of Verona, The Merry Wives of Windsor, Henry V, Richard III, King Lear, Macbeth, Hamlet, Othello, Romeo and Juliet, Julius Caesar, and The Merchant of Venice.


Obviously, we are missing a few of the histories (which my wife has seen at the Utah Shakespeare Festival) and some of the less commonly performed ones. Perhaps I can collect them all some day.


For what it’s worth, this production was directed by Tony Award winning Kathleen Marshall. If you are in the area and get a chance to see this one, I recommend it.
Posted by Diary of an Autodidact at 10:10 PM