I first discovered Adichie through one of her TED talks, entitled The Danger of a Single Story, which eloquently spoke to the problems the result from listening only to a single source of narrative. 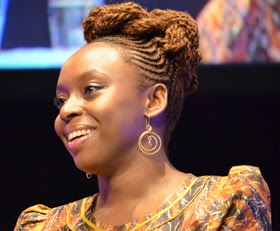 Adichie was born and raised in Nigeria, and studied medicine at the University of Nigeria before emigrating to the United States. She then switched her major to creative writing. Purple Hibiscus is her debut novel.

The story is told by 15 year old Kambili, and is set against the backdrop of the Nigerian civil war. Kambili’s father Eugene is a wealthy businessman, well respected for his generosity, and also the publisher of a newspaper notorious for telling the truth about those in power. Outwardly, Kambili lives a privileged life, but appearances are deceiving.

Eugene’s public persona is all good - and indeed he does much good for society and for individuals - but his family sees a different side of him. A fanatically devout Catholic, he expects perfect compliance and submission from his wife, son, and daughter. As the story progresses, his violent response to non-compliance, real or imagined, escalates.

The focus of his fanaticism is separation. Separation from those who are not religiously pure, and from all activities with any hint of paganism. He will tolerate on fellowship with those who do not share his hatred for African traditions. It is not entirely clear what motivates Eugene, or how he became so extremist. He is an enigma throughout the book. Even Kambili, though she loves him, cannot understand him. We never learn what pain in his past influences him, although he clearly has something in his craw, anger that boils over when it is triggered. The scenes of abuse are tough to read as his actions spill over into what could honestly be considered torture.

And yet, he isn’t merely a cruel abuser. He probably enjoys inflicting pain, but he also seems driven by fear that his children will be damned. He seems to be an admirable man in many ways, fighting against corruption and for the rights of the oppressed. He is truly generous to others - although not as much to his own family. But he does seem to have a pathological need for control.

For Kambili, there are two areas in which she incurs her father’s wrath. The first is when she fails to be first in her class. The other, which is a recurring issue, is that she loves her grandfather, Papa- Nnukwu, Eugene’s father. He still engages in pagan rituals, so Eugene refuses to see him. He allows the children to visit, but only for 15 minutes, and they may not eat anything. Even one minute beyond the allotted time, and they are punished.

In contrast to the stifling situation at home is the happy household of Aunt Ifeoma, who the children visit over a holiday week. I strongly suspect that the character of Aunt Ifeoma is a tribute to the author’s parents, as she shares a name with Adichie’s mother and a profession with her father. Even though she is widowed and poor, she is full of love and joy and acceptance. She is Catholic like her brother Eugene, but it is a different variety, focused not on exclusion but on community. Her tiny flat is crammed with books, and filled with laughter from the cousins, who are free to question and disagree - a totally foreign concept to Kambili.

During the course of the book, there is great civil unrest in Nigeria. A military coup results in shortages and violence against dissenters. No one is safe from the threats. The editor of Eugene’s paper is blown up in his own kitchen. Ifeoma’s house is ransacked by thugs working in concert with the police. The way the characters respond to these hardships reveals their strengths and weaknesses.

In the midst of all of this, Kambili also falls in love with a young priest - who appears to return her love, but who is also determined to keep his vows. This episode serves as an emotional awakening for Kambili, perhaps a safe place for her to feel what she is not permitted to feel at home.

I found this book to be a good read for a number of reasons. The writing is generally good, and the story is compelling. I also recognized Eugene’s philosophy all too well. The endless fear of contamination. The distrust of those with other beliefs. The need for control. This is precisely what is sold by cult-like organizations - and the heart of the Reconstructionist viewpoint. One is not to have any community outside of the cult, outside of the “likeminded” group. And there is the fear for one’s children if there is any compromise on this score. My family wasn’t like Eugene’s or anything, but his rhetoric certainly dominated some of the circles we ran in.

I was particularly struck by Kambili’s memory of the first time she was allowed to visit her grandfather.

I had examined him that day, too, looking away when his eyes met mine, for signs of difference, of Godlessness. I couldn’t see any, but I was sure they were there somewhere. They had to be.

In what is surely an ironic twist, while Eugene seems hell-bent on punishing his father until he converts, Papa-Nnukwu continues to pray in his pagan way for the good of his son. For Eugene, love and approval - and even acceptance is fully based on performance. Good grades, correct religion, absolute obedience. Papa-Nnukwu and Ifeoma are able to look beyond the differences and simply love.

In another poignant scene, Ifeoma and Kambili’s mother have a discussion about Ifeoma’s needs. Since the university hasn’t been able to pay her regularly, she is suffering from a lack of basic food and fuel. Kambili’s mother urges Ifeoma to ask her brother Eugene for help. Ifeoma remindes her that he offered before, but conditioned it on compliance with his will. Ifeoma would have to join certain religious organizations, change her daughter to an religious school. She would even have to stop wearing makeup. Ifeoma confesses that she would very much like nice new things, but she “will not ask my brother to bend over so that I can lick his buttocks to get these things.”

“Eugene quarrels with truths that he does not like. Our father is dying, do you hear me? Dying. He is an old man, how much longer does he have, gbo? Yet Eugene will not let him into this house, will not even greet him. O joka! Eugene has to stop doing God’s job. God is big enough to do his own job. If God will judge our father for choosing to follow the way of our ancestors, then let God do the judging, not Eugene.”

Therein lies the heart of it. Eugene - and many of us as well - feel compelled to force others into compliance with what we perceive to be God’s will. We use disapproval, shunning, and whatever means are at our disposal in our attempts to force them to do what we believe they should do.

Eugene not only fails to convert his father, he loses the hearts of his family. He ultimately sacrifices everything - his life included - on the altar of “purity” but saves no one. He has not built, only destroyed.

The book ends on a more hopeful note. I was curious if there was a sequel, as the story ends with a hint that there is more to tell. However, that story remains unwritten. Adichie’s subsequent books tell other stories, not this one.

As is common with books written in other times and places from our own, there are some things that are unfamiliar. The level of corruption in Nigerian society and the chronic shortages are things that we rarely face here in the modern West. Most of the characters mix English and Igbo in their speech. There are lingering wounds from colonialism that we probably don’t tend to acknowledge. However, I did find, again, that one of the benefits of reading literature from other places and times is that the common experiences of humanity shine through. Despite the differences in culture and experience, I could relate the emotions of the characters to my own experience. People like Eugene, Ifeoma, and Kambili exist all around us, but they are not always easy to recognise. And, like Eugene, we need to discern the difference between doing God’s work and doing God’s job.

Posted by Diary of an Autodidact at 9:43 PM