My thoughts on my Alma Mater, Oak Brook College of Law

“Where did you go to school?”

So how does one answer that question? In the past, I have just said that it is “based in Fresno, CA,” which is true in the most technical of senses. I still use it with most people. But how might one answer in a moment of true candor?

“I went to a law school founded by a home school cult whose leader turned out to be a serial sexual predator.”

And, while it too is technically true, it doesn’t capture the full truth. 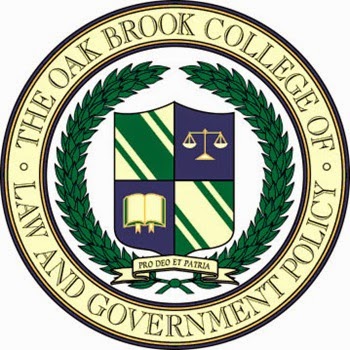 I’ve mentioned my involvement in Bill Gothard’s cult in several prior posts. While I have had to spend years deprogramming from the bad theology and poisonous cultural message, a number of good things did come out of my years there.

The first is that I met a lot of great people. Including my wife. (She wasn’t in Gothard’s organization, but ran in the same Patriarchal circles.) And also, plenty of friends. So I won’t complain about that part. In fact, one of the paradoxical things about cults is that they tend to attract great people looking for a better life. The same is true about other cults. I can think particularly of the Jehovah’s Witness kids that lived next door when I was a kid. Good people. But bat shit crazy theology. But cults also tend to attract seriously dysfunctional people too - and predators. So it’s a mixed bag. There are a few people I am glad I will probably never have to see again. But on the whole, my life is enriched by the friends I made and retain from those days.

The other positive to come out of that experience was my education. It’s hard to make a direct comparison between OBCL and a traditional law school because of the completely different approach. The better comparison would be with other “non-traditional” schools here in California.

Just to give a quick primer: California has a tough bar exam in compensation for relatively loose rules regarding law schools. Most states require that a school be approved by the American Bar Association, which means brick and mortar, and a very high cost. OBCL was and is “accredited” by the State of California, but not by the ABA, so graduates cannot sit for bar exams in all states. (The issue of eligibility is complicated, and I haven’t really looked into the status for other states lately. I was born and raised in CA, and here I wish to stay, so it is rather irrelevant for me.) OBCL is hardly California’s only distance learning law school. And some of those with physical campuses and/or live classes choose not to seek ABA approval. As a general rule, I approve of attempts to give the ABA competition. I would even go so far as to say that higher education in general has been more interested in “rent seeking” than in actually educating students at an affordable price. The cost of higher education has gone up far faster than inflation, making it increasingly difficult to afford. Thus, one of the purposes of education - social mobility - is reduced. But that is a matter for another post, perhaps.

While I can’t compare directly, I can make some observations from my own experience and from some hard statistics.

OBCL has the advantage of having a great bar passage rate. We have been in the top 25 for California pretty much since inception. I was in the inaugural class for the school, and we did well, setting a standard for those who followed.

Another advantage is a relatively low cost. I, and most of my classmates, managed to avoid student debt, which has been a serious advantage to me, and has given me a flexibility in choosing my career path.

I would also say that I had a generally positive experience. In general, I would say that the professors were genuinely interested in us, and helped to further our own goals, not just those of Gothard. I will especially note Robert Caprera, who was always willing to answer questions; Jordan Lorence (a few political differences notwithstanding), who was a blast to talk to and the best lecturer of the bunch; and Roger Magnuson, our dean, who sadly passed away from melanoma last year, who loved spending time talking with us - the complete opposite of an ivory tower academic. I look back with fondness to those times spent talking about law and life with them. In addition to the professors, I made connections with a number of fellow students, some of whom are friends to this day. Our e-mail discussions and dissections of each other’s essays were vital to my learning, and were a huge factor in passing the bar exam. (I should also give credit to the two attorneys that I worked for while in school - particularly my now father-in-law, who taught me the practical stuff that no law school really teaches.)

But still, how do I explain things?

Anyone who follows the news has probably seen this article in the Washington Post. For me, this was completely unsurprising. As I noted, I long ago realized that Gothard’s teachings were poison. I also realized that he was an empire-building narcissist at my graduation from OBCL.

Our keynote speaker was someone on the Texas Supreme Court. Decent speaker. Typical graduation speech. I can’t remember much from it, but I think it was good.

And then, Gothard spoke.

I probably expected him to say something about the opportunities that lay ahead of us. You know, we had futures. Most of us wanted to be able to earn a living. (Most of us have done well in that regard. The education was decent.) That was my personal concern. I chose OBCL (with a strong push from my parents) as my college option, so I would have been in a world of hurt if I couldn’t have found a job afterward. Did Gothard say anything about this? Um, nope.

Instead, he spent the entire speech talking about how we were destined to serve the Institute. His own personal empire. Yep, we were just pawns to further his personal power. Up until that time, I think I still had illusions that he was a decent guy, just with some peculiar ideas. But after that, it was clear that he wasn’t interested in our futures, unless they furthered his.

My writing of this post was triggered by the recent events. The truth has come out that Gothard has sexually harassed and in some cases sexually assaulted young girls over a 45 year period. Some of those I know from OBCL and IBLP have seen his tendency to pick willowy young women, and spend time alone with them. The victims include close friends of people I know, and even relatives of my own friends. Thanks to the magic of the internet, I have also discovered that there was a serious scandal back in 1980, long before my family ever attended a Gothard seminar. Because bad news was easier to hide back then, Gothard managed to escape consequences, and even solidify his power. This time, it hasn’t been so easy, and Gothard was finally forced to resign.

One good result of this has been that OBCL has severed ties with IBLP. (It is my understanding that there has been quite a bit of desire on the OBCL side to shed the Gothard ties for some time, and the scandal just made it possible.) Whether either IBLP or OBCL will survive into the future remains to be seen. I suppose if OBCL does fold, then I will be in good company with many of my local colleagues who graduated from a local law school that has since gone under.

Still, though, I am left in kind of an awkward position. On the one hand, OBCL graduates are well represented in my county, both in private sector and public sector jobs, and in our local bar association. So in my day to day practice, I am linked with some really great people. On the other hand, in the wider world, OBCL is still linked primarily to Gothard. Every so often, one sees a reference in an article to “Bill Gothard’s Law School,” or even worse, “Bill Gothard’s Fake Law School.” Or worst of all, one of the few alumni who still hold strongly to the Reconstructionist worldview writes an article blaming Doug Phillips’ clergy sexual abuse on women. (I won’t dignify the article with a link.)

Thus, I am proud of my education, and feel it was a positive event in my life; but cringe to be associated with the cult itself or its ideas.

With any major choice, there is always the question of “what if.” If I hadn’t taken this route, my life would be different. Would it be better, worse, or indifferent? I am not complaining, because I am truly blessed in so many ways. Law is a pretty good gig. But what if?

By my favorite poet:

The Road Not Taken
Two roads diverged in a yellow wood,
And sorry I could not travel both
And be one traveler, long I stood
And looked down one as far as I could
To where it bent in the undergrowth;

Then took the other, as just as fair,
And having perhaps the better claim
Because it was grassy and wanted wear,
Though as for that the passing there
Had worn them really about the same,

And both that morning equally lay
In leaves no step had trodden black.
Oh, I kept the first for another day!
Yet knowing how way leads on to way
I doubted if I should ever come back.

I shall be telling this with a sigh
Somewhere ages and ages hence:
Two roads diverged in a wood, and I,
I took the one less traveled by,
And that has made all the difference.
Robert Frost

And, from a more modern poet: