Cat on a Hot Tin Roof by "Tennessee" Williams

Source of Book: Borrowed from the library. This is one of the random books my wife selected for me.

In many ways, this play, written in the 1950s, is a perfect selection for an attorney who deals with the aftermath of death and inheritance on a regular basis. I get to see the fighting and hidden rivalries and hurts come to the surface when things go bad. Naturally, sibling resentment and greed are common factors in family disputes - as is the occasional dark secret.

As a quick summary: Big Daddy, a rich Southern planter, is dying of cancer, but the doctors and his children have kept this news from him and his wife, Big Mama. The older son, Gooper, is a respectable lawyer. He and his wife Mae have five-and-a-half children, and a great deal of resentment toward his parents and younger brother, Brick. In contrast, Brick is irresponsible and an alcoholic. He refuses to have sex with his wife Maggie - an open secret that is alluded to throughout the play. Maggie is frustrated, but is trying to hold Brick together.

The title of the play refers to the way that Maggie views herself. She is the uneasy cat on the hot tin roof, trying to find a way to safety. Also, Big Daddy refers to Maggie and Mae as cats on the proverbial roof, eyeing each other, trying to find an advantage.

Everyone in the family is keeping a poisonous secret from the others, and these secrets come out during the course of the play. Big Daddy hates Big Mama, and wants to have an affair with someone, anyone. Gooper has never gotten along with his parents, and resents that they do not appreciate him. Mae greedily yearns for the inheritance, and despises Maggie. Big Mama shows overt favoritism for Brick, referring to him as her “only son.” Maggie wants a child, and is frustrated that Brick doesn’t love her.

The big secret, though, is held by Brick, who drinks to keep the secret from himself. Brick is homosexual, and had feelings for his football teammate, Skipper. Maggie had suspicions about the relationship, and ended up in bed with Skipper, who was probably trying to prove he wasn’t gay. Skipper realizes that he cannot complete the act, so he calls Brick and confesses his love. Brick rejects him, and Skipper commits suicide. (This all occurs before the action in the play itself, which observes the classical “unities.”) After this, Brick escalates his drinking, and lets his life spiral out of control.

I don’t intend to spoil the ending. Or rather, endings. In the version I have, there are two endings, somewhat the same, but with significant differences. The first is the original, as Williams wrote it. The second is the ending as performed on Broadway, after director Elia Kazan, (who would collaborate with Williams on other plays, including A Streetcar Named Desire) requested some changes throughout the third act. I am torn as to which ending I like best. On the one hand, the Broadway ending appears that it would work better on stage, and suggests some changes in the characters as a result of the laceration that occurs in act two. On the other, I think that the original has a certain raw power about it. It also contains a great line that I wish had remained in the revised ending. I’m glad I read both.

The author’s introduction to the play is excellent, although far too long to quote here. In essence, he eloquently describes the tangled relationship between art and the personality of the artist that created it. Williams quotes from another of his plays, Orpheus Descending, “We're all of us sentenced to solitary confinement inside our own skins, for life!”

This idea makes particular sense in light of the relationship of this play to Williams’ own life.

Born Thomas Lanier Williams III in 1911, Williams later took up the name of “Tennessee,” perhaps as a nod to his ancestors from that state, or as a reference to his accent. He had an alcoholic father, and a strong relationship with his sister, who later suffered from schizophrenia. Williams himself struggled with alcoholism, and greatly feared that he too would sucumb to mental illness.

Also important for this play was his troubled relationship - or lack thereof - with his own father. Perhaps Williams identified with Gooper in this regard, while he clearly patterned certain of Brick’s traits after himself. Williams also was homosexual, although he made some attempts at heterosexual relationships.

Some thoughts on the play: the big theme is that of falsity, or, as Brick puts it, “mendacity.” This is a delicious old word that has a flavor of its own. Webster’s dictionary defines being mendacious as “given to or characterized by deception or falsehood or divergence from absolute truth.” This is the kind of falsehood characterized not by what is said, but by what is implied. It is the false impression intentionally left, even though the words are not, technically, untrue. I think this word is useful in describing much of the reporting and writing on politics. What is unsaid is more important than what is actually said. Williams skillfully weaves mendacity throughout the narrative, as the characters attempt to verbally assassinate each other through implication.

A great example of this is Big Mama’s exchange with Maggie early in the play, before the secrets are revealed.


BIG MAMA: Don’t laugh about it! - Some single men stop drinkin’ when they git married and others start! Brick never touched liquor before he - !


MAGGIE [crying out]: THAT’S NOT FAIR!


BIG MAMA: Fair or not fair I want to ask you a question, one question: D’you make Brick happy in bed?


MAGGIE: Why don’t you ask if he makes me happy in bed?


BIG MAMA: Because I know that -


MAGGIE: It works both ways!

Also notable is the casual cruelty of the doctor and the reverend, who both slink out as soon as they can to avoid the uncomfortable emotions. No comfort is offered, and neither is willing to involve himself.

Mae, in particular, is intentionally mean, lashing out in the cruelest way possible at Brick, and especially Maggie. Gooper thinks all the nasty things that Mae says, but he usually knows that they are best left implied rather than said.

However, in a great line that was left out of the Broadway version, Gooper makes an awkward, insensitive joke at the absolute wrong time. Big Mama has just been informed of Big Daddy’s terminal condition by the doctor, who urges her to “keep your chin up.”

Gooper jests, “She’s gonna keep both chins up, aren’t you Big Mama?” It really is too bad this line got cut.

One final line surprised me. Growing up, my dad occasionally used the phrase, “Yes siree, Bob!” I had no idea that this line was in this play. A quick search indicates that it probably originated in the mid-1800s in the South, so Williams presumably drew it from his own experience. Who knew?

Like many an unpleasant play, this one is not a fun or light read. However, it elucidates truth about human nature and relationships. Despite the different time and place it represents, it could have been drawn from any number of angry family feuds that I have been involved in professionally. The hurt and anger, the lack of respect for the “good” child, the character assassination, the hypocrisy, and above all, the mendacity are true to life. 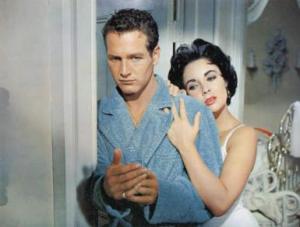 Paul Newman as Brick and Elizabeth Taylor as Maggie in the screen version of Cat on a Hot Tin Roof. The movie version downplayed the homosexual elements, and eliminated much of the stronger language in the original.
Posted by Diary of an Autodidact at 10:27 PM