North of Boston by Robert Frost

Source of book: I own the complete Robert Frost - a gift from a very special woman.

As part of my systematic reading of my poetry collection, I am reading through my favorite poet, Robert Frost, in chronological order. I previously reviewed A Boy’s Will. This is his second collection, North of Boston. 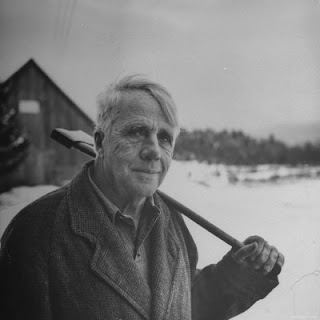 The two make for an interesting contrast. A Boy’s Will consists entirely of short poems, most with a stanza form and regular rhyme. North of Boston, with one exception, is entirely narrative poems in blank verse.

(Frost was particularly touchy about the confusion between free verse and blank verse. Free verse lacks both meter and rhyme. Blank verse is unrhymed iambic pentameter - the choice of Milton and Shakespeare and many others.)

North of Boston focuses on human interaction, particularly conversations. The poems tell stories, with twists and turns often reserved for the end. Despite the formal constraints of the poetry, the characters come alive through their words. Even laconic dialogue reveals the characters of Frost’s beloved New England.

I was struck again by the similarities with the short stories and sketches of Sarah Orne Jewett, who also lived in and wrote about the rural New England countryside and small towns. Both writers capture the essence of the cold winters, and hard scrabble existence, the lines of care etched on the faces as they draw out the deeply human and sympathetic qualities of their characters.

Here are a few that I particularly liked.


Something there is that doesn't love a wall,
That sends the frozen-ground-swell under it,
And spills the upper boulders in the sun,
And makes gaps even two can pass abreast.
The work of hunters is another thing:
I have come after them and made repair
Where they have left not one stone on a stone,
But they would have the rabbit out of hiding,
To please the yelping dogs. The gaps I mean,
No one has seen them made or heard them made,
But at spring mending-time we find them there.
I let my neighbor know beyond the hill;
And on a day we meet to walk the line
And set the wall between us once again.
We keep the wall between us as we go.
To each the boulders that have fallen to each.
And some are loaves and some so nearly balls
We have to use a spell to make them balance:
'Stay where you are until our backs are turned!'
We wear our fingers rough with handling them.
Oh, just another kind of out-door game,
One on a side. It comes to little more:
There where it is we do not need the wall:
He is all pine and I am apple orchard.
My apple trees will never get across
And eat the cones under his pines, I tell him.
He only says, 'Good fences make good neighbors'.
Spring is the mischief in me, and I wonder
If I could put a notion in his head:
'Why do they make good neighbors? Isn't it
Where there are cows?
But here there are no cows.
Before I built a wall I'd ask to know
What I was walling in or walling out,
And to whom I was like to give offence.
Something there is that doesn't love a wall,
That wants it down.' I could say 'Elves' to him,
But it's not elves exactly, and I'd rather
He said it for himself. I see him there
Bringing a stone grasped firmly by the top
In each hand, like an old-stone savage armed.
He moves in darkness as it seems to me~
Not of woods only and the shade of trees.
He will not go behind his father's saying,
And he likes having thought of it so well
He says again, "Good fences make good neighbors."


I spent a portion of my teen years building rock retaining walls, both for and with my family, and also to earn some money from neighbors. Even a well built wall tends to need regular repairs, so this was completely familiar. I also understand his neighbor’s point of view. If this is taken beyond the literal sense - and I believe Frost intends it that way - it speaks to the importance of boundaries, even between good friends who have nothing to fear from each other. That certain degree of separation creates a level of comfort. Perhaps this is particularly so for those of us who are introverts.


I was also reminded again of how good “The Death of the Hired Man” is. Within the space of six scant pages - 175 lines - Frost creates three memorable characters: Warren and Mary, the married couple whose dialogue forms most of the poem; and Silas, the old hired man, who comes “home” to die.
"Home," he mocked gently.    "Yes, what else but home?  It all depends on what you mean by home.  Of course he’s nothing to us, any more  Than was the hound that came a stranger to us             Out of the woods, worn out upon the trail."    "Home is the place where, when you have to go there,  They have to take you in."    "I should have called it  Something you somehow haven’t to deserve."


I loved this when I first read it in High School, and still love it now, when I have more reason to understand its truth. I also loved the description of Silas’ ordinariness - his utter lack of distinction.


Another poem I particularly loved from this collection was “The Mountain,” which recalled Jewett’s marvelous sketch, “An October Ride.” The wilderness, and mountains in particular, have a special place in my heart, and Frost’s description of the trail up the mountain as described by a local man reveals Frost to share the same sense of adventure. I love the opening lines:


The mountain held the town as in a shadow
I saw so much before I slept there once:
I noticed that I missed stars in the west,
Where its black body cut into the sky.
Near me it seemed: I felt it like a wall
Behind which I was sheltered from a wind.


The rest is too long to quote, but is well worth reading. I would also recommend “Home Burial” for its lacerating portrayal of the different styles of mourning displayed by a husband and wife after the early death of their child.


Great lines abound in these poems, ones that stick with the reader. From “The Code,” for example:


The hand that knows his business won’t be told
To do work better or faster - those two things.


Apparently, this truth has been lost on lousy managers everywhere.


Or this one from “The Housekeeper,” which tells of an illicit relationship gone bad.


I tell them they can’t get me through the door, though:
I’ve been built here like a big church organ.


I’ll end with a shorter poem, though still in blank verse, which blends the narrative form with the compact incident and thought of Frost’s previous collection.


Out walking in the frozen swamp one gray day,
I paused and said, 'I will turn back from here.
No, I will go on farther—and we shall see.'
The hard snow held me, save where now and then
One foot went through. The view was all in lines
Straight up and down of tall slim trees
Too much alike to mark or name a place by
So as to say for certain I was here
Or somewhere else: I was just far from home.
A small bird flew before me. He was careful
To put a tree between us when he lighted,
And say no word to tell me who he was
Who was so foolish as to think what he thought.
He thought that I was after him for a feather—
The white one in his tail; like one who takes
Everything said as personal to himself.
One flight out sideways would have undeceived him.
And then there was a pile of wood for which
I forgot him and let his little fear
Carry him off the way I might have gone,
Without so much as wishing him good-night.
He went behind it to make his last stand.
It was a cord of maple, cut and split
And piled—and measured, four by four by eight.
And not another like it could I see.
No runner tracks in this year's snow looped near it.
And it was older sure than this year's cutting,
Or even last year's or the year's before.
The wood was gray and the bark warping off it
And the pile somewhat sunken. Clematis
Had wound strings round and round it like a bundle.
What held it though on one side was a tree
Still growing, and on one a stake and prop,
These latter about to fall. I thought that only
Someone who lived in turning to fresh tasks
Could so forget his handiwork on which
He spent himself, the labor of his ax,
And leave it there far from a useful fireplace
To warm the frozen swamp as best it could
With the slow smokeless burning of decay.


Whether it is the self-absorption of the bird, the twisting clematis vine, or the hard work of splitting a whole cord of wood, Frost’s language brings a picture to life. I was reminded again of the way that the best writing is often the most transparent. Frost’s language feels so simple and natural - deceptively so. However, a close reading reveals just how much thought is packed into each line, each word. The seeming clarity of his verse conceals a delicious ambiguity and complexity waiting for the reader to discover. Frost may have been an early infatuation once, but I find I never tire of reading even as I age.
Posted by Diary of an Autodidact at 10:42 PM