I Only Ask That You Still Be My Friend: Reflections on 20 Years of Marriage

I only ask that you still be my friend

For there are many where friendship's unknown

They live together, but really alone

And the days go their ways in silence

We do not mean to have it so

I know that sometimes I'm harder to love

So won't you help me to help you be sure?

God only knows that I want to be pure

But the world keeps its promise of daily

But it can't hide what I have found

So I will love you and love you, I do

It's not complete yet, but you know we're not through

And the days go their ways in blessings, moments of truth

We truly dare not waste our youth

Today, Amanda and I celebrate 20 years of marriage. We married pretty young, not something either of us really expected, but we found each other and refused to let a good thing go to waste.

A couple weeks ago, this song came up on my commuting playlist, and it struck me yet again. I don’t have much religious music that I listen to these days, but Keith Green (and John Michael Talbot) have remained, both because they were so important to me as a child, and because of their musical merit. I didn’t understand “Love With Me” particularly as a kid, but it has become one of my favorites over the years because of its profound truth about good and enduring relationships.

Over the years, both professionally and personally, I have watched marriage come apart. And I have also watched marriages endure. Particularly for my generation, a big key seems to be friendship.

As far back as I can remember, this was my vision for a marriage. I wanted to marry my best friend. Everything else about a potential spouse was secondary to that. Friendship and mutuality came first.

The last thing I wanted was a marriage where we were performing roles. Performing masculinity and femininity, performing a “good christian marriage,” or, horrors!, portraying a hierarchy of “Christ and the Church.” (I’d be equally as willing for a dentist to be drilling…) The thought of expectations being based on the gender beliefs of a particular era being enforced against me was bad enough, and I certainly wanted no part of placing them on my spouse.

So, when Amanda and I met and got to know each other, we both realized that this could be a great partnership. And we decided that we would have that kind of marriage. Equality. Mutuality. Cooperation. And no commitment to gender roles.

I do not want to create the impression that we were cold-blooded about it. We had amazing chemistry - and still do. We are not good at keeping our hands off of each other, to put it mildly. But we also knew that our long term happiness depended on the friendship more than the sex.

You want to love with me? Love with me then. I only ask that you still be my friend.

I think that sums it up pretty well.

For there are many where friendship's unknown. They live together, but really alone.

And the days go their ways in silence, tense hours of woe: We do not mean to have it so…

Of course we have had our rough times - any two humans together will, even without a bunch of tiny, needy children like we had. But we have friendship, and we have never been “together but really alone.” I know so many whose marriages look like that, unfortunately, which is a reason many have failed. We did not mean to have it so...and we haven’t.

And the days go their ways in blessings, moments of truth

We truly dare not waste our youth

Amanda was barely 21 when we married. I was 24. The last 20 years have been wonderful in many ways. (And the ways in which they were not wonderful were not due to being married to Amanda - very much the opposite.) With our kids growing up, and Amanda continuing her education, our lives together are continuing to evolve and change. I look forward to our future together, knowing that she is my best friend.

You want to love with me? Love with me then. I only ask that you still be my friend. 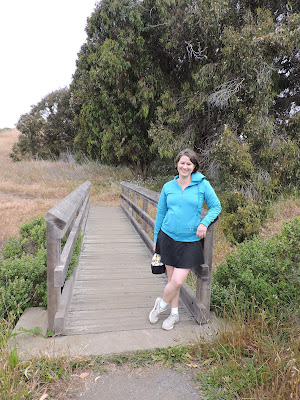 At Sonoma Coast State Park, on our recent anniversary trip.

Want to read more mushy stuff? Here is the list:

Love in the time of Covid-19

Posted by Diary of an Autodidact at 12:19 PM