Theofascism Part 1: Everyone Does It - Politics and Philosophy 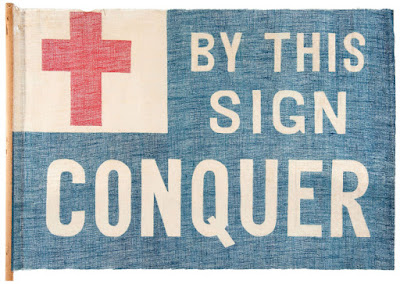 From the World Sunday School Association, circa World War One
Quoting Constantine and making an unfortunately comeback these days.

I intended to follow up with my post on why Trumism IS Fascism with a post on Theofascism, but realized that it really required several posts exploring different facets of the problem.

At the outset, let me just lead with a few basic ideas that will recur throughout the series:

1.         We do not live in a world or society where everyone shares the same beliefs.

2.         Your religion is not unique. If you would object to another religion doing something, don’t do it yourself.

5.         There is no meaningful distinction between theocracy and theofascism. Using government violence against non-believers is, well, inherently fascistic.

But let’s start with this idea. One of the common objections non-religious (or pluralistic) folks make to religious people is “we need to keep religion out of politics.” Which, well, Separation of Church and State and all, sure, but the statement is both vague and misleading. Here is what I believe:

Everybody brings their beliefs into their politics.

Because, how can you not? What we believe in one area of our lives affects what we believe in other parts too. More broadly, I would consider our beliefs about the world we live in to be best described as “philosophy.” I might have gone with “worldview,” but that is a loaded term in the Fundie circles I grew up in.

Broadly speaking, whether you are religious or not, we all hold beliefs about the fundamentals of existence: what is the nature of reality? What does it mean to be a good person? How should I treat others? What is the nature of evil? It is easy to recognize these as the great questions of philosophy. We are all, in some way, philosophers, whether we intend to be or not. It isn’t limited to religion, although religion is in its way a spectrum of philosophies. And we ALL bring these beliefs to our politics, whether we think we do or not.

This leads to the second part, which is crucial:

If your philosophy (or religion) is shitty, it will make your politics shitty.

Or, as a certain philosopher I admire put it, “A bad tree cannot bear good fruit.” The issue, therefore, isn’t whether you bring your philosophy to politics, but the quality of the philosophy you bring.

Let me give a few examples:

Both Rand and Gates were/are atheists. But what a difference. Ayn Rand (like the Libertarian Party) called for the repeal of all civil rights laws. In her view, it was worse for businesses to have to serve racial minorities than for racial minorities to be excluded. Segregation was better than the “Communism” that the Civil Rights Act supposedly created.

That’s a real shitty philosophy. Actually, Rand’s philosophy is best described as Social Darwinism, the belief that any governmental interference in economics lets the unfit survive, and punishes the more fit. Unsurprisingly, when you govern according to that philosophy - as the GQP has for the last 40 or so years - you get really shitty results. Soaring inequality, third-world level health outcomes for racial minorities, billionaires gaining even more political power, sinking wages, and so on. This has been bad for most people. Shit in=Shit Out.

Bill Gates, on the other hand, seems to have a philosophy that helping the weakest actually makes things better for everyone, which is why he has spent so much time, money, and political capital working on health outcomes in developing countries. This has resulted in significant improvements to the lives of many. Good Fruit in=Good Fruit out.

Two Renaissance figures that were immensely influential, for very different reasons. Francisco Jimenez de Cisneros was a key figure in the Inquisition and the late Crusades. He was “incorruptible,” with no obvious personal failings, and wholeheartedly devoted to his religion. He was also pitiless and cruel, and carried out mass persecution against dissenters in his own country and abroad. He perhaps more than any other figure embodies the Inquisition.

Desiderius Erasmus Roterodamus, on the other hand, was one of the early Humanists, combining devout Catholic faith with a deep belief in religious toleration. One might even say he was the father of religious freedom. Erasmus’ ideas greatly influenced the British, then the American reforms in the 17th Century that led to the end of the religious wars and the enshrining of religious freedom in the law.

There are plenty of others one could go with. Henry Ward Beecher, the abolitionist, versus Robert Lewis Dabney, Confederate chaplain, whose belief that black people are lazy and therefore should be denied any government assistance has become the de facto belief of the American Right.

Ibn Rushd, the 12th Century Muslim philosopher who seems shockingly modern on issues such as feminism, freedom of thought and religion, and tolerance. Or Ayatollah Khomeini, who famously called for the assassination of Salman Rushdie, for having the gall to question a few verses in the Koran.

You can see the two kinds of fruit - good and bad - in every religious (or non-religious) tradition. It isn’t the existence of religion or philosophy or its influence on politics that is the problem, it is WHICH beliefs are influencing politics.

In my experience, what most people object to when it comes to religion in politics will fit into the following categories:

2.         Persecution of people outside of the favored religion.

I hope to discuss these in future installments.

While this is specifically about Theofascism, which requires the use of government power, Theofascism is inseparable from the Culture Wars(™) that gave them birth. And these wars are being fought at multiple levels, not just at the level of government. It is being fought at the social level, with Cultural Fundamentalist communities and churches doing their best to exclude dissenters. And it is being fought at the family level - that’s my own experience as well. As Fundies see their numbers dwindle, their children reject their bigotry (yes, I use that word intentionally: see a future post), and their influence in the broader culture fade, they are becoming increasingly belligerent and even violent. (See the attempted coup at the Capitol.) Much of what this and future installments discuss may be most dangerous when it becomes a public policy goal. But it is also highly damaging to relationships at the lower levels as well.

Posted by Diary of an Autodidact at 3:04 PM