The Possessed by Elif Batuman

The Possessed should not be confused with Dostoevsky's book of the same name. Okay, the “Book Formerly Known As The Possessed” by Fyodor Dostoevsky. The title is usually translated Demons these days, or The Devils. It also should not be confused with the movies of that title in 1977, 2009, and 2018. This book is a memoir written by Elif Batuman, and is named in reference to the novel, which does make an extended appearance in the book.

My wife bought this book a number of years ago - probably close to when it came out, although I don’t remember exactly how she discovered it. She read it, and found it interesting, so I put it on my list of books to eventually read. It seemed to fit in between other books this year. (I try to avoid reading books on the same topic consecutively. I prefer to have a balanced diet. And, to be sure, this book was like nothing I have read this year.)

Batuman is the child of Turkish immigrants, graduated from Harvard and Stanford with an eventual doctorate in comparative literature, and wrote extensively for the New Yorker and Harper’s Magazine. This year, she released a novel (which is kind of ironic, considering her musings on novel writing in the memoir.) 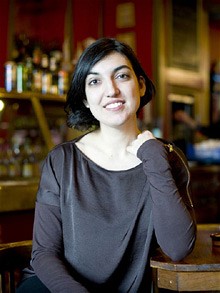 The book is about her time as post-grad student studying Russian literature. It is a rewrite of several essays in magazines, along with some new material.

In what is a pretty ironic twist, Batuman failed in her primary goal, which was to get paid to study Russian literature in Russia. Instead, she ended up settling for studying Uzbek literature in Samarkand. In some ways, this made sense. Batuman is fluent in Turkish (although perhaps in Russian too now), and Uzbek is essentially a Soviet amalgam of Turkish dialects from the area.

What follows in this book is her story of her adventures and misadventures on this trip. From her host, who pretty systematically cheated her out of any amenity including working plumbing, to her visits to sites connected with the great Russian novelists, to the eccentric and interesting people her area of study brought into her life, the book is filled with engrossing incidents. There are also sections where she discusses different Russian classics (including the title work) and how they fit with both her experiences and her evolving view of life, literature, and writing.

I’m not even going to try to summarize it beyond that. It is a fairly rambling, episodic memoir - which is kind of how life is anyway. I would say it helps to be familiar with the major Russian writers: Tolstoy, Dostoevsky, Pushkin, Gogol, and their major works. It also doesn’t hurt to have some knowledge of literary theory, as well as history.  I am by no means an expert (and have yet to read some of the books mentioned), but I have spent some time with many of the books. I would say that this book has been some incentive to make sure I put some Russian authors on my list every year.

One thing that I learned from this book was that Turkish and Russian are related - I am not a language scholar, so this connection wasn’t something that I was aware of. Apparently, the Soviets (the Russian ones, naturally), weren’t eager to acknowledge this fact, and tried to cover it up.

Also fascinating in this connection was the origins of the various countries which seemingly magically appeared after the fall of the USSR. (I remember sitting with my brother, going through our very first version of Microsoft Encarta and reading about all these “stans” which constituted south-central Asia. Kyrgyzstan had both the best paucity of vowels and the most interesting tune for its national anthem.) These never really showed up on a map before the rise of the USSR. So where did they come from?

Batuman explains at the time that England was colonizing India, Tsarist Russia decided it needed to make a countermove. It took over the fringes of the Ottoman Empire - a region of tribal groups speaking various Turkish dialects known to outsiders as “Turkestan,” and classified the residents according to a fairly fictional and arbitrary set of groups. The “Uzbek, Tajik, Turkmen, Kazakh, and Kyrgyz” didn’t really exist in any recognizable way, but the Russians nonetheless pounded these round pegs into square holes, and annexed the whole thing. These groupings became geographical SSRs, and when the Soviet Union disintegrated, these newish nations emerged as the closest thing to modern nations these regions had known. As part of this, the Uzbek language (and others, I believe) were essentially created from an awkward mashup of dialects, and forced on the people. Not that this is much different from the way national boundaries in the Middle East were drawn by the Allies after the world wars.

I’ll mention a few passages that I particularly found amusing, although these are by no means all of them.

One concerns Isaac Babel, who I wasn’t familiar with - probably because he was exterminated in Stalin’s Great Purge, despite being part of the Communist revolution, and his name and works removed from Soviet records. (This came to light in the 1990s. Also, he ran afoul of the regime primarily because he had an affair with the wife of an NKVD boss. Not his most intelligent move.) Anyway, Babel’s works are mentioned throughout the book. One really stuck with me. Batuman was reading Red Cavalry while baking a Black Forest cake. Apparently, the cake was a disaster.

As Babel immortalized for posterity the military embarrassment of the botched 1920 Russo-Polish campaign, so he immortalized for me the culinary embarrassment of this cake, which came out of the oven looking like an old hat and which, after I had optimistically treated it with half a two-dollar bottle of Kirschwasser, produced the final pansensory impression of an old hat soaked in cough syrup.

Leaving aside the great word picture, I noticed it because my wife makes a fantastic Black Forest cake, complete with a more moderate amount of Kirschwasser, which is pretty much everything this cake was not.

There are a number of quotes from Uzbek (for lack of a better word) poets in this book. After all, Batuman was ostensibly in Samarkand to research Uzbek literature. As noted above, this was a total misnomer, and she had to settle for the writers native to what would eventually become Uzbekistan. One of these is the poet Navoi. I am not sure exactly how these poems sounded in the original language, of course, but there is a certain unintentional comedy factor as Batuman renders them. And I am someone who has a love for poetry. Here is an example that made me smile.

Was it my heart - a bird - that was caught in your locks that unfortunate night,
Or was it bats of some kind?
Remember, the sultan dooms to death even his closest friend
If he learns the latter has secreted away money from the treasury.
Speak, Navoi, if love has not yet crippled your soul -
Why do you spew blood whenever you sob?

There are a few more quotes throughout the book, and they are a bit unusual to say the least, to someone who is more familiar with the English poetic tradition.

I’m still not quite sure what to make of this book. It was interesting, amusing, and kept my interest. But it is also not for everyone. There are certainly moments where I think she might have been a bit more concise. And also moments when I think she wallows in her personal feelings and romantic drama. But it is a memoir, so you expect that along with the fun stories.

For what it’s worth, I read a bunch of Tolstoy short stories in my teens - mostly the parable or religious ones. Since then, I have continued to read from my collection. You can read my impression of his stories about the Crimean War here. A couple years ago, I finally got to War and Peace. I hope to read Anna Karenina one of these days.

But, the strongest impression was when I read his three best known novellas. The Death of Ivan Ilych was good, but it was Family Happiness and The Kreutzer Sonata which marked me deeply, upending a lot of what I had thought about sex and marriage. It was really my first introduction to a viciously anti-sex and anti-woman philosophy - except that after I read it, I couldn’t help noticing how much negative influence Tolstoy (and St. Augustine) had on Evangelical teachings on sex and sexuality. These books also rather confirmed my suspicions that marriage wasn’t just a matter of following the right formula or gritting one’s teeth and being loving. Compatibility - sexual and otherwise - was crucial. It is no accident that I intentionally talked about the philosophy of sex before I ever asked my wife out. Fortunately, she is both a good sport and a fellow lover of books, literature, and deep discussions. We are, shall we say, a match.

My brother and I both read The Brothers Karamazov in our late teens, and both enjoyed and found ourselves a bit bewildered by it. I listed the chapter “The Grand Inquisitor” as an honorable mention in my list of most influential books. I have returned to that chapter multiple times, and think that it is still the best thing ever written on toxic religion. I have also read Crime and Punishment and Notes From Underground, both of which were fascinating.

I still have yet to read Gogol and Pushkin. They are on my list.

Whatever my deficits in Russian Literature, I have played a fairly good number of the great Russian classical works, both 19th Century and Soviet era. Comparing the literature to the music is a fun exercise.

Probably the oddest Russian book I have read, though, is The Master and Margarita.
Posted by Diary of an Autodidact at 9:12 PM