Source of book: Gift from a friend.

This is a bit of an unusual book for the blog - it falls in the category of “coffee table book” although it is a good bit smaller than that image invokes. It is heavy on the pictures and light on text, more for perusing and enjoying, than spending time engrossed in a narrative. This isn’t a bad thing, obviously. Different books for different purposes.

Let me start out by disclosing that I am a cat person. I have had cats nearly continuously since age 5, and seriously love them. I love how they purr, I love the soft spot behind their ears, I love the way they sleep in specific shapes I dub “catiforms” (like cuneiform, but with cats…), and I like the way they aren’t perpetually needy. This is not at all to say I hate dogs. I actually like most dogs - just not Pomeranians, with which I have a long history of mutual dislike - and dogs mostly like me. I’m just a cat person.

So anyway, a friend picked up this little book for me last Christmas, and I read it.

The Hermitage is the State Hermitage Museum of St. Petersburg, Russia. This museum was founded by Catherine the Great as a place to house her private collection. She located it next to her winter palace in St. Petersburg. Later, it was opened to the public. These days, it has expanded to five interconnected buildings - including the palace itself.

The Hermitage is famous for its cats. Famous enough that the cats have their own press secretary. Originally brought in by They live in and around the museum, keeping the rodents at bay, and entertaining visitors. In addition to the living cats, the museum also has a number of works of art featuring cats, many of which are reproduced in this book.

The text portions of the book cover the history of feline domestication around the world. (Russia was a rather late adopter.) The history of humanity is largely one of agriculture - and with agriculture came granaries - and with granaries came rodents. Hence, the need for cats, to protect the precious grain from the insatiable rodents. It has long been known that cats have been domesticated for at least the last 5,000 years - the Nubian breed is a point where the wild crossed into domestic. However, more recent discoveries show that cats and humans go back much further. A grave in Cyprus has both human and feline bones dating back 9,500 years. This is highly unlikely to be a coincidence: wild animals were not buried with humans.

Obviously, Ancient Egypt gets some love. There are plenty of cat-themed artworks from there. Europe was interesting for a different reason. While Pope Gregory I reportedly had a kitten he carried with him everywhere, by the Middle Ages, cats were viewed as in league with the Devil, and thus mistrusted. And of course, they were equated with witches. Cats were burned at the stake along with women. We still see this in the trope of the “catty woman.” Even now, in certain circles, cats are viewed as “feminine” pets, with dogs as the “manly” companion. 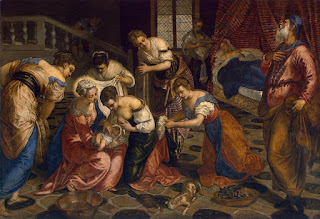 The Nativity of St. John the Baptist, Tintoretto (1554)
Note the allegorical cat trying to kill the chicken.

The art followed the views. Even during the Renaissance, cats are depicted as malevolent creatures. Later, the prejudice softened, and cats are pictured as a normal part of domestic scenes.

I found the section on China to be interesting. The primordial cat was named Mao - both phonetical and interesting in light of later politics. In China, as in Egypt, the relationship of rodents, food, and cats is depicted in some rather striking artwork. 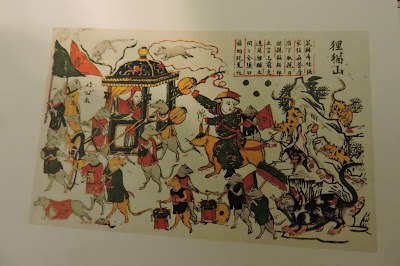 Japan too viewed cats as royalty. None less than Muhammad taught that cats had a special place in paradise. (I for one would find a paradise deficient without a cat.)

One final bit that was pretty interesting was the various Russian tales of cats and mice. Usually the cats win, but more memorable are the tales in which the cat is finally caught by the mice. They throw an elaborate funeral. Sometimes, the cat is indeed dead and the mice celebrate. Other times, the cat awakens and eats the mourners.

The book is short and fun, and does make me want to visit The Hermitage some day.

And, because I know you want to see a couple more cat pictures, here is my little companion. Chocolate Chip is ostensibly my youngest daughter's cat, but she knows a cat person when she sees one. She likes to purr and cuddle while I am reading after the kids go to bed. And, while I typed this post, she took up half my chair. 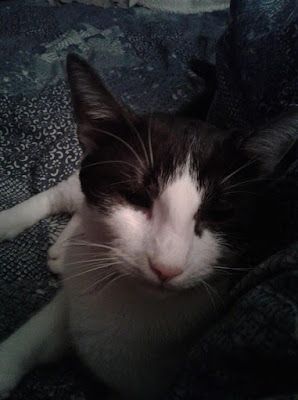 Come on, scratch behind my ears again... 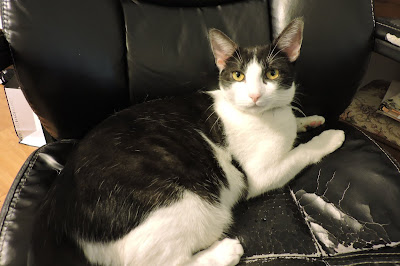 What? You think you get the whole chair?

Posted by Diary of an Autodidact at 4:31 PM